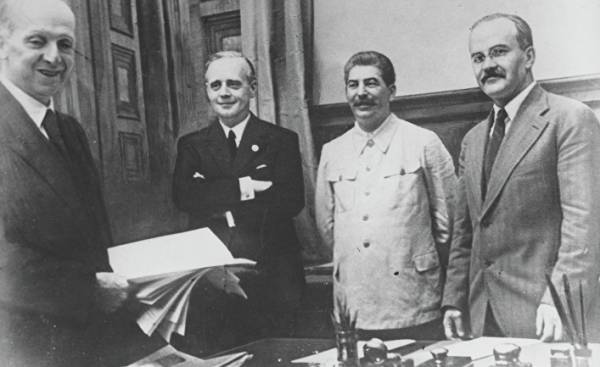 I’m not going to pay attention to the fact that under the terms of the Treaty of Versailles Germany was forbidden to build and test airplanes, tanks and chemical weapons. But in the mid 20-ies in the USSR the Germans had established an aviation school in Lipetsk, tank school in Kazan, and two aerogematiceski station near Moscow and the Volga. The cooperation of the red army and the Reichswehr with the code names “Lipetsk “, “Kama” and “Tomka” was done contrary to the Versailles Treaty, but the Soviet side received “remuneration” for the use of these facilities and the right to participate in the German testing and development.

In August 1939, a German delegation headed by foreign Minister Joachim von Ribbentrop arrived in Moscow, and the following night the Molotov-Ribbentrop Pact was signed by Vyacheslav Molotov, in the presence of Joseph Stalin. A ten-year nonaggression Pact, said the continued commitment of both parties to the Berlin Treaty (1926). The agreement was supplemented by a secret Protocol that divided Eastern Europe into German and Soviet zones of influence.

After the war, German officials found the microfilm of the secret protocols of the Molotov-Ribbentrop Pact gave them to US. Despite the publication of the protocols in the media, for many decades the Soviet Union denied the existence of the secret Protocol. In 1992, after the collapse of the Soviet Union, the document was declassified.

A week after the Pact was signed Molotov-Ribbentrop Pact, 1 September 1939, Germany invaded Poland. On 3 September 1939, Britain, Australia, New Zealand and France, fulfilling their obligations to the Republic of Poland, declared war on Germany. Germany was in economic isolation.

Entry into the war of France and England cut off from its supplies. Import of important raw materials — oil, iron ore, copper fell to a low level crisis. The German economy depended on imports, has been on the verge of collapse. The German war machine was only saved by an economic agreement with Moscow.

Britain blockaded Germany’s access to the sea, and informed the Union about the blockade of Germany and of the intention to inspect and detain vessels which will transport the cargo, enhancing the German military potential.

The British believed that the naval blockade would be for the Nazis painful blow. But Hitler reassured his generals: “We should not be afraid of the British blockade. The East will supply us with grain, cattle, coal, lead, zinc. All German cargo vessels in the ports of Germany were sent to the Soviet port of Murmansk. On 8 September, the Soviet side agreed to transfer the cargo by rail to the port of Leningrad. At the same time, the Soviet Union refused to allow a Polish transit through its territory citing the threat of being drawn into the war.

8 Sep 1939 Molotov prematurely congratulated the German government with the entry of German troops into Warsaw.

9 Sep 1939 the people’s Commissar Voroshilov and chief of the General staff Shaposhnikov signed a Directive that ordered the troops in the night from 12 to 13 September, to go on the offensive and defeat the Polish army. But it turned out that Warsaw is still holding. The red army offensive was postponed. The poles desperately defended their capital, men and women dug trenches and built barricades.

September 10, 1939 the people’s Commissar for foreign Affairs Molotov invited the German Ambassador Schulenburg and warned that Moscow intends to declare that Poland was falling apart and the Soviet Union is forced to come to the aid of the Ukrainians and Belarusians (Familiar?).

The defeat of Poland was carried out by Germany, with the full support of Stalin. This meant that the two greatest totalitarian state in the world become partners.

The Soviet leadership had agreed with the war and wanted to profit from it. In the newspaper “Izvestia” published the article “War at sea”, a promise to supply Nazi Germany with raw materials. The response of the Soviet government of England was composed in extremely harsh terms. The Germans were satisfied, the Minister of propaganda Joseph Goebbels ordered the report on Soviet positions on the front pages of German Newspapers.

One of the first gifts to the Nazis, Stalin was 600 German Communists (most of them Jews) in Brest-Litovsk. The Soviet Union also gave support to the Nazis in an official statement. Stalin emphasized that the Anglo-French Alliance to attack Germany, and not Vice versa, and Molotov affirmed that Germany had made peace efforts, which were rejected by the “Anglo-French imperialists”.

In October 1939, with the consent of Hitler, Soviet troops occupied Estonia, Latvia and Lithuania.

Also in October 1939, Stalin sent Molotov to Berlin to negotiate the terms of accession of the USSR to Germany, Italy and Japan. Moscow and Berlin issued a joint statement regarding the outbreak world war II.

All the Communist parties of the world got Stalin’s order to stop anti-fascist propaganda.

The Secretariat of the Comintern stated: “Britain and France have become the aggressors — they went to war against Germany and trying to broaden the military front to turn a war started by them in the anti-Soviet war.”

European Communist parties were instructed to cooperate with the German occupation authorities.

Stalin and Molotov broke off diplomatic relations with the governments of the occupied European countries in exile and recognized the puppet government that was created by Germans in occupied countries. It was the recognition and the actual approval of all the conquests of Hitler.

In 1940 more than half of Soviet exports went to Germany. In total, Hitler received from Stalin oil, grain, copper, Nickel, tin, molybdenum, tungsten and cobalt is a strategically important material, without which the military industry in Germany stopped. In no other country the Nazis would not have bought it.

Vital for Germany was the Soviet supply of food. Almost a third of the German population worked in agriculture, but the country could not feed itself. Military victories in 1940 did not reduce Germany’s dependence on deliveries from the Soviet Union. The Germans raised the issue of doubling the supply of grain, which have already reached 1 million tons per year.

And received the consent of Stalin and Molotov followed a policy of appeasement of Hitler and was going to make serious concessions in trade and economic Affairs. They volunteered to print the strategic grain reserves of the USSR, to meet the request of Hitler. In the spring of 1941, the Germans complained that the price of wheat and rye for them is high, and Moscow has thrown off the price by 25 percent.

The German military command has received the consent of Moscow to refuel submarines and warships of the Navy of Germany on the Soviet bases. The Soviet Union also helped Germany to avoid British naval blockades, with the submarine base in the Northern part of the Soviet Union in Murmansk.

June 3, 1941 a secret decision of the Politburo approved the “special reserves” to supply to Germany of thousands of tons of strategic raw materials, military industry: copper, Nickel, tin, molybdenum and tungsten. Some of the raw materials, the Soviet Union bought in other countries and delivered in Germany. It was a rare metals and rubber, without which it would have motorized units of the Wehrmacht a few weeks stopped.

Between 1939 and 1941 Stalin supplies Hitler, 1.5 million tons of oil, 1.5 million tons of grain and many thousand tons of rubber, timber, phosphates, iron and other metallic ores, in particular chrome, manganese and platinum. It is a trade agreement with the Soviet Union helped Germany to overcome the blockade.

The last echelon of Soviet grain to Germany passed through the Western bug river in Terespol 22 June 1941, over one hour and 15 minutes before the attack on the USSR. By the way, it is still not paid.