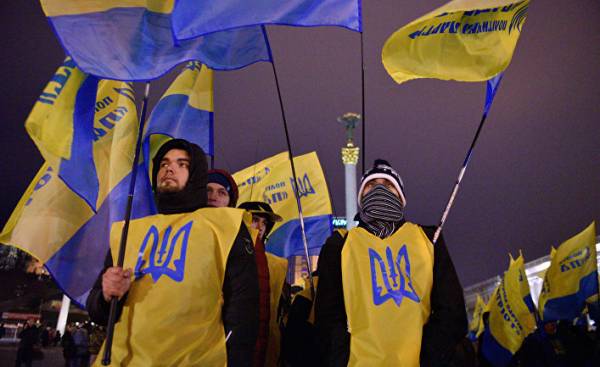 During the Ukrainian revolution of 2014 almost all of the time, it was possible to hear the Ukrainian national anthem “Sche not vmerla Ukraine”. The demonstrators on the Maidan in Central Kiev sincerely and in a loud voice sang a sad, minor key, but in a sense, optimistic anthem. Everyone knew that for the country again came a crucial time and, according to the name of the national anthem, the situation could develop in both directions.

Three years later, Ukraine became another country. Russian aggression, the annexation of Crimea and support for Pro-Russian rebels in Eastern Ukraine has United the country, which since independence in 1991 was divided roughly in the middle that can be called Russophobic part in the West and in Kiev and Pro-Russian part in the East. This was confirmed by a public opinion poll in April this year. He showed that 92% of respondents consider themselves to be ethnic Ukrainians. That’s more than 78% in 2001.

Many of those who in 2001 identified ethnic Russians, thus, was reborn as the Ukrainians. But this is only one moment in which is manifested the national beginning. The construction of the Ukrainian nation is very fast, and the greatest help in this question comes from Russian President Vladimir Putin. He is considered the worst enemy of Ukraine. As the old adage States that a few things can unite people like a common enemy. This role of the enemy in Ukraine is brilliantly performed the Russian President. More than 10 thousand people died as a result of the war in the East of Ukraine.

The hymn says that the enemies have contributed to the fate of Ukraine. During the Russian revolution of 1917 and the subsequent civil war, the various sides involved in the fighting, 14 times occupied the capital. Ukrainian weakness many to do with the fact that throughout history the country was torn by contradictions. These contradictions are largely due to a complex relationship with its neighbors, Poland and Russia, which throughout the history was considered by Ukraine as “their” territory. Her name Ukraine got from the poles, and it’s pretty humiliating means “suburb”. Not the best name given to the country and Russian — Ruthenia.

Before the revolution of 2014, Ukraine, as before, was weak due to internal contradictions and external pressure. In every election the country was divided roughly in half by the “Western” Ukraine, often referred to as nationalist, and “East”, whose population wanted to maintain close relations with Russia and preserve the Russian language and Russian culture.

Putin’s aggression — at least currently — almost shot this conflict dimension. National consciousness grew. Paradoxically and against their will the Russian President is a powerful Builder of the Ukrainian nation.

It was planned wrong. In the summer of 2014, attempts were made to take control of the administration of Kharkov and Dnepropetrovsk, as was done in Donetsk and Lugansk. The strings pulled people associated with the Russian intelligence. But despite the fact that for most of the population of these cities native language was Russian, to establish control over these cities failed — and then failed to create the same situation as in Donetsk and Lugansk. If this is successful, Ukraine could be divided into two approximately equal parts.

Now instead, the first time in history is one country with one national idea. And thanks for this need of President Putin.

Weather in Ukraine: a little cooler and some thunderstorms