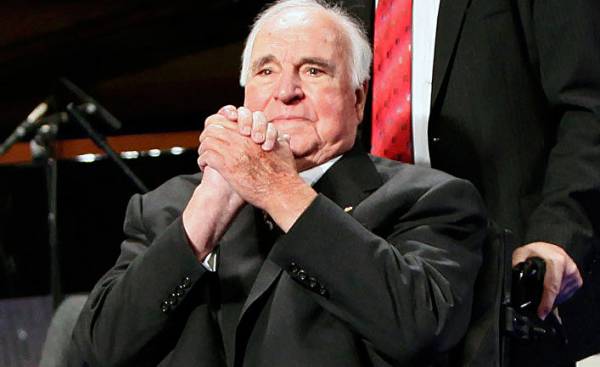 Two days before the annual Congress of the ruling party CDU in September 1989, Helmut Kohl was hospitalized in the West German capital of Bonn. The decision was unambiguous: he must be operated in connection with prostate problems.

The answer of the Chancellor was even less clear: “Nein!” Outside the hospital he was waiting for the story, Since they could not waste time. He was harshly criticized in the party, which lost elections in several Federal States, it was expected that the Congress of the President shifted from his post. Endangering their own health, Since participated in the Congress to thwart the coup. But nobody even tried to make revolution after Chancellor was able to announce that his Hungarian counterpart, Miklos Nemeth just had barbed wire on the border with Austria, to give the refugees from the GDR to freely go to the West. The opening has been timed to the Congress, and the resistance Helmut Kohl failed.

Two months later the Wall fell and a year later giant Kohl wrote his name in history as Vater der deutschen Einheit (“father of German unity”). But the plans of the conspirators at the party Congress strengthened his already strong sense that the world, including his own party, can be divided into friends and enemies.

16 years in power in West Germany and United Germany

How much must seek power, how much power should be put on to achieve and keep his position that cannot hinder them neither time nor history. 16 years, Kohl was in power in Western Germany and then in reunified Germany, 25 years he headed the CDU, whose leader today is his protégé Angela Merkel. As he sought power, Helmut Kohl, as it was difficult for him to accept the honorary post of the so-called honorary Chairman of the party, when he finally had to leave in 1998.

Time after many years at the heights of power and after participation in the writing of world history has not been happy for Helmut Kohl, which was destined to endure personal tragedy and fierce battle with their successors in the political arena — until his death at the hospital in Heidelberg. In the intensive care unit of the hospital, he spent several weeks after surgery on the intestine. Helmut Kohl, who in the last years of his life spent much time in the hospital and whose condition was deteriorating was 87 years old.

His successors as President, the current Minister of Finance Wolfgang schäuble, and then newly made Secretary General of the party, Angela Merkel, had to accept the fact that as remained in the leadership and acted as if all were still he. When a meeting of the leadership of the party came to an end, he immediately took out a pocket calendar and reported when and where he has the time for the next meeting.

The desire to dominate and the style. It was difficult to understand why Helmut Kohl, even in a time when he was Chancellor retired, as it is called in Germany, was in a violent confrontation with his younger colleagues and journalists; we can say that in Germany it was “a bad bill”.

When Angela Merkel meet the press in Berlin last year, which was attended by the author of these lines, was asked how nick, the answer was not particularly cordial.

“I think it’s all good. I regularly communicate with him, but can’t say when we last spoke to each other. Well, he kept trying to give me advice,” said the Chancellor, who grew up in East Germany, but which Helmut Kohl at the time took him in and called simply Das Mädchen (“girl”), about what Angela Merkel is probably not too nice today to remember.

The relationship between the giant and his student were tense as Angela Merkel a year after the departure of Helmut Kohl as Chairman of the party published in the newspaper Frankfurter Allgemeine article, which distanced themselves from him. At that time Helmut Kohl was charged in connection with the scandalous case of the illegal aid of the party, which in 2000 cost him his post of honorary Chairman. Relations hardly improved in 2014, when on the occasion of the 25th anniversary of the fall of the Wall came two books dedicated to the eternal Kohl’s new autobiography and the book is based on 600 hours of interviews with the former Chancellor.

In the heart of the book “Vermächtnis — Die Kohl-Protokolle” (“Legacy — the Kohl protocols”) — the endless interviews that former journalist Heribert Schwan (Heribert Schwan) was taken in 2001 and 2002, home at Kohl’s, or rather in the basement of his house in Oggersheim far from Mannheim. Subsequently, Helmut Kohl, wanted to prevent the publication of the book, which led to a long feud between them.

The most famous quote from the book is dedicated to Angela Merkel: “Merkel did not even able to use a knife and fork. The official government receptions she behaved so ugly that I had to repeatedly call her to order,” says Helmut Kohl in the book.

In it, he criticized the policy of Angela Merkel during the financial crisis, when she demanded that southern Europe has reduced the cost. “Die macht mir mein Europa kaputt” (“She’s ruining my Europe”), wrote to Helmut Kohl in the book about Angela Merkel. From a critical attitude Merkel to Russia in the conflict in Ukraine, he also was not thrilled. In the opinion of the predecessor, Angela Merkel is not particularly versed in big international politics.

Ironically, Helmut Kohl, had just become Chancellor, and was criticized for the same thing. In 1985, he took President Ronald Reagan, whom he — to the great confusion of the Americans was invited to see the cemetery of SS soldiers. A year later, the Helmut Kohl has again attracted attention when he compared the new Soviet leader Mikhail Gorbachev to Hitler’s propaganda Minister Joseph Goebbels, because they both understood the importance of PR. 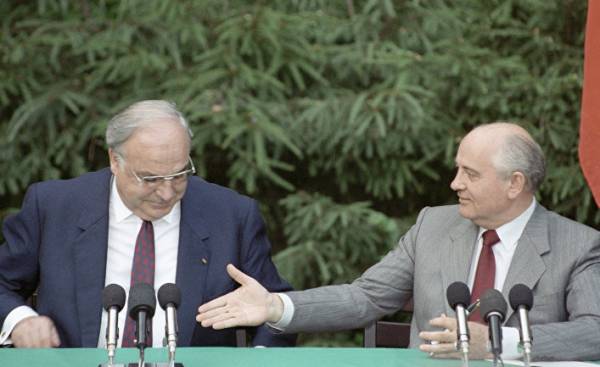 Of humanity Helmut Kohl says a lot the fact that with Gorbachev at his dacha, a modest dacha in the Caucasus, he created his own truly a masterpiece of big politics in the spring of 1990. The big German sat for hours in a knitted sweater and sneakers on a stump by the fire and talked with his Russian interlocutor about family members who both lost in the war. And at the end of the day, Gorbachev agreed that a United Germany can decide which Alliance it to join NATO or the Warsaw Pact. And when they are both on the next day submitted contract in a tuberculosis sanatorium near the garden, Helmut Kohl almost burst from pride, while Gorbachev looked like a man, it is ripe for hospitalization.

Thus Helmut Kohl has made a great contribution to the creation of new, successful and peaceful Europe with Germany in the center. When he along with French President Francois Mitterrand, who feared that a strong Germany with its German brand, which Mitterrand referred to as “the German atomic bomb,” will be too powerful, was common currency, the Euro, the mission of the great German, European to the bone, was completed.

A logical consequence of the life of Helmut Kohl, who grew up in a conservative Catholic family from the Rhineland-Palatinate, which managed to keep its own values in the years of Nazism. Older brother of Helmut Kohl, a teenager was killed in world war II, and he at the age of 14, was drafted into the army in the last weeks of the war, however, participate in the fighting, he did not have.

Opponents, who called it “a Pear”, its underestimated

After the war he entered politics and in 1946 joined the new party, the CDU, and participated in its formation. In 1969, he became head of the government in their own Federal lands, and in 1982 he assumed the position of Chancellor. His huge appetite on the part of the government and hard work ethic helped him stay on top for 16 years. Perhaps also because many of his political opponents underestimated a man whose big head and full physique brought him the nickname “the pear”?

Himself Helmut Kohl, the former is not the greatest intellectual, felt that it put a shortcut of a peasant of the Rhineland-Palatinate, and it made him fight even harder to win.

His colleagues, like George Bush, Sr., did not get tired to emphasize how nice and interesting it was to hold talks with Helmut Kohl, who acquired many friends due to his humor and relaxed manner to behave. Helmut Kohl looked like the epitome of German vitality. But the cosiness of a Teddy bear hiding a cruel bear, who without hesitation released sharp claws, if necessary. Especially for those who, in the opinion of the father of the nation, did not know how much they should be grateful to him. Since the attempted coup in Bremen Since their opponents were cruel and uncompromising.

The man who deservedly is called in Germany “Chancellor of unity” for his great contribution to the fall of the Wall, unfortunately too well able to build walls of intolerance all around.

The battle may have deprived of Helmut Kohl much of the respect that had the right to rely Helmut Kohl, right, anyway, said the chief editor of the Süddeutsche Zeitung, Kurt Kister (Kurt Kister), wrote in comments to the last book of the former Chancellor: “If many were hurt and lost a lot. But no matter what he is fully entitled to more respect — not only from your but also from strangers”.

Respect to a certain extent returned, when the CDU and Angela Merkel tried again to invite Helmut Kohl on the stage and use it as adviser. But disagreement with the course in European policy and the intransigence of the aging giant has hampered cooperation.

In the personal plan of Helmut Kohl, too, was haunted by tragedy after his departure from big politics. In 2001, his wife killed herself and his two sons broke up with his father, one of the sons called it in his book “an egomaniac”. In 2008, he fell at home and had hit her head that since it was hard for him to speak. In his later years, he appeared in public in a wheelchair, and usually spoke for him his second wife Maike Richter (Maike Richter), which was much younger than him.

Helmut Kohl himself said everything I had to say, when in 2011 gave several interviews in which, in particular, walked to the address of Angela Merkel. The bitterness and frustration due to the fact that the current powers that be it was not needed, left. But complaining he still did not want. Because a Teddy bear hearty with iron claws once said, in Germany it’s pretty problems:

“The Germans — what a very unsympathetic world Champions as part of the complaints.”