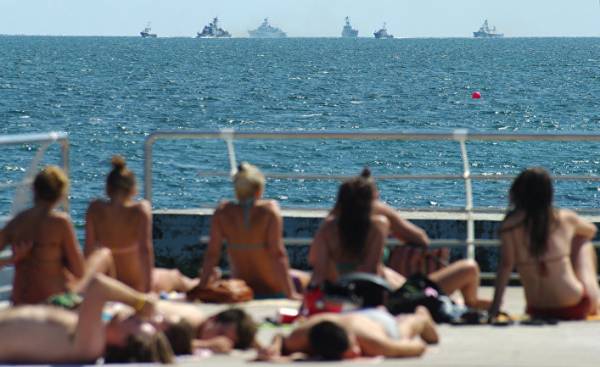 Songs from “Eurovision” to the pigeons of Odessa — a cultural journey through the country, trying not to think about the war.

In truth, I was not too attracted to the idea that I have to spend Saturday night in Ukraine in the atmosphere of “Eurovision”. To endure the speech of Moldova, Sweden, Azerbaijan… Sugary and excessively bright festival — at first glance, that’s not mine. And it’s not talking about the war, the latent conflict in the Crimea, which, as it seemed to me, deserves far more attention than emerged on the scene in Latvian absurdly high boots. But I didn’t realize how much the two are connected, as far as propaganda is evident in the songs that were played live in front of 180 million viewers.

As the organizer of “Eurovision” in 2017, Ukraine have used them (in that it is hardly possible to reproach) in order to improve their image, assumed in the eyes of Europe and even a bit more to distance itself from Russia, which this time even excluded from the competition.

Two steps from Fanconi the capital, which three years ago stood the barricades, we meet with “the fixer” Elena. For it is now much more accustomed to carry journalists to the front line, not in museums. Anyway, she’s trying to show us that her country is actively changing and redefining their identity. The government and the Kyiv authorities have allocated for the event of 22 million euros, a fortune. Thus, they seek to form the image of a modern, open and affordable capital, like Prague or Berlin. That night Kiev is really filled with laughter and singing, creating an atmosphere of fun. Only now in the modern Ukraine to ignore the conflict is simply impossible. 700 kilometers from a social event with his Shine and spotlight still rattle guns.

We approach him in the river (former Dnepropetrovsk), the fourth largest city in Ukraine. Again, we’re not going to the front, Elena offers to go to the war Museum. The fighting was still going (the number of victims has now reached 10 thousand people), and visitors are offered an audio guide. The Windows automatic rifle cartridges side by side with the exploding shells, and in the back of the hall hang the portraits gave their lives for the Motherland soldiers. Under each frame in a small urn are personal belongings of the deceased. Card, chain, mobile phone… 25 years of living in a plastic container. Suddenly Helen gets out of step: she saw on the wall the face of a friend. Last year, three months after their last meeting he had hit a mine. Outside children play in the burnt tower tank. It’s time to go further, on the coast of the Black sea.

The platform is already midnight train, which will take almost 12 hours to get to Odessa. It stops at every station. Five times, ten, fifteen… the way old ladies with work pushing forward the trolley with cheap alcohol. You will need it if you want to sleep. Early in the morning we arrived. Odessa — is an anomaly, a bright spot in the middle of a grey landscape. Linen, and cats in yards. Residents are willing to compare your city with Marseille. Ukrainian free port without a doubt has a Mediterranean spirit and pride of his French counterpart.

The city has consistently rebelled against the Central power: he rebuffed pressure of the tsars and the Communists, and now is not going to give the Kiev oligarchs. Here is preserved the cosmopolitan spirit of its European founders. Our translator, Nicholas noticeably stumbles. He says he now rarely accompanies the French. Until 2012 at the port came many ships. If you believe Nicholas, from April to November, they used one hundred and fifty. And this year only five. Only a handful of foreigners come to enjoy the view of azure city from the Potemkin stairs.

The fact that the travel agencies don’t like war. Even the distant firing scares tourists. However, all here wish they were back. Take this wonderful old guy who stands at the fountain in front of the Opera house and invites all who wish to take a photo with his pigeons. Birds of the world bring him a little of 10 hryvnia for the. This is not enough for the cells. So he had to cut the wings of your pigeons.