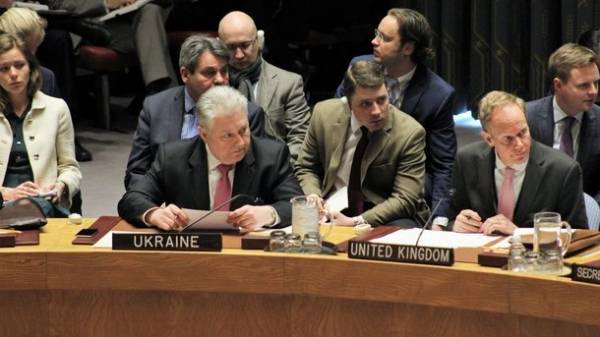 The UN peacekeeping mission in the case of the introduction in the Donbass should be located on the Russian-Ukrainian border and the participation of representatives of Russia excluded. This was stated by the permanent representative of Ukraine to the United Nations Volodymyr Yelchenko, the TV channel “112 Ukraine”.

According to Yelchenko, the Ukrainian side in the final draft resolution on sending peacekeepers to the Donbass expects that the UN peacekeepers will be present in all areas in the conflict zone, including the border, and of crucial importance is the withdrawal of Russian troops from ORDO before deployment.

“The financing of the mission would come from the UN peacekeeping budget. There is a regular budget and a peacekeeping operations. I’ve heard estimates that it will be at least $ 1 billion. in a year, but I’m not an expert. Necessarily in this mission would have indicated that she will be on the whole territory of Donbass, in the first place on the Russian-Ukrainian state border. Another issue of principle for us, this is the conclusion to the deployment of the UN mission of all foreign troops, and they’re alone – RF”, – said the diplomat.

In addition, Ukraine expects that the peacekeepers will be assigned more functions than the security of the OSCE observers. Ukrainian Ambassador also emphasized that among the “blue helmets” should not be Russian peacekeepers

“A country that is a party to the conflict, Russia, at the same time to be a peacemaker. This may not be the only security of the OSCE observers. This is easier for them to arm and not to get there even some military forces of the UN, which will be to protect them. We do not agree that we have to coordinate this with the representatives ORDO as a party to the conflict is Russia,” – said Yelchenko.

He also did not rule out the filing of Ukraine’s own alternative resolution on the peacekeeping mission.

“We’ve got it all accumulated. It is in the hands of our partners. We’ll see in a few days, if necessary, we will submit and distribute your alternative. Another option is to operate on the basis of the Russian project. This does not mean that there is everything to stay the way they were written”, – concluded the Ukrainian Ambassador.

The diplomat noted that Russia had repeatedly on the sidelines of the UN security Council prevented the introduction of a resolution on a peacekeeping mission in Eastern Ukraine, threatening a veto.

“Constantly the Russian Federation supplied us or other signals, it will block any attempt to translate everything in the official paper and to adopt a resolution of the UN security Council, has threatened its veto. That’s why we don’t have anywhere to move in this matter,” reminded Yelchenko .

We will remind, earlier it became known that the Russian Federation has sent to the UN Security Council a draft resolution on the deployment of peacekeepers on the demarcation line in the occupied Donbas.