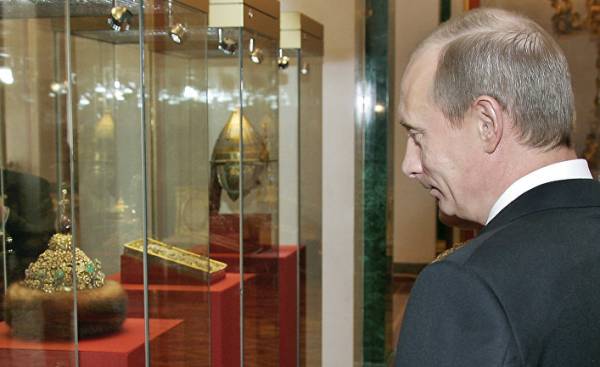 Armed workers and soldiers in Petrograd in February 1917. Today marks exactly one hundred years since the beginning of the events in Petrograd — later called the February revolution, which forced Tsar Nicholas II to abdicate the throne and laid the Foundation for the experiment with communism lasted 74 years.

Current Russian leader Vladimir Putin would very much like to be seen as the heir to the might and glory of the heyday of the Romanov dynasty, deposed from the throne in 1917. But Putin-led system in form and content is most likely the successor to Soviet communism, rather than a successor of tsarist traditions.

It is because of such duality of the Kremlin ideologists found themselves in an awkward situation: as mark said Edel (Mark Edele), the Kremlin is now “can neither fully accept nor fully reject the” tumultuous events of 1917.

It is obvious that Putin simultaneously experiences both sympathy and antipathy towards Bolshevism. On the one hand, he stated that he is not a big fan of Lenin and his followers. He called the Bolsheviks traitors, undermining Russia’s efforts on the fronts of the First world war, with the result that Russia “has lost the losing side.” He also criticized domestic and economic policies of the Bolsheviks, and described a national policy of Lenin as a time bomb that exploded in 1991, which led to the collapse of the Soviet Union.

At the same time, Putin noted that he “liked and still like the Communist and socialist ideals”. What’s more, it boasts a membership in the Communist party and 20 years of experience in the KGB — the Agency which, as he once apparently, proudly said, is “the successor of the Cheka,” and “the armed unit of the party.”

Contrasting views of Putin were not only due to cognitive dissonance. The duality of the position of the Kremlin concerning the revolutions of 1917 is a consequence of the fact that Russia has not yet decided on its post-Soviet identity.

From the point of view of cultural identity, Putin’s Russia is eager to reestablish contact with the lost world of the Romanov dynasty. The Russian Orthodox Church canonized Nicholas II, canonized, and Putin suits the lush and pompous ceremonies, in a clear attempt to imitate the splendor of the tsarist era. But can not escape from the fact that the modern Russian Federation is the direct successor of the Soviet regime. The reality is that adopted by the Bolsheviks on 22 November 1917 the decree on the abolition of all the laws of the Russian Empire remains in force. This decree struck a centuries-old tradition of legal memory States.

The strength of the Soviet legacy emphasizes how post-Soviet Russia has solved the issue of private property. Economic relations in modern Russia based on adopted after the collapse of the USSR the decision to recognize the legitimacy of the Soviet notions of ownership, i.e. the land, buildings and enterprises owned by the state and not individual people. Then it was easy to privatize “public” property like she would not previously owned. In the framework held in 1990-e years of privatisation were ignored the rights of the owners of the tsarist era, who lost their property due to the tyranny of the Bolsheviks.

The consequences of the decision not to return or compensate for “nationalized” by the Bolsheviks property continue to be felt in Russia to this day, because it is contributing to a climate of lawlessness and insecurity of property rights. To build a dynamic economy will fail, if not to ensure the inviolability of property and the uniform application of legislation concerning property rights.

Although the Putin administration from time to time expressed criticism of past actions of the totalitarian Communist period in Russia’s history had not yet been given full moral and historical assessment. Russia has not renounced the many crimes of the Communist regime and did not condemn them, whereupon there was no acts of national redemption. There is even reason to believe that the process of moral revival of the Russian nation has not yet begun.

Such was the opinion of Alexander Yakovlev, one of the “architects” of perestroika, the reform movement of the late 1980-ies that aim to improve the efficiency of the Soviet interpretation of communism, but initiated the collapse of the system. Shortly before his death in 2005, Yakovlev gave an interview to Jonathan Brent (Jonathan Brent), the initiator of the series “the Chronicles of communism”, who was then the post of chief editor of Yale University Press.

“During the conversation, — I wrote to Brent in his published in 2008 the book “In the archives of Stalin”, — Yakovlev always returned to the fact that Russia was not fully deliverydiovan. Wasn’t the Nuremberg trials, General stocktaking, reconciliation between victims and offenders, return of property or provide compensation for many millions of people whose lives have been irreparably broken [Lenin and] the Stalinist “utopia””.

“Instead, the country gradually sank into… indifference and oblivion, and didn’t know if she wants freedom, and almost forgot what freedom is,” added Brent.

The duality of the position of the Russian leadership regarding the revolutions of 1917 is also a side result of his inability to articulate an inspiring vision of the future. What is the social ideal of modern Russia? In what direction the country is moving? Some layers of the Russian political elite position themselves as supporters of conservative ideas. But one of the key pillars of conservatism is respect for the institutions. Others claim that they are advocates of the political system, headed by a wise and powerful “national leader”. But the ideology, which is based on a charismatic leader, requires big ideas and vision.

Meanwhile, post-Soviet Russia is not a country where particularly respect the institutions, or the generator of great ideas. Being unable to develop an attractive vision of the future of Russia, the government is concerned for the most part only the preservation of their own power.

As a result, Russia’s claim to great power status, as well as prioritization by the Kremlin’s centralization of power and stability in the country over all other matters are based on an eclectic historical Foundation, consisting of disparate elements of the Soviet and tsarist past.