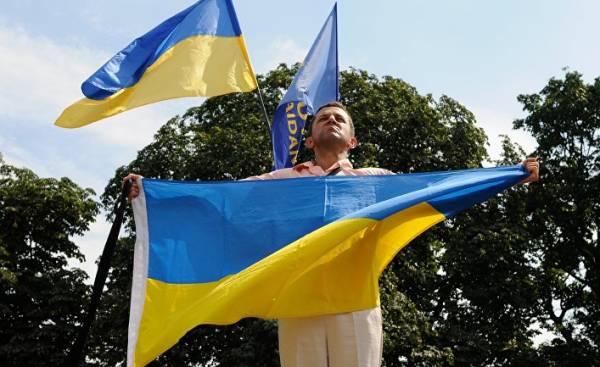 In Ukraine is in full swing to sweep the masterminds and supporters of the “Russian world”. At least warn about it security forces. The last high-profile arrest occurred in Melitopol, where law enforcement arrested 25 people suspected of destabilizing the situation in the city. Enough to effectively power struggles with the Pro-Russian underground, and what can be useful for Ukraine, the international experience of combating the state traitors, understood the “Apostrophe”.

According to interior Minister Arsen Avakov, Melitopol criminal group first came up back in March, when the city began mass burning of pharmacies, market stalls and even buildings of the city Council. A series of crimes were designed to sow panic in the city and to convince the citizens that the government does not control the situation in the region. Simultaneously with rampant crime, there is a “throw-in into society “Russian world” will bring “stability”, the Minister said.

However, the destabilization of Ukraine is a purely criminal methods — the most visible and direct tool used by the Kremlin at the primary level of anti-Ukrainian activities. According to the coordinator of “Information resistance” Yuri Karina, much more effective it may be public information Arsenal of tools employed by Moscow against Ukraine.

“Russia has shifted its focus, and instead of the military component of it relies on the hybrid component, that is, the loosening of the situation inside the country — explains, “Apostrophe” Karin. Scripts mass, for example, a special operation of the Kremlin to create pictures about the oppression of small Nations in Ukraine. But much also depends on the driving force, which will be done in the rate. After all, there is a big difference between arrests of criminals in Melitopol, for example, all-Ukrainian religious procession of one of the Church structures, tied to the aggressor. Important role here plays the information cheat, and a pump society”.

One of these driving forces, which was not widely deployed on the territory of Ukraine, could become the so-called “Bessarabian people’s Republic”. Its creation was actively planned in Odessa, but in April 2015, the SBU conducted a series of arrests of Pro-Russian activists in the region, burying dreams of the formation of the separatist enclave.

Criminal and public information level of the Pro-Russian underground, Ukrainian intelligence agencies are still able to keep under control, but according to the former head of the foreign intelligence Service of Ukraine, army General Mykola Malomuzh, but this victorious war of national intelligence turns out well only due to the fact that the enemy is bad at disguises. “The forces that do not hide themselves and Express their position regarding the formation of support of the Russian Federation, the security services react more or less quickly. But such a force is very small, but in deep development, which should be conducted by individual organizers, we have very few results,” says “Apostrophe” Malomuzh.

The General noted that the underlying risks include business interests tied to Russia. “For example, the financing of specific projects in the Verkhovna Rada, because directly is smuggling between Russia and Ukraine. We have unofficial information that even our components for Russian weapons come from Ukraine smuggling through third countries. Involving someone millions of people will focus on Russia, not only in business, but also to contribute politically. Intelligence agencies this, as a rule, I know, but these things are protected at a very high level in the country’s leadership: the President and the government”, — summed up Mykola Malomuzh.

“A number of influential personalities in Ukraine, which are potential traitors, and then become open enemies, — rolls. If today was the day X, everything would have been shocked just as shocked were the situation in Crimea, adds: “Apostrophe” former Deputy head of the SBU Alexander Skipalsky. — We like the Communist party banned, but I’m sure that the Russian Communist centre in Ukraine has the safe structure and personalities. Leaders and managers disguised anti-Ukrainian organizations feel at ease, and by the state law enforcement system and no restrictions are there for them, and their corrupt connections give them the opportunity to communicate with the enemy and check their actions.”

The multilevel nature of the Pro-Russian underground dictates Ukraine integrated methods to combat them. So, keep the hybrid aggression on the criminal level, according to the former head of the National Central Bureau of Interpol in Ukraine Kirill Kulikov, obliged the interior Ministry.

“To detain criminal elements — is the immediate work of the police. However, we have it turns out that almost all crimes — the handiwork of Pro-Russian underground,” says “Apostrophe” waders.

Public-informational level to work to connect the Ukrainian intelligence services. “In Israel, for example, used the combined funds of the struggle, explains “Apostrophe” former Israeli soldier, military instructor Tzvi Arieli. — First of all, running counter-intelligence “Shabak”. It’s a lot of wiretapping, a lot of paid Arab agents. Monitored and everyone who has something against terrorists. Moreover, there is a huge amount of technical means, the same drones”.

About the need for better supervision and monitoring by the security services and says Oleksandr Skipalsky.

“All the enemies that have even the slightest signs of anti-Ukrainian activities are the subjects of secret monitoring by our law enforcement system, and, first and foremost, the SBU. But instead, there is demagoguery about democracy. Nobody talks about human rights, but is a function of intelligence agencies is to identify enemies by behavior, signs, statements, relations, and they must be regular customers of intelligence. And we have is a substitution of concepts”, — summarized ex-the Deputy head of the SBU.

But to fight the Pro-Russian underground on the political level should the citizens of Ukraine.

“The biggest problem in Ukraine is that there are some supporters of the “Russian world”. In any state there is a fifth column of so-called. Another problem, explains Zvi Ariel. — “Mossad” — one of the few intelligence agencies in the world. There are about a thousand people. But why is it so effective? The fact that so many Jews around the world, citizens of other States on a Pro Bono basis to help the Jewish state. They can be patriots of their country and patriots of Israel, even if he was not there even once. In Ukraine the situation is reversed: people live in this country and absolutely do not feel themselves to be Ukrainians. If tomorrow on the background of dissatisfaction with the President and the current government will come a new party and promise the dollar to 8 UAH to increase pensions twice, but will be sponsored by the Russian side or have some kind of agreement with Russia, then people will vote for it”.