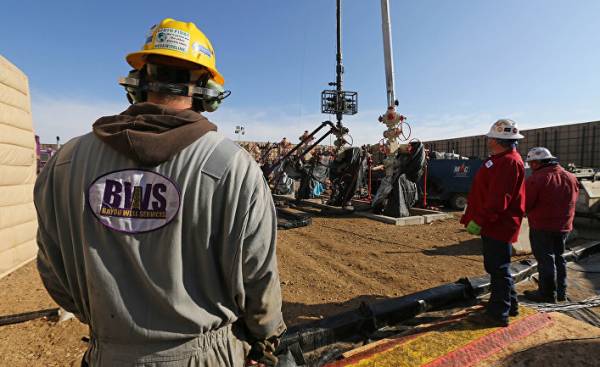 The paradox in energy markets: despite the low prices, the Americans commissioned, one oil rig after another and provoke the oil cartel OPEC, producing a kind of cleansing the market.

The best cure for low prices is low prices. In this case, the market is self-cleaning. This is one of the main market rules. If prices for a particular product remain low, sellers are leaving the market. And if supply is reduced, prices are rising again automatically.

But nowadays this automatism does not work in energy markets. Although oil prices fell significantly below $ 50 U.S. oil companies are constantly increasing power. Last week the company’s production of shale oil has put into operation two towers.

The number of so-called active installations increased to 765, and is high from April 2015. From may 2016, the number has more than doubled (from 316). This is remarkable, because the price of oil has not changed significantly.

Too much investment in the oil industry

In this important two aspects. On the one hand, energy companies hope that the global demand for oil will once again increase significantly. Given the simultaneous economic recovery, this assumption does not seem too bold. On the other hand, mining companies have significantly reduced their costs. For companies mining pays off at low oil prices. Especially for those who bet on shale oil. The process involves the extraction of raw materials from the rocks, and the technology is constantly improving.

“While it is impossible to say exactly what the price will balance supply and demand, writes Jeffrey Currie (Jeffrey Currie), analyst at Goldman Sachs. — The oil shale industry is constantly evolving, it is responsible for a new world order in the oil sector”. In his opinion, the industry has too many investments aimed at the installation, making the production more efficient and at the same time prevent bankruptcies. He believes that oil prices may even fall below $ 40 per barrel before the market clears. Currently, Brent oil traded at 48,91 US $ us WTI — below $ 47.

It is provocation in respect of the OPEC oil cartel. At the end of may, the member countries agreed on the extension of the production cutbacks and attracted to the process of Russia’s largest oil producing country in the world. The goal was to reduce the glut in the market. Now it turns out that agreement is clearly not enough. It seems that billions of dollars has helped the American oil shale industry to break the power of the cartel and carry out the cleaning market is a very different kind.