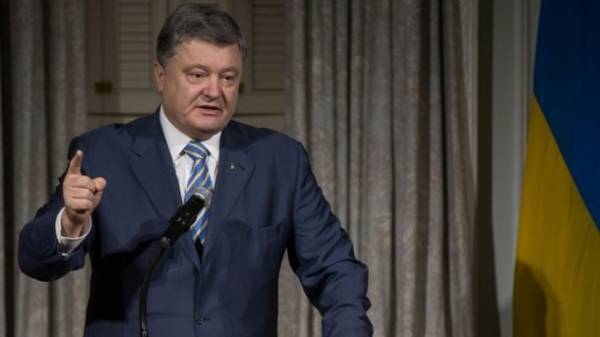 At the meetings in Washington discussed the purchase of American coal to replace coal, the supply of which has been suspended from the occupied territories in connection with the confiscation of the Russian Federation of Ukrainian coal mines. About this at the briefing near the Congress said the President of Ukraine Petro Poroshenko.

“Separately, we had to discuss the issue of energy cooperation and energy security. And he was raised not only during a meeting with energy Minister Perry. The issue of energy security of our state, the question of the purchase of American coal to replace coal, the supply of which has been suspended from the occupied territories in connection with the confiscation of the Russian Federation of Ukrainian coal mines. We agreed to intensify cooperation in this direction as well as in nuclear energy, construction plant and storage of nuclear waste, to remove the dependence on Russia. And separately spoke with a number of questions that will help to improve the investment climate and increase the presence of American investors in the Ukrainian market”, – said Poroshenko.

Also, according to him, during the negotiations in the Ministry of defense, at the Pentagon with Secretary of defense by General Mattis, during talks with Vice-President it was agreed that in the nearest future Ukraine will be visited by several key members of the new presidential Administration, several Ministers.

“Are signed very important agreements, including agreements on defense cooperation, including an agreement on defence procurement and the agreement on military-technical cooperation. Rex Tillerson we also will soon face Ukraine in Kiev, and also planned a number of steps to strengthen our cooperation”, – said the President of Ukraine.

“Where was adopted during the stay of our delegation strategy of World Bank for Ukraine, and also on financing of expert support for our reforms, including those that directly is in a direct competence of the government. I can say that to date the main conclusion, the main result of our trip – Ukraine unites US. If earlier we spoke only about bilateral support in Congress and the Senate, today, we can safely mark this side of the US Executive and a new presidential Administration,” concluded the President of Ukraine.