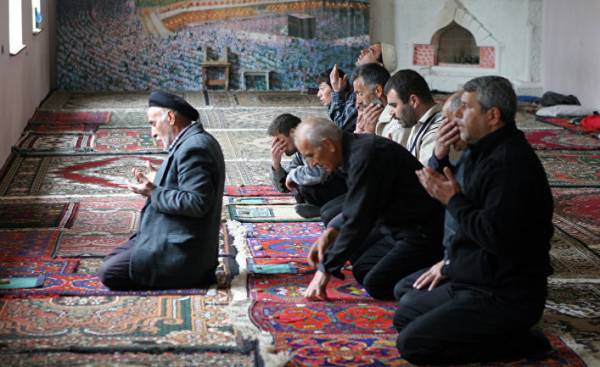 Hundreds of Islamists from the Russian Republic of Dagestan are going to Syria to fight on the side of ISIS. Instead of prevention, the authorities respond with repression and promote a dangerous spiral.

Shortly before Friday prayers in the square in front of the mosque on the outskirts of Makhachkala, is suddenly flooded. Cars are parked in several rows, expensive SUVs near humble “Frets”. The bearded guard in black sunglasses masterfully directs the drivers and shows them where there are still free Parking places.

Dozens of men greet each other and present together in a mosque, a minaret which is still not completed. Appears dressed in black man with long gray beard, followed by young men with short haircuts and beards, they wear the colored sports shirts.

A half-hour sermon is devoted to the proper behavior in the fasting month of Ramadan, which will last until the end of June. The Imam in Russian explains the rules in great detail. Asthma can be the use of aerosols. Travelers may break the fast, and for children it is also optional. Teeth can be cleaned, if not to swallow toothpaste. Sexual relations are forbidden, but the husband is allowed to kiss his wife if he will be able to control yourself.

Near the mosque are several police cars. On the next street also expect the police. Near them are men in suits, some talking on the phone, others talking with the police, it’s probably intelligence officers in plain clothes. Suddenly, as if by an invisible signal, they run to the mosque, heard the warning shots into the air. What looks like a special operation on the street of General Omarova, every Friday.

After prayers every week the police arrest a few dozen men, they are taken to the police station to take their DNA samples. This happens not only here but also near other mosques, which are attended mostly Salafis. Because of the authorities, they are under suspicion.

Dagestan, the Russian Republic with about three million inhabitants, has for many years been a hot spot of the North Caucasus. It was here that armed conflict between the terrorist underground and the police bring most of the victims. According to the independent website Caucasian Knot, which maintains these statistics for several years, the maximum number of victims in Dagestan has a population of 413 people in 2011. Last year 140. However, the relative calm is deceptive.

The conflict was not resolved, but merely postponed. Two years ago, the terrorists of the North Caucasus swore allegiance to the so-called Islamic state (a terrorist organization banned in Russia — approx. ed.). Many jihadists from the region went to Syria and Iraq. In February the Minister of internal Affairs of Dagestan declared that the ISIS is currently fighting more than 1,2 thousand persons from the Republic.

The fact that the inhabitants of the Muslim republics of the North Caucasus join terrorist groups is a serious problem. However, in the fight against the radicalization of the authorities traditionally rely on repression and violence. Human rights and the law does no longer play any role. Torture and kidnapping of suspects is a common practice for the police. But such cruelty only leads to anger, and often it contributes to radicalization and violence.

“What are they thinking in Moscow? They are doing everything to turn people against themselves” — outraged elderly man near the mosque after a police RAID. He has a long gray beard, black pants slightly rolled up. For this reason, he was repeatedly detained on the street and taken to the police station. “You look like those that go to Syria,” he told police. “And you look like those that take bribes,” said the old man. The young man beside him recognized that vows his beard shorter so as not to look “a potential terrorist”.

According to estimates by the human rights organization “memorial”, last year in the so-called list of preventive accounting of at least 15 thousand people were made as extremists. How much really is unknown, as the police recently denies the existence of such a list. But it is real, and people whose name got, have serious problems. They are regularly visited by the police, they often lose their jobs. On the road they are stopped by the traffic police, detained for hours and forced to write explanations, for what purpose and where they go.

With reasonable prevention there is little in common. In order to be in this list, enough to wear a long beard or have a fleeting contact with those who are considered extremist. “This list is not only the Salafis can get there, anyone, just confirm the statistics, — says Oleg Orlov, head of the legal center “Memorial”. This is just silly. Thousands of people feel backed into a corner. The real extremists sit in the centre to combat extremism.”

And then there are people like Mahat of Mamathanov, who did much to keep people from Jihad, but has also been found in the list of extremists. Mamathanov, energetic man with a round face and a short beard, smiling and talks a lot. He constantly shows pictures on your phone: it’s in the journey during the Hajj, the Islamic pilgrimage to Mecca, at the opening of the Grand mosque in Moscow, which was attended by Putin, conferences and seminars.

He is the Imam of the Central mosque of the village of Kostek. The mosque was built by Hungarian architect in tsarist times. In the Soviet Union there was organized a club, and Mamathanov recalls how he as a child I watched this mosque Indian films. After the collapse of the Soviet Union’s interest in all religions, it was Islam in particular. Mamathanov studied in Egypt and Medina, and in 2005 returned to Dagestan.

Due to its Muslim education, he became a respected man with many contacts. When he returned home, the authorities tried to settle the conflict between Sufis — followers of the mystical movement of Islam, which was widespread in Dagestan and the Salafists. From the point of view of many Salafis, Sufis, the adherents of polytheism. And close to the authorities a high-ranking Sufi clergy said that the Salafis are the same as ISIS. But among Salafis in Dagestan there are several groups: some categorically reject violence, others their views reminiscent of the “Muslim brotherhood” (a terrorist organization banned in Russia — approx. ed.), there are those who are willing to use violence.

Mamathanov — Salafi, but contact with the Sufis and does not condemn them. “In my mosque, Sufis and Salafis pray together,” he says. The violence and terror he rejects. If he notices that one of his ward to take the path of Jihad, he tries to dissuade him. He knows that often lead to radicalization absolutely personal reasons.

So, in 2010 to it from the village came a young man, who almost never prayed. He was expelled from the University in St. Petersburg. Not to tell his father, he decided to go into the forest and join the local terrorist cell. “He was ready to die, so no one would know that he left University, says Mamathanov. — Then I was able to convince him”. But two years ago the same man with his wife and two children went to Syria to live in the “Islamic state” and was killed there.

In other cases, the Imam was able to convince people or to warn their relatives. During this three years ago Dagestani jihadists he made his name in the list of sentenced to death. On the Internet on the Russian portals that promote ISIS, reiterates Salafist imams which of Mamathanov, keep people from following the path of Jihad, are the worst enemies of God. After all, they enjoy the confidence of Muslims and are using it to distract them from Holy war.

That is why people like Mamathanov can help the authorities, and this is what the Imam of Kostecka. That’s why he was surprised when he was detained by police and questioned whether he was a Wahhabi, a follower especially of Orthodox Islam. The reason given was the presence of his name in the database. The house followed calls from the police.

Mamathanov decided to go to court and won. The judge ruled that there is no reason to classify the Imam as a potential terrorist. Despite the court’s decision, he sees as a threat both from the radicals and from the security authorities. “Both parties can expect anything”, says Mamathanov.

In prevention it is important that the message against terror came from someone young people from risk groups trust, emphasizes Catherine sokyryany from the NGO international crisis group (International Crisis Group). But the authorities in the North Caucasus lacks the will to talk openly about the causes of radicalization. Because then you have to mention the problems: corruption, arbitrary powers, inequality and poverty in the region.

Tulle Ubidata, member of the working group of the antiterrorist Committee, said how the government understands prevention activities in Dagestan: “Patriotic education, visits to military museums, meeting with security personnel, who by their example would inspire the youth for a peaceful life.”

She can’t say anything about the list of preventive accounting and how cost thousands, as people, are not within its competence. A lack of trust? This problem does not exist, says Ubidata: “People trust the authorities”.