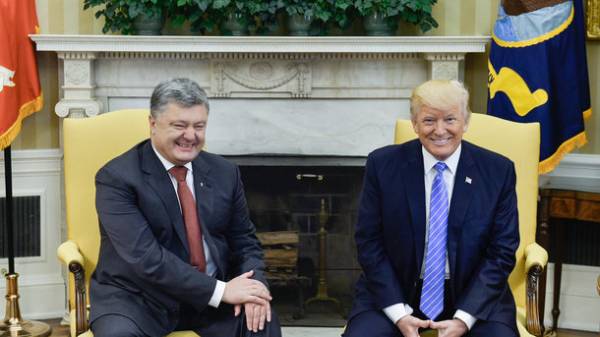 Kiev is ahead of Moscow: Petr Poroshenko met with Donald trump before it managed to make Vladimir Putin. The talks between the leaders of Ukraine and the USA took place in a wide circle in the White house and lasted about an hour. Trump, according to Poroshenko, expressed support to Ukraine in fight against Russian aggression and confirmed that the United States will continue its sanctions policy against the Kremlin. Meeting of the presidents, as Ambassador of Ukraine to the United States Valeriy Chaly, put the point in the formation of American policy towards Ukraine. At the same time the talks were held against the backdrop of numerous controversial publications in the American media about the new rapprochement of the USA with Russia, and the failure of Donald trump from the official statements by Russian aggression in Ukraine following the meeting with Poroshenko. The US President has not really made such statements, but said that Poroshenko was “a very good discussion, and significant progress has been made”. Now, as they say, watch the hands, namely – US policy towards Russia.

Train Clinton and the victory of the Ukrainian diplomacy. For anybody not a secret that at the stage of the presidential race in the USA, the Ukraine relied on the candidate,”Democrat”, Hillary Clinton. Our diplomacy actively established relations with its staff, while ignoring the Republican candidate Donald trump. His victory became a cold shower, because building relationships with the President, who made a Frank lunges toward Russia and ambiguous statements on the Crimea, it seemed an impossible task.

To achieve the meeting of Petro Poroshenko with Donald trump of the Ukrainian diplomacy began even before the inauguration of the newly elected President of the United States. At the end of January came the first reports that the talks between the leaders of Ukraine and the United States could be held in February. But the information is not confirmed by the American side. Later in the AP, even unofficially didn’t want to tell, how is the organization of the meeting of the two leaders, is constantly limited to a phrase: “We’re working on it …”. And so exactly a week ago, sources “” in the Ukrainian dipkrugah confirmed that on 19-20 June the scheduled two-day visit of the Ukrainian President to Washington, where will be held the first meeting of the leaders of the USA and Ukraine.

Just a couple of hours before the start of yesterday’s talks Poroshenko with trump in the oval office, The Guardian revealed details of the organization of the summit. According to the publication, the main condition was the refusal of the US President from the official statements by Russian aggression in Ukraine. “The meeting format does not provide for statements of the leaders on the bilateral relations. Otherwise Trump would have to personally outline the position regarding the Russian military invasion of Ukraine and annexation of Crimea in 2014, which the President of the United States still avoided relegate the subject to a state and defense Department,” said The Guardian.

The format of the meeting Petro Poroshenko with Donald trump was not very familiar to the standard of the talks between the two leaders. For example, the meeting of Ukrainian President with the trump predecessor of Barack Obama was held to the standard that included closed “dual play” and Protocol. Yesterday’s negotiations of presidents of Ukraine and the USA held in the extended format: first Poroshenko met with Vice-President Mike Pence, then together they “looked” to the Trump and his Advisor on national security Herbert McMaster (it is so stated in the agenda of the US President on June 20). Also in the extended format was attended by the Ambassador of Ukraine to the United States Valeriy Chaly and Minister of foreign Affairs of Ukraine Pavlo Klimkin and Ambassador of the USA in Ukraine Marie Yovanovitch.

The Western media dubbed the meeting a “working” and noticed that trump took Poroshenko without special honors. So on Monday, the U.S. President met with President of Panama Juan Carlos Varela. Trump and first lady Melania took him into the South wing of the White house and took a long walk with him in the colonnade, then was the “dual play” in the oval office. When visiting the United States was Romania’s President Klaus Iohannis, at the end along with trump, they gave a joint press conference.

Trump said that the meeting with Poroshenko for him – “a great honour”.

“The country on everyone’s lips. We are not indifferent to its fate. Mr Poroshenko and we had very good discussions. And I think we’ve made progress,” said trump.

But he’s not really said about the Russian aggression in Ukraine. This was already after the talks at a briefing at the White house said Poroshenko himself, trump to the press did not. “Took a full, very detailed meeting with the President of the United States Donald trump. We received strong support from the US, support for the sovereignty, territorial integrity and independence of our country. And strong support for the continuation of reforms in Ukraine. It was emphasized that the USA support and remain loyal to the Minsk agreements” – said Poroshenko.

According to the Vice-speaker of the Verkhovna Rada Irina Gerashchenko, who was part of the Ukrainian delegation in Washington, it is very important that the meeting of the presidents of the United States and Ukraine was held on the eve of the G20 summit in Hamburg, which will host the first meeting of Donald trump with Vladimir Putin. And it is very important that the President of Ukraine met with the Vice-President of the United States Mike Pence – responsible in the U.S. for Ukrainian dossier.

As agreed by Poroshenko and the tramp:

New sanctions and the rapprochement between the US and Russia. According to Ukrainian parliamentarians, trump can make history and go for a second term, if you stop military aggression of Russia against Ukraine. And yesterday’s meeting with Petro Poroshenko for trump is a good opportunity to send its critics and opponents on Capitol hill a signal, saying, see, the USA are considered Ukraine and will not go to a rapprochement with Russia. Especially against the backdrop of the ongoing investigation of Russian interference in presidential elections in America.

However, the American media have a different opinion. On the eve of trump’s negotiations with Poroshenko BuzzFeed publicized the details prepared by the Secretary of state Rex Tillerson of a new plan for rapprochement between the US and Russia, which consists of three points. It details the under Secretary for political Affairs Tom Shannon will discuss with Russian colleagues in St. Petersburg on June 23. Also according to BuzzFeed, the USA can return to Russia seized from her in December 2016 diplomatic residence in Maryland and new York in exchange for progress in other issues.

All this is happening against the background of the lack of official strategy of the new American Administration towards Ukraine. According to Valery Chaly, the point in its formation can supply just the yesterday’s meeting of Poroshenko and trump. At the same time, experts note a certain inertia of the Administrations trump in this matter. In fact, in relation to Ukraine, we see the continuation of the policy of the Obama Administration with a few exceptions – the state Department is still not responsible for the Ukrainian dossier official. Assistant Secretary of state for Europe and Eurasia (previously this position was held by Victoria Nuland) and not appointed. According to the American media, this post can be a tough critic of Putin, President of the Center for European policy analysis (CEPA) Uess Mitchell. Although earlier experts have predicted for the position of Executive Director of the McCain Institute, former U.S. Ambassador to NATO, Kurt Volker.

Contrary to expectations and infinite “plums” in the media, the presidents of the United States and Ukraine have not agreed on the accession of States to the negotiation format with Russia, and a new alternative to the Minsk settlement of the situation in the Donbas. Although Rex Tillerson said, “we’re not handcuffed to Minsk” and “Ukraine and Russia can resolve the conflict and through the Minsk process”.

Does the Ukrainian question in the new rapprochement, the US and Russia, is still unknown. But a positive step the visit of Ukrainian delegation headed by Poroshenko in Washington can be called the extension of sanctions against Russian individuals and legal persons, which yesterday announced the U.S. Department of the Treasury. In the “black list” were Deputy Minister of economic development Sergey Nazarov, the firm is personal chef Putin, the security structure of the bike-club “Night wolves” and others.

New sanctions imposed on the background of the unclear situation that has developed around adopted last week by the Senate bill, which significantly expands sanctions against Russia and prohibits Trump to repeal or weaken without the consent of the Congress already existing anti-Russian sanctions imposed over the annexation of Crimea and military aggression in the Donbas. The Republicans in the House of representatives decided to send the bill to the Committee on foreign Affairs to evaluate its content. And if it changes, the project must again be approved by the Senate. Some experts believe that this kind of playing on the nerves of Russia. During the first meeting with Vladimir Putin, Donald trump can make a deal not to impose new sanctions instead of, for example, concessions to Moscow on the Ukrainian question.