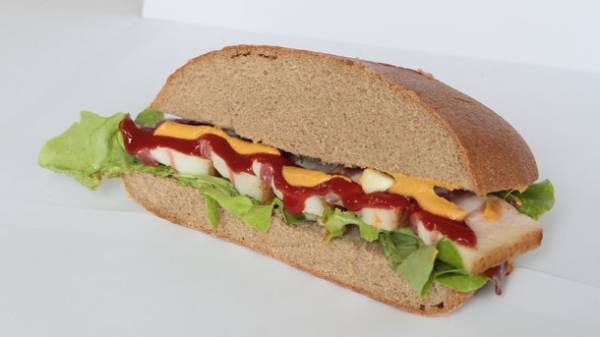 With the onset of autumn the Ukrainians switch from light meals to more nutritious meals. To monitor prices of basic products, the “Today” invented “Salzburger menu” — lunch for four, the basis of which alburger sandwich of black bread with “General” lard with seasonings. Experts of the Ukrainian agrarian Confederation has estimated how much it will cost the family a set and how to change price per year. 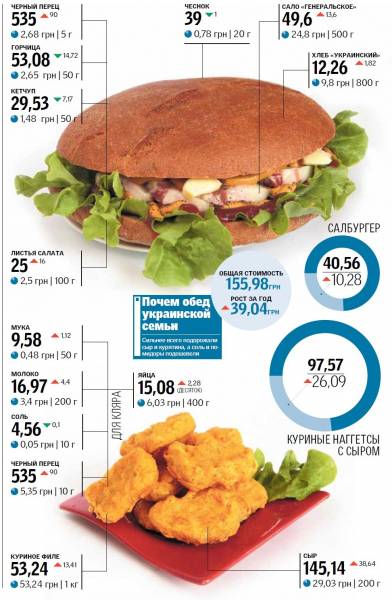 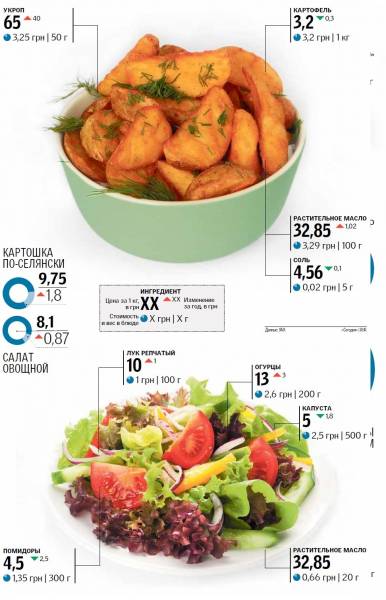 In the index “Salzburger-menu”, developed jointly with experts that included four meals. First Ukrainian sandwich with bacon, where the recipe includes Ukrainian bread, “the General’s” fat, herbs and seasoning. The Burger in Ukrainian today will pull on 40 UAH. Over the years it has risen by more than 10 UAH, basically at the expense of bread and bacon. It accounts for about 60% of the cost of a sandwich. Our menu also includes potato po-selyanski. Despite the fact that a kilogram of potatoes fell by 30 kopecks. total price of meals has risen by almost UAH 2. The main factors was the dill, kilograms which went up by UAH 40, and vegetable oil that added in price slightly more than the hryvnia. Finally, the menu includes vegetable salad and chicken nuggets with cheese. It is worth noting that of all the “Salzburger menu” it is the chicken and cheese went up significantly. Compared to last year the price increased by 13 and 39 UAH/kg, respectively. As a result, the portion of the nuggets for four today will cost UAH 97.

In the price of chicken and bacon

The analyst of the Ukrainian agrarian Confederation Nelia Onishchenko noted that the index of a dining table for the year increased significantly by more than 33%. Such a rapid increase in it links, first and foremost, with rising prices for poultry meat. In comparison to 2016, and chicken nuggets, for example, added to 36.5%. “The most expensive ingredient there is, of course, chicken — it accounts for more than half of the cost of meals. For the last two months of chicken meat increased in price by 17%, — the expert explains. — The prices are rising for several reasons. On the one hand, the more expensive the production (rising feed prices, increased tariffs on electricity, gas) and on the other there is a growing demand for chicken. Many Ukrainians go at it as a cheaper meat.” Another important factor is export. Over the past year, Ukraine is actively increasing its supply of poultry meat abroad — 30%.

Onishchenko said that the “meat factor” played a role in the increase of traditional sandwiches with bacon. During the year the cost of salberger jumped almost 40%. “If in August last year at the ingredients for salzburgerhof had to spend a little more than 30 UAH, now the sum is about UAH 40. Major cost items — bread and lard. And fat accounts for about 60% of the cost of meals”. Because of the difficult situation pork producers for some time, reduced production, many have worked in “almost zero”. Today, according to market participants, the pork consumption exceeds production. That also affects the price.

But the cost of such meals as potatoes selyanski, has not changed. Expert notes: first, the season of potato harvest and it is cheaper, and secondly — for most of the year the price of this product almost does not change. “If we talk about salad “Vegetable”, then, of course, closer to winter the cost will increase. It will not be a big surprise to buyers, as fresh vegetables is a seasonal product and now is the time when vegetables have the lowest price. Such cost, as it is now, will last approximately until the end of September — beginning of October, and will then gradually increase,” — concluded Onishchenko.

Experts in one voice say that the cost of almost all selling items in the fall will grow. Director of the Association of retail suppliers Oleksiy Doroshenko told us that the price of bacon will rise, but not by much. “A year earlier in August, a kilo of bacon cost an average of 36 UAH, and now it is 50 UAH. That is, during this time, the fat increased in price by 38%. In the near future its cost will increase by 2-3 UAH, but a serious rise in price will not” — said Doroshenko. Less optimistic forecast from economist Alexander Okhrimenko. “The fat will rise to 20%. A seasonal pattern: the colder, the more fat,” he told “Today.” Vary from the experts opinions and about the chicken. Doroshenko believes that the chicken will rise in price a few hryvnia to the end of the year due to the lack of competition in the market. Okhrimenko says that the price of chicken will not grow. But only if you do not increase exports. Otherwise, the chicken will still rise by up to 10%. In relation to the price of bread, the experts agree: until the end of the year it will grow to 10%, but not above. If now a kilogram of bread costs about UAH 12, soon its price will rise to 13.2 UAH. “The grain harvest this year is more than sufficient, and therefore a substantial rise in price is not expected”, — says Alexander Okhrimenko.

In addition, according to him, the cheapest in the early fall will cost potatoes. “The cost of potatoes in September may even fall by 10-15%. This is due to the collection and a sufficient harvest. But with the onset of cold weather, the potatoes will start to rise again in price,” — said the expert. With this trend agrees Alex Doroshenko: “Pounds of potatoes last year was worth about UAH 5, and now 7 UAH. Until the end of the year the cost will rise to 20%”. In his opinion, this price increase will also affect other vegetables: cabbage, lettuce, tomatoes, cucumbers and onions. But the price of hard cheeses are not nearly rise — will affect competition with Dutch and Polish producers. But given the small autumn rise in prices of this product in Europe, we have its cost also will rise slightly — from 160 UAH to 170 UAH per kilogram.