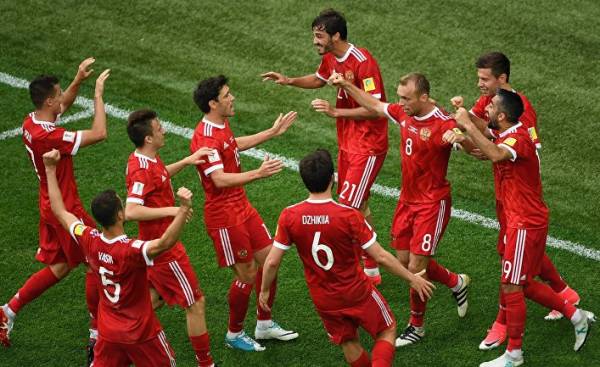 Saint Petersburg, Russia. — If each host country major football tournaments could choose an opponent for the first game, New Zealand would be at the head of the list. Therefore, Russia did not miss the opportunity and start the confederations Cup with a victory against the Champions of Oceania.

In the presence of Vladimir Putin, the Russian team won 2:0 at the stadium on Krestovsky island, the construction of which cost $ 1.4 billion. The game masters were very expressive, and her only negative point is that the Russians did not score six or seven goals. But the massacre of weaklings fraught with one problem, which is that she rarely gives clues for the future, and the coaches do not have the opportunity to assess the progress and success of their players.

But a win is a win, and it was very necessary to Russian national team, which played in front of President Putin, who said this week that the team of Stanislav Cherchesov is necessary to raise the level of play on the eve of the world Cup. But then the Russian will play with the new Zealanders Anthony Hudson (Anthony Hudson), and Portugal and this match is much better clarify the prospects of the Russian national team which will meet with the Portuguese on Wednesday in Moscow.

New Zealand, which occupies the 95th place in the FIFA rankings, had the opportunity to speak at the confederations Cup, defeating Papua New Guinea in last year’s championship of Oceania. If this team wants to return to Russia in 2018 for the world Cup, she will have to beat Solomon Islands in the play-offs in November to take over a South American team, which will be the fifth of his skill (currently, it is Argentina).

New Zealand will need a real sports miracle to break into the world Cup, so Russia without much enthusiasm took the victory over it with the score 2: 0. But in the last 15 games, the Russian has won only three times, and they simply had to win. This team is weakened due to injury, Aslan Dzagoev and Artem Dzyuba, not to mention the departure of Sergei Ignashevich and Vasily Berezutsky. In games against teams of a larger size, the absence of these experienced players surely will have an impact, but still — Russia on Saturday was a good day, and now she has something to build on this success.

Who scored goals from Denis Glushakov and Fedor Smolov made a good impression as the young CSKA player Alexander Golovin, who played in midfield. At the sight of the 33-year-old Yuri Zhirkov, an arrow plate on the left flank for 90 minutes, and graying 32-year-old Alexander Samedov with his unquenchable energy, the whole team, and especially the youth, received an additional charge of vivacity.

Top playing the 3-5-2, and she was not happy teeth weak new Zealand team. And transfer and movement of the hosts on the field certainly aroused admiration even from Putin, who watched the match in the stands, sitting with the President of FIFA, Gianni Infantino, and before gave an inspiring speech.

“When the President comes to speak, it gives benefits, but also imposes additional responsibility — said the coach Cherchesov. But we coped with the task, and now we will play further.”

But endorsed Putin work Cherchesov and his players personally after the game?

“Unfortunately, Putin has gone,” sadly said the coach of the Russian team.

Russia has decided to start the game very active, and she succeeded. In the first ten minutes dangerous shot Golovin, and the goalkeeper had to hit the ball. Then the Snake took the ball in the penalty area and struck past the goalkeeper, so the gate had to save the defender. And Bob struck his head on the post. The style of the game is almost not changed, and Russia has created 17 chances, while scoring only twice.

The coach of the New Zealand Hudson, whose team on Wednesday will meet in Sochi with Mexico, have tried to make this game a little more positive, saying that a fight of this level will benefit the players, who usually play in the qualifying matches against countries such as Tahiti, New Caledonia and Papua New Guinea. 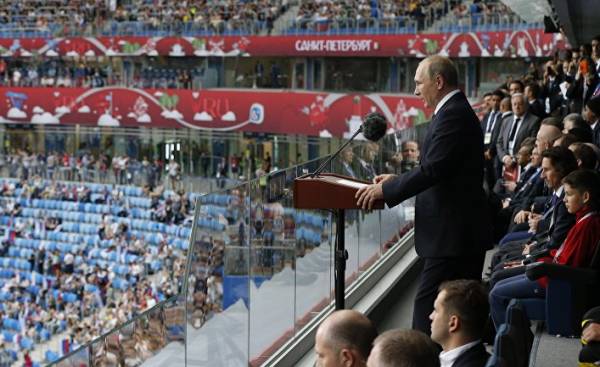 © RIA Novosti, Dmitry Astakhov | go to Photobacterium of the Russian Federation Vladimir Putin speaks at the stadium “Saint Petersburg” before the match of the confederations Cup 2017. 17 Jun 2017

“We need to be very purposeful and tough,’ said Hudson. — We know that this tournament gives us an incredible opportunity… for improvement and to prepare for the qualifying games before the world Cup”.

“We were a little upset, but we played against a very strong Russian team. We rarely have chances to play with the best teams, because we got an incredible feeling and experience. They didn’t stop, acted sharply and quickly. We knew the scenario that was waiting for us”.

For Russia, which in the world ranking is 63rd place between Scotland and Albania, it was an opportunity to lay the Foundation and to ease the pressure, although Cherchesov strongly insisted that the pressure for him and for his team it’s no problem.

“Does this pressure? Pressure is a medical term when measure blood pressure, and I about it hear for the third day. No pressure on us as a team, he said. — The tempo was high, we had a good game and he got what he wanted.”

“It was evident that the people are nervous, but Russia had to win this first match. New Zealand also wanted to win, but we have achieved a very good result. All went well”.

Now Russia will be harder and harder. But if her team will be able to achieve the same result against Cristiano Ronaldo and Portugal in Moscow, it is reason to hope she will be much more. 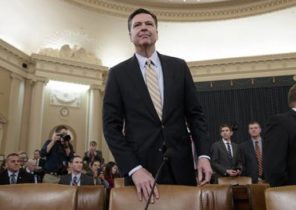 Why is the speech of Komi scared of Russians