Actress and TV presenter Yana Poplavskaya published a post on his page on Facebook, where it is very tough statement about the situation in Ukraine. The Soviet “Red riding Hood” publicly accused the Ukrainians of premeditated murder of peaceful population of Donbass and demanded to remove the representatives of Ukraine with the Russian Federal channels.

The post actress said Russian journalist and blogger Alexander of Tver. “You know that the Russian Federation three years ago violated the territorial integrity of the sovereign state of Ukraine? You know that in Ukraine, on the territory of another state for the third year to kill Ukrainian soldiers Russian lumpen proletariat, together with the armed forces of the Russian Federation? In your value system fits the fact that to violate international laws and attack on other States not? You are a child, what books you read? Or it was limited to little red? You write that you feel sorry for the children, but you lie. You do not care about children, the elderly, people in principle” — he turned to Yana Tver.

Also, the blogger said, “how much pain, grief and tears brought to your Russian the world into the homes of innocent people.” “You do not mind that “DNR” and “LNR” nobody in the world recognized? Not a sneaking doubt that the sanctions imposed on Russia are not so simple? Or the untroubled consciousness of nothing at all and only dollars in front of your eyes? Don’t want Ian to turn his anxious gaze on his impoverished, backward state, which produces nothing, where half the country lives without gas, where 40 million people live below the poverty line, where the pensions of the elderly is equal to the price of your lipstick?” concluded Tver. 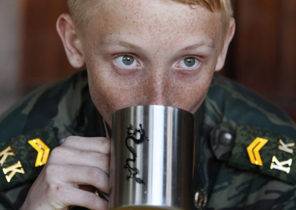 Russia: the club for young spies