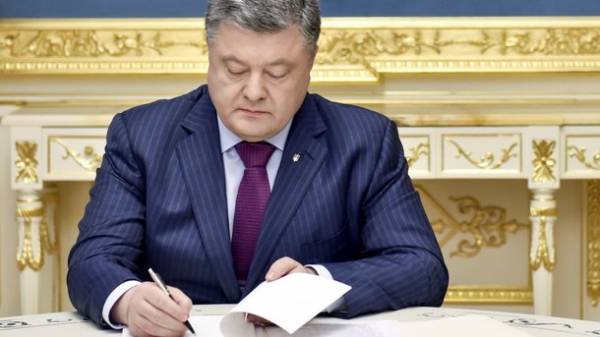 The President of Ukraine Petro Poroshenko has signed the Law “On amendments to the criminal code of Ukraine concerning the rules of addition of punishments and classification of the term of pre-trial detention” No. 2046-VIII. About it reports a press-service of the head of state.

The adoption of the legislative act aimed at improving the state of security and protection of the rights and freedoms of man and citizen, property, public order and public security from criminal attacks.

The law proposes to state in new edition of part five of article 72 “the principle of addition of punishments and classification of the term of pre-trial detention” of the Criminal code of Ukraine, according to which a preliminary opinion will be counted by the court in the sentence in case of conviction to imprisonment day after day or according to the rules specified in part one of this article.

According to the law in sentencing that are not mentioned in the first paragraph of this article, a court considering a preliminary conclusion, may mitigate the punishment or totally release the convicted person from serving it.

The law shall enter into force on the day following the day of its publication.

Recall that this law was adopted by the Verkhovna Rada of Ukraine on 18 may. The document repeals the so-called “Savchenko’s law”, which entered into force on 24 December 2015 and provides that each day of preliminary detention shall be read as a primary punishment.