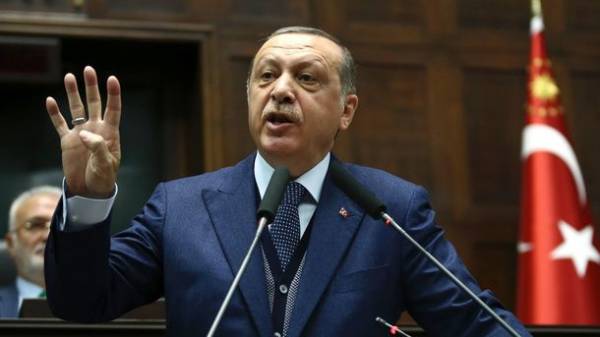 U.S. police on 15 June issued warrants for the arrest of nine guards of the President of Turkey Recep Tayyip Erdogan, who participated in the clashes with demonstrators during a politician’s visit to Washington in mid-may.

Recall, may 16, during Erdogan’s visit to USA and his bodyguards beat up a Kurdish and Armenian protesters near the residence of the Turkish Ambassador. Nine people injured.

Also declared wanted by three officers of the Turkish police, four U.S. citizen of Turkish origin, two of whom were arrested in may, and two Canadians.

The chief of police of Washington Peter Newsam encouraged them to arrive in the US and answer according to the law.

“We have all seen the violence against the protesters. We will not tolerate… They (the guards Erdogan − ed.) should come here in the US, and to respond to the allegations,” said Newsam.

Erdogan reacted strongly to the decision of the law enforcement agencies of the United States, promising to respond to this “political and legal methods.”

“What is that law? If my security will not be able to guard me, why I’m taking her to America?” − said the Turkish leader.

The Ministry of foreign Affairs of Turkey has summoned the US Ambassador in Ankara John bass. He said that the decision of the American authorities, is erroneous, biased and has no legal basis. And the brawl at the residence of the Turkish Ambassador in Washington was the result of the inability of the security staff of the United States to take the necessary measures.

Coalsales informed that the Turkish Ambassador to the US Serdar kılıç, accused Washington of solidarity with the terrorists because of the protests of the representatives of the PKK during the visit of Erdogan.