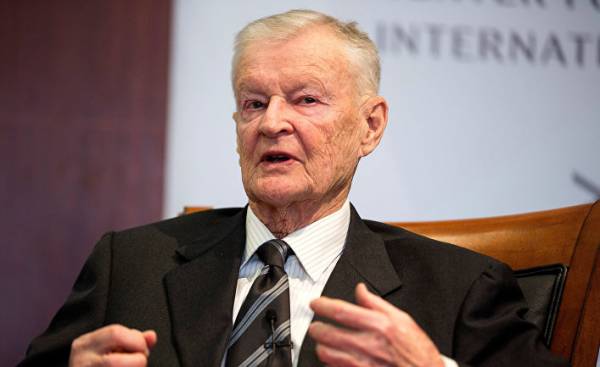 On may 26 2017 from Zbigniew Brzezinski, one of the main strategists of American power. He was born in 1928 in Poland in a Catholic family with noble roots. This diplomat’s son was 11 years old when the Soviet invasion forced him to move to the United States. He became Professor of political science at Harvard, maintained ties with the Democratic party and occupied the chair of the national security adviser to President Jimmy Carter (1977-1981).

It is necessary to clearly imagine the environment in which he worked Brzezinski. From 1969 to 1977, Republicans Nixon and Ford (their adviser was Henry Kissinger) completely departed from the standards in diplomacy. So, Kissinger opposed any support of Soviet dissidents, which could complicate relations with Washington and Moscow. But the Watergate scandal caused the American public rejection of the immorality of the Nixon in both domestic and foreign policy. As a result, in 1977, came to power, Jimmy Carter, a highly respectable man, a deacon of the Baptist Church. His commitment to Christian values led him to appoint a human rights activist Brzezinski to the post of Advisor. He became a symbol of the return of morality in American policy and was based on two main principles: hostility to Moscow and the protection of human rights.

The strategic role of Eurasia

Whatever it was, became Brzezinski and a prominent figure in the intellectual life of America. After the cold war in the discussion of geopolitical issues sounded four main name: Kissinger, Fukuyama, Huntington, and Brzezinski. In his bestselling 1997 “the Grand chessboard” Brzezinski opposed to cold-blooded realism of Kissinger and at the same time denies the theory of Fukuyama about the end of history. In his opinion, the preservation of the Russian threat becomes an obstacle for the story to end. However, the disagreement with the girl fighting doesn’t mean he supports Huntington. If the author of the “Clash of civilizations” called the China and Islam are the main threats to the United States after the collapse of the Soviet Union, Brzezinski was still seen in Moscow, the main risk factor.

In his book, a former adviser to Carter argues that the most important in the strategic plan is the region of Eurasia. It was there where most of the world’s population, industrial capacity and energy resources. He who controls Eurasia, controls the world.

The United States is, unfortunately, not located in Eurasia. They are the first world power because of its dominating influence in a certain part of the continent. If the region has another power, the US will lose hegemony. As Brzezinski writes, “it is vital that the political arena does not have any rival capable of dominating Eurasia and thus challenging America.”

To ensure its dominance, the United States needs to develop a consistent strategic plan, to further remotely control Eurasia. First of all, they need to weaken Russia, which is their real rival. They want to liberate Ukraine from Moscow’s influence: “Without Ukraine, the restoration of the Empire, whether on the basis of the CIS or Eurasia, would be a viable business.” Furthermore, it is to undermine Russian influence in the Caucasus and Central Asia. During the Soviet invasion of Afghanistan, he organized the delivery of weapons to the Mujahideen via the CIA (Reagan continued this strategy).

Further, the United States needs to consider Eurasia as a chessboard, the edges of which they need to keep. The West (Europe) and Eastern (Japan and South Korea) the tip must remain under American control for the encirclement of Russia.

Finally, Washington should be able to make concessions to European allies that they remain under his wing. Therefore, Brzezinski condemned the unilateral approach of George W. Bush, supported the European construction and underlined the need to leave the room for manoeuvre of France, which you can assign the role of gendarme of Africa.

Such an open view of US interests may seem cynical. But it’s not. Inspired messianism, Zbigniew Brzezinski, believed that American hegemony is good news for the whole world, because the United States is the richest, most democratic country in the world, and their power contributes to stability throughout the world.

To Brzezinski also listened to bill Clinton and his Secretary of state Madeleine Albright (she was his student). He advised them to come into conflict with the Serbs, who were considered pawns of Russia in the Balkans. He opposed the war in Iraq and was part of the inner circle of the candidate and then President Obama. At the same time, he strongly criticized Donald trump was called an isolationist and a supporter of Russia. This is evidenced by his tweet from February 9, 2017: “the US still has a foreign policy?”

His ideas were not recognized in scientific circles. Although Brzezinski supported the neo-conservatism as regards the protection of human rights and a tough attitude toward Moscow, he departed from him for in the Middle East. For example, he condemned Israel’s policies against the Palestinians and the role of the Pro-Israel lobby in American diplomacy. Whatever it was, his doctrine had a major impact on the Obama administration’s approach to the Ukrainian question. Brzezinski has consistently insisted on a tough policy of sanctions against Russia after the annexation of Crimea in spring 2014.

However, give a word Brzezinski. In his latest “tweet” from may 4, he wrote: “Light American leadership is a necessary condition for a stable world order. Nevertheless, we increasingly lack such leadership, and the situation in the world does not cease to deteriorate.”