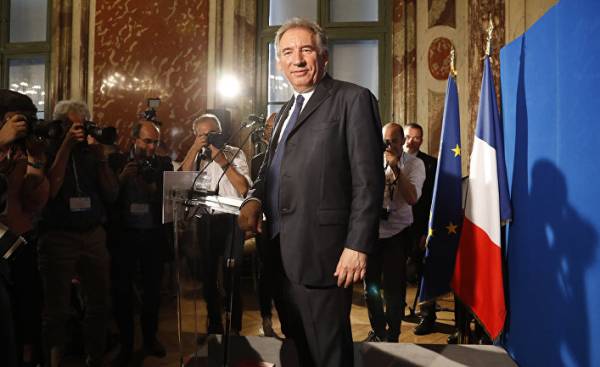 After trying Bayrou to put pressure on Radio France and of the claim of the Minister of labour in connection with the publication of documents on the reform of the labour code, several groups of journalists, including the newspaper L’express, expressed concern about the “extremely troubling”.

The new government’s problems with freedom of the press. 18 may, we expressed concern about the preparation of the President’s trip to Mali, in which the Elysee Palace selected journalists assigned to cover this event. That to impose anything editions, cannot be considered. This was the answer. Anyway, last week is extremely worrying signals received from the two Ministers. This concerns their relationship to the independence of media and protection of sources.

On 7 June, a few hours before France Inter exposing the material of the suspicions about bogus employment of assistants to deputies of the European Democratic movement, party leader and Minister of justice, françois Bayrou (François Bayrou) personally called the head of the investigations unit Radio France with a complaint against overly-invasive methods of work, adding that the lawyers are considering the possibility of qualifying all of this as “harassment”… the question of the journalist the Internet-edition Mediapart he gave this confusing answer: “the call was made not by the Minister of justice and President of the “Democratic movement”, citizen!”

On 9 June the Minister of labour Panico Muriel (Muriel Pénicaud) stated that her Agency will file a lawsuit with the accusation of “theft, disclosure of professional secrecy and concealment” after the publication two days earlier in the newspaper Libération of documents with the indication considered by the Ministry approaches for future labour reforms. Proceedings can affect not only the sources but also the paper itself.

Anyway, the concern is not only these two extremely disturbing developments. May 11, the movement of Emmanuel Macron “Forward!” has filed a lawsuit on specialized information publishing Lettre A for “concealing infringement of the automated data processing”. The reason for this was the appearance of the article, which is based on the content of the leaks MacronLeaks.

On the evening of 11 June, the Minister of unity of territories and the candidate ‘Forward’ in the parliamentary elections of Richard Ferrand (Ferrand Richard) called against him the work of a journalistic investigation about the signing of his wife’s lease contract with the insurance company Les Mutuelles de Bretagne, where he then held the post of Director General.

In relationship with freedom of information, the new government made a bid to attempt to pressure the judicial repression and prosecution. “Continue on and leave us alone, because therein lies freedom” — said Richard Ferrand, may 3 at the House of journalists in Paris on the occasion of world press freedom day. We proceed in this no doubt. Because informing people is equally the duty of that right, and because a free and independent press is essential for democracy.