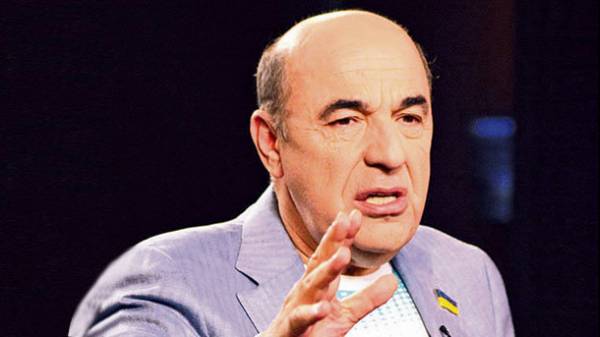 The leader of the party “For life” Vadim Rabinovich announced a termless protest action to dismiss and prosecute the head of the National Bank Valeria Gontareva, and her assistant Catherine Rozhkova. About this Rabinowitz said during the broadcasts of Ukrainian TV channels.

According to Vadim Rabinovich, while the National Bank Gontareva control (which statement of resignation was not accepted) and Rozhkov, any attempt to stabilize the economy of Ukraine in vain.

“If we try to lead our economy to a market economy, make the normal laws, we will still reach our nationwide financial system run Gontareva and Rozhkova. Positive changes in the economy of the country should begin with national Bank. Should come to normal people. But Gontareva and Rozhkova must go!” — said Rabinovich.

The leader of the party “For life” urged all regional organizations of the party to join the protest outside the national Bank, which will be held in the near future in Kyiv and will last as long as Gontareva and Rozhkov will not be prosecuted.

“In the near future at a party meeting, we will address the question of the preparation of the party “For life” to the beginning of an indefinite action from the national Bank and government buildings, which will not end until, until the “vacationer,” the Chairman of the NBU Board finds a replacement. In addition, we demand an objective investigation of what is happening in the national Bank, when the guilty will suffer just punishment,” — said the MP.

“Today, no progress with the issue of the Bank no. Our action “Gontareva and Rozhkov — get out!”, stress will be indefinite, and we stay there until we achieve solutions for Gontareva. I urge all of our regional organizations to join the campaign in Kiev. We will stand up for our rights. We will act peacefully, but we keep pushing them until they realize that people hate them is that the crimes must answer before the law, especially crimes during this difficult time for the country! Without this step, all the talk about fighting corruption.” — Vadym Rabinovich.

“LUSTRATION SHOULD BE SIMPLE — WHO RULED THE COUNTRY FOR 20 YEARS, MUST GO!”

“They propose a very simple lustration. Automatically to avoid the power of those who more than 20 years ruled the country in the presidential Administration, the Cabinet, in the regional administrations. They are for 26 years has done to the country is that we now can’t live. Ukraine was the sixth country in the world in space capabilities, and now to “Pivdenmash” producing pots for three days a week. A third of the country has gone rotten, young professionals do not see prospects at home, the elderly could hardly survive, science has destroyed. Comfortable environment built exclusively for a pack of greedy officials!” — said Rabinovich.

The leader of the party “For life” I am sure that only a new power can radically change the situation.

“Our party proposes to change the corrupt system. To build an independent, non-aligned country. A country with highly developed economy based on agricultural sector, high-tech and banking-type “Switzerland of Eastern Europe”. We offer a different future for our children and our country,” — says the MP.

In addition, Vadim Rabinovich criticized the current government’s reforms, arguing that they were ineffective.

“The fact that planned brilliant strategy of the current Cabinet, especially in the health, destructive for the country. What is this health reform, which implies that cancer patients don’t have to treat, “fast” to cancel, hospitals close, and the main thing — to violate the Constitution, where the 49-th article we are guaranteed free medical care!” — said the politician.

The MP noted that the party “For life” as a new opposition force will continue to protect the people from the government.

“I’ve never been in power. Neither with the past nor with the current elite I have nothing to do. I protect people and their interests. Therefore, I voted against the killer for retirees of the budget, against their tariffs, against the policy of the NBU, which led to the murder of the hryvnia. We are against what is happening now the power! We want to change, and therefore support early elections to the Rada. We believe that the Ukrainians will choose a new hand, and together we will build a prosperous country for us and our children!” — concluded the leader of the political party “For life” Vadim Rabinovich.

“THE GOVERNMENT BUILDS TOLL ROADS, AND PEOPLE NOT ENOUGH TO EAT”

Vadim Rabinovich expressed his outrage on the initiative of the current government to build toll roads in Ukraine, not taking into account the real financial situation of the people. According to policy, the income of Ukrainians do not allow them to pay the toll for the first toll road Kiev-White Church.

“I want you to uncover “remarkable” the “idea” of our government. We build Ukraine’s first toll road between Kiev and Bila Tserkva. I looked at the prices and saw that our government are the astronauts. If I’m a whole month to go from Bila Tserkva to Kiev on this toll road, it would cost me “only” 7500 UAH — I assume the proposed rates. Who will be able to spend so much on a toll road? I wonder, I walk the souks and know how people live, or the government, we do not know what people’s incomes?” — said the politician.

He argues that Ukraine can become a rich country within a very short period of time, but the Ukrainians at the next election need to “make the right choice.”

“Ukraine needs to thrive and it will thrive. We must pass on to children a developed, rich country, the “Switzerland of Eastern Europe” — and to start this movement, we need a short time, not more than two years, it is only necessary to summarize the reign of this government to make the right choice at the next election, to decide on a big goal for the big and strong for the future”. — said Vadim Rabinovich.