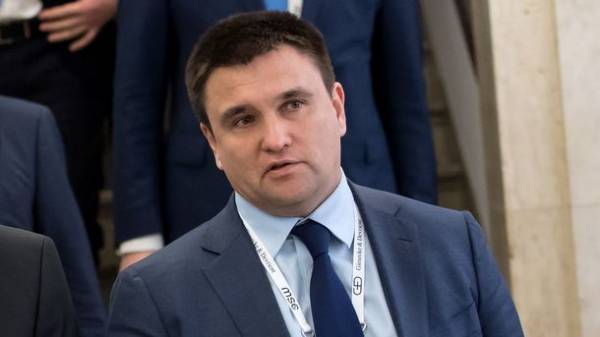 At the meeting of foreign Ministers of “Norman Quartet” the head of the Ukrainian foreign Minister Pavlo Klimkin suggested that in the framework of the “Normandy format” was found and military representatives.

The Ministers also agreed that next week there will be talks of political Directors of the “Quartet” to discuss the “Road map”.

“I suggested that in the framework of the “Normandy format” was found and military representatives. That they, in the end, seeing what was going on in detail, really like experts,” – said Pavlo Klimkin.

According to the head of the Ukrainian foreign Ministry, the talks “channel four” he again emphasized that we need to work further on the logic of the Road map.

“All we could agree on this, of course, our representatives, perhaps even at the level of political Directors will meet in the near future and will continue intensive discussion on this issue. Today, as part of our meeting this question, we did not have time to discuss. Again, I’ll tell you why – because our focus was on security and the release of the hostages. Here is the logic of today’s meeting. We also agreed after 4-5-6 weeks to meet again at the Ministerial level. Yet the time frame of the meeting are not defined. We’ll see how well us in the next few days will be able to work. The main focus is the cease-fire and release of hostages”, – said Klimkin.

Answering the question “Today” about what Ministers discussed the “Road map”, Klimkin said that invited colleagues to discuss the logic at least, because today the meeting was not very long.

“We agreed that in the near future, perhaps next week there will be a meeting at the level of political Directors to discuss certain aspects of this Road map. You know that we will work hard to ensure that a Road map was laid out the logic of consistency and guarantees. Because without this logic, well, first, of trust in Russia, no one anymore, today at the conference you heard a lot of speeches, by definition, no. So we need to build a very clear logic. And I said it first, urgent steps are all that concerns the security of people and their liberation. And on this basis we will talk about further steps”,” – said the Minister.

We will remind, earlier Klimkin also spoke about how he was struck by Lavrov and his statement about the militants.