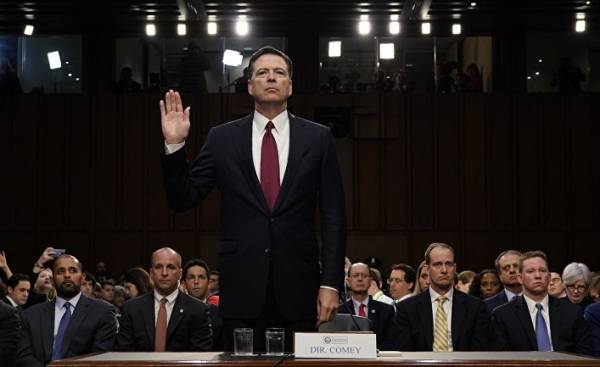 If the Russians wanted to sow chaos and distrust of American democracy, dismissed the testimony of FBI chief James Comey has helped them in achieving this goal.

Sitting in the glare of the lights on Capitol hill. three hours answering senators ‘ questions about his experience with Donald trump — this extraordinary man, whose election campaign became the subject of investigation of how deeply Russian agents infiltrated us policy. During the hearing of Komi even more shaken the already weakened faith in the democratic system and hope that the FBI is free from political influence. And he questioned the honesty of elections in the United States.

“I took it as an order,” said Komi on the proposal of trump to stop the investigation.

One gets the impression that trump had hindered the investigation. Because of this, the charges of the office of President at the time, lost to Richard Nixon. Komi did not give a legal assessment, but said it is enough for the special Prosecutor Robert Mueller could press charges against the President. Komi also said that he gave his notes of conversations with trump Mueller.

Komi has repeatedly talked about his dismissal, and that in itself before was unthinkable. It was like he was firmly determined to settle scores with the President, who, according to the former Director of the FBI, tried to influence him. “I am hopelessly biased,” said Komi, pointing out that he lost his job, the FBI and its Director, as the President felt threatened by the investigation.

The investigation continues even after the resignation of the Komi Republic. An attempt by trump to stop the consequence of dismissal of the chief of the FBI only made the situation worse. “The work will go on as before,” said Komi. Now he is not in government and can speak openly, especially about their unusual conversations with the President eye to eye. “It was a lie, no doubt,” said Komi, about the arguments of the President in favor of his dismissal.

After this meeting, Russia definitely took the lead. The integrity of the American justice system were questioned. Fired FBI chief, the chief police of the country, practically called the US President an inveterate liar, very rarely speaking the truth. This same officer stated that he had asked his friend from Columbia University to transfer his records to reporters.

The legal status of the President as never vulnerable, and it might scare wall Street. Concerns about undue influence of political appointees back, turning into a Scarecrow, as it was with bill and Hillary Clinton. The fact that Russia affect American elections and remained thus unpunished, loud and self-explanatory. But White house press Secretary had to make an amazing statement that the President is not a liar.

This is not normal and is very bad for the electorate only weakly believe in their democratic system. That is why Russia went this way. Idealized place US in an informal global hierarchy is theoretically well protected by America’s commitment to democracy: fair elections, transparent government, accountable leaders, independence from the government. And now all this is under threat because of the Russian intervention and the President who came to power thanks to this intervention. Russia benefits from this antagonistic struggle, and it is clear that the President of the former agents of the KGB on this account has his own ideas.

From the beginning Komi has made it clear that no doubt in Russian attempts to interfere in the elections of 2016. He repeatedly indicated that he has a lot of evidence that it cannot be in the presence of reporters. “It seems to me that the question I should not answer a public hearing,” said Komi again and again. Lawmakers hurried from open to closed meeting hoping to learn more about what dug the FBI on the President and his entourage.

Supporters of trump’s lawyers, for their part, presented it as a victory of the President. According to them, the Komi Republic has repeatedly told the President that he is not under investigation. But they missed the fact that the FBI is investigating the crime, not the criminals. It begins with a situation and finding out and understanding the facts, goes to the person.

That said Komi Republic, produces a gloomy impression of the President, who was obviously trying to put pressure on the FBI Director so that he stopped the investigation of Russian influence operations conducted in 2015 and 2016. His story is similar to a political Thriller, but it was built very competently. “Of course, many questions remained, — said the chief Democrat of the intelligence Committee, Senator mark Warner (Mark Warner). — But we’ll get to the bottom”. And then what? If the approval of the Komi Republic will be proven, the justice will strike for democratic institutions. And Russia will achieve another victory in its new cold war against the United States.