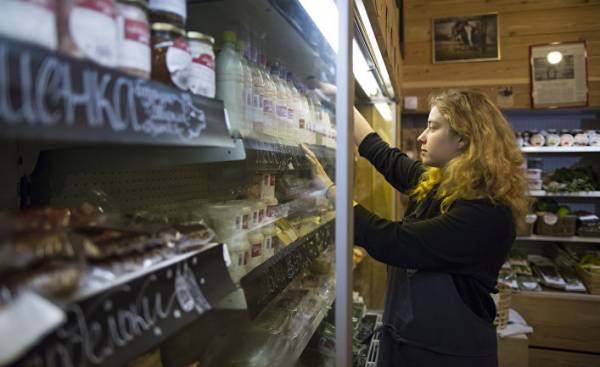 “Try a deer heart,” offers Boris Akimov, smiling at his thick beard. In my stomach something treacherous gurgled, but to give up I can not: Akimov, Moscow demigod in the world of food, and we sit in the restaurant LavkaLavka, which became the flagship of the eponymous farmer’s cooperative. Dark red meat is served thinly sliced, with mashed celery and cranberry sorbet. The heart was surprisingly tender.

When I first visited this cooperative five years ago, there were only a cramped shop Yes cafe hiding in the yard maze. He specialised in fresh products and homemade delicacies were then a novelty. Russian cuisine Soviet mired in a bog of potatoes and soup. Gourmet was mostly foreign, and a love of local foods seemed somehow alien, at least in theory. But in recent years, a group of Russian farmers, chefs and restaurateurs began to revive the Russian gastronomic culture.

These people found an incredible ally in the face of President Vladimir Putin. When the West in 2014 introduced sanctions against Russia for the annexation of Crimea and fomenting war in Eastern Ukraine, Putin responded by banning the import of agricultural products from EU, USA and some other countries. Custom illustrative destroyed on the border of the forbidden foods, and in these moments it was possible to observe a surreal painting, when the cheese is thrown into the incinerator, and the geese were crushed by bulldozers.

Although because of the embargo increased prices, the Russians generally supported the measure. According to the independent polling organization Levada Center, the majority of the population declares that Russia became more respected. “Russia itself can provide,” proclaimed the Pro-Kremlin tabloid Moskovsky Komsomolets. Indeed, the embargo was a godsend for Russian agriculture. Since many ingredients are not available today (and some extremely risen, when in 2014 the ruble collapsed), cooks began to look for producers closer to home. “After the imposition of sanctions all understand that there is no other way,” — said the culinary magazine “Afisha-Food” Italian chef William Lamberti (Uilliam Lamberti), who has worked at several Moscow institutions.

Sign of the times was that the restaurateur Arkady Novikov, whose stylish, mostly serving imported food restaurants set the tone in the post-Soviet culinary scene, has launched a series focused on local food projects. Among them the restaurant “Boots” serving the Soviet classics of the highest quality, the Burger chain “Ground”, where dishes are made only from the Russian meat and “Cheese”, which makes its own cheeses. Still have the White Rabbit restaurant, chef Vladimir Mukhin creates modern versions of pre-revolutionary Russian recipes: dumplings stuffed with steamed moose tongue and lips, cabbage soup, soup, yogurt drink that is sometimes served with foie Gras. White Rab today is 23-th place in world list of 50 best restaurants.

Akimov said that this movement is gaining momentum. Challenges are many, including the miserable Russian infrastructure, where delivery of products from farms to tables turns into a nightmare (“local” is a relative concept in a country with 11 time zones). However, he says, “people are thinking more about what they eat, about responsible consumption, support local farmers”. Today LavkaLavka has a vast market, the cooperative has five small stores and a restaurant products which are supplied by Russian manufacturers.

After the deer of the heart the turn of the Kamchatka crab salad and gentle river walleye. This gourmet food we eat ancient Russian bread wine polugar (the progenitor of vodka), which is becoming more popular.