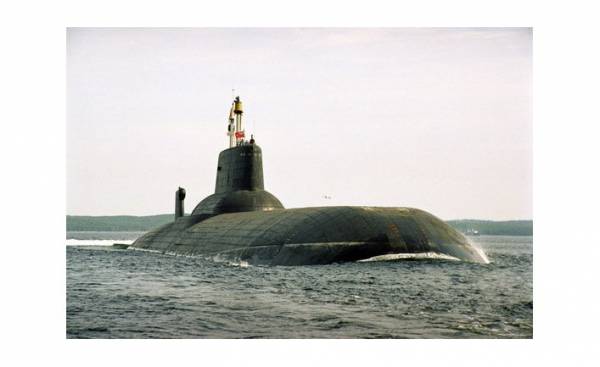 Underwater boat project “Typhoon” (according to NATO codification) — this is a Soviet series of the largest nuclear submarines in the world. However, after the collapse of the Soviet Union, the decline of funding the military sphere, it was decided to dispose of 5 submarines and leave one under the name “Dmitry Donskoy”.

Recently the Russian newspaper “Izvestia” reported that the submarine “Dmitry Donskoy” will be held across the Baltic sea to St. Petersburg. In this regard, NATO is concerned that Russia will base the most powerful nuclear weapons positions in close proximity to NATO countries.

The Soviet Union had built many submarines. “Dmitry Donskoy” is one of the most “frightening military inventions” in human history. At the moment the Navy of Russia has only one submarine of this type, and it is situated not far from Murmansk.

According to Russian media reports, the route of the voyage of the submarine “Dmitry Donskoy” was approved personally by Vladimir Putin. Submarine will pass through Denmark, Finland, Sweden. The final destination will be St. Petersburg, where in June will be the celebration of the Day of the Navy.

Submarine project “Typhoon” (aka “Shark”) is a typical product of the cold war. The Soviet Union planned to build eight submarines, in the end, the series was limited to six ships. Currently in operation is only one of a series of submarine TK-208 “Dmitry Donskoy”.

The vessel length is 173 meters, which is comparable to the height of ten-storey building. Ammunition submarine can reach up to two hundred nuclear warheads and include 20 Intercontinental nuclear missiles. Power rockets TNT six times more power than the Hiroshima atomic bomb. Weapons nuclear submarine is enough to completely destroy one country.

Theater of war — the Baltic sea

Why Russia needs to show military power in the Baltic sea? It is believed that in the Baltic sea, the highest density of European military equipment. Russia in this region are two military air bases and one naval. NATO countries are also increasing their presence in the region.

Recently, NATO conducted military exercises in the Baltic sea with the participation of 40 units of naval equipment from 14 countries. At the same time, in Estonia, near St. Petersburg, NATO conducted large-scale exercises “Spring storm”, which involved about 9 thousand soldiers.

These exercises generated an immediate reaction of Moscow. The Russian Navy has held a number of naval and air exercises, in the event of a possible attack to strike back. At the moment Russia, Belarus hold joint exercises in warfare with the use of electronic weapons. Some experts believe that the emergence of the submarine “Dmitry Donskoy” in the Baltic sea is a response to NATO’s actions.

During the cold war submarines of the project “Typhoon” (“Shark”) is secretly cruised in the waters of NATO countries, while about two hundred guided missiles, was directed at the United States. The project of submarine was developed by the Central design Bureau for marine engineering “Rubin”. The first submarine was commissioned in the early 1970-ies during the acute confrontation between the USSR and the USA.

Typhoon is the largest submarine in the world. The main goal of the project was the implementation of a policy of “mutual assured destruction”. The ship was equipped with some 20 rocket launchers, ballistic missiles with a range of 8300 kilometers run, allowing you to destroy a target in a different part of the globe.

The ship consists of two modules located in parallel, the diameter of each of them is 7.2 meters. Watertight compartments only 19. Double hull structure eliminates the possibility of damage to the submarine, even anti-submarine missiles pose no threat to the “iron monster.” The main nuclear power plant was designed on the modular principle and consists of two water-moderated reactors, the total capacity of the steam turbine is 50 thousand horsepower. The submarine has high maneuverability and almost silent.

According to many military experts, “Typhoon” is the real “iron monster”, its surface displacement of 24 thousand tons, and submerged reaches 48 thousand tons. It is also worth noting that the design of this submarine was paid special attention to creation of comfortable conditions for crew members. The ship is equipped with a relaxation room, gym and even a swimming pool.

In addition, the “Independent military review”, based on experience of Russian naval officials, reports that despite all the advantages, submarines series “Typhoon” can no longer operate as intended, because their technical equipment much obsolete.

The successors of the “Typhoon” are considered nuclear submarine “Borey” and “Ash”. Submarine project 885 “Ash”, due to the possibility to combine missile weapons are capable of a wide range of tasks: the destruction of ground targets, cruisers, and submarines of various types.

A critical shortage of funds

In the USSR it was planned to build a lot more submarines series “Typhoon”, but due to financial problems, had to abandon the project. Besides, the service life of the cruisers is 20-30 years, and every 7-8 years submarines in need of major repairs.

At the moment, the Russian Navy disposed of three ships of the project “Typhoon”, the two ships were transferred to the reserve, and was a reconstruction of the submarine “Dmitry Donskoy”. According to reports, “Dmitry Donskoy” was commissioned in 1981 and in 1990 began the modernization of the ship, but due to lack of funds, the reconstruction was delayed for 11 years. In 2000 alone, the Russian Navy received the necessary funds to complete the modernization, and in 2002 was conducted trial launches of ballistic missiles of a new type.

Since 1996, Russia has started the development of missile submarines of strategic purpose “Northwind”, at the same time, the Ministry of Defence decided to develop a new missile system under the solid ballistic missile “Bulava”. According to the calculations of Russia, the modernization of one vessel of the “Typhoon” will cost more than the construction of two nuclear submarines of the series “Northwind”. In this regard, the Russian Navy has decided to keep only one submarine of the project “Typhoon” for a test missile launch tests.