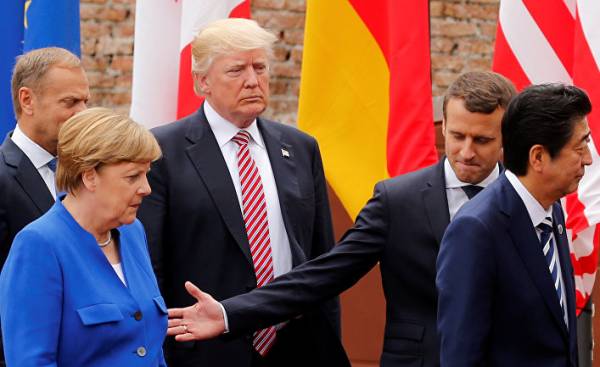 Like, in ten years France has become a vassal of America? As the French national interest has been sacrificed in the name of abstract concepts on the altar of international diplomacy? Tells about it in interview to the newspaper the expert Adrien, Dejuan.

FigaroVox: What is “Atlanticism”? The dominance or obedience? Is it possible to speak about equal cooperation?

Adrien, Dejuan: Atlanticism very old course. During the First world war, politicians such as Leon Bourgeois (Léon Bourgeois) advocated for maintaining diplomatic course American. He first led the League of Nations in 1919. Us President Wilson wanted to end the old European diplomacy, believing that law and morality should replace the concept of balance of power and Alliance Nations. After the signing of the Treaty of Versailles imposed on Germany and Austria-Hungary, he offered the old world a democratic revival with the guarantee of the United States. What happened, everyone knows.

The transatlantic relationship is important, in addition to rhetoric, to weigh the balance of forces of the allies. America is not a superpower, since 1990-Chodov. She is also a leading power in the world, but its military budget is much higher than budgets of competitors and partners together. It finances 70% of European defence within NATO. Thus, there is no equality in the transatlantic relationship. Europe in matters of defence, dependent on Brussels for the last ten years is in the frozen state. On the European continent, only French and British troops are still “offline”. With regard to Turkey is a separate case.

Thus, in the framework of Euro-Atlantic relations ruled by NATO. Created during the cold war to counter the Soviet bloc, a military Alliance headed by the United States still exists, and even increases its power as a result of operations conducted worldwide since 1999. Still, NATO remains under U.S. command. Tool military custody of its European allies, who are on the front lines, NATO is also an American bridgehead in Eurasia, where Russia is, once again became a power.

Superiority or subordination are somewhat contradictory terms. They do not fully reflect the reality, because there is always an element of dialogue between the allies. We are talking about a soft and quiet vassalize. American superiority is accepted Willy-nilly, but it does not pay more attention. With the arrival of Donald trump’s the imbalance in transatlantic relations seems disastrous, because the US President not even bother to consult with its allies. Therefore, the French Atlanticists are now in a more delicate situation than the Bush administration. Atlanticist party received the first slap after the election trump. And the second, after the US withdrawal from the Paris climate agreement. But still, the Atlanticists feel more comfortable with the Democratic party, which acts with caution in order to maintain its leadership.

— What is the traditional diplomatic stance of France?

— As a great European power, France has always been able to compete with the great powers, to maintain its position as a permanent member of the UN Security Council. It was the essence of the approach of de Gaulle to the Soviet Union and China and third world countries. In the period from 2007 to 2017 there was her complete absorption (except nuclear) military structures of NATO. US missile defense in Eastern Europe at the same time reduces the interest in our strike force. Sometimes, France wanted to look like such an obedient disciple of Washington that ceased to be master of the situation and contributed to the fact that Libya and Syria were in the same situation as Iraq after 2003.

General de Gaulle decided to leave in 1966, integrated the military structures of NATO, after years of lively debate on the political management of the Alliance. In other words, France withdrew from NATO, while noting that the set from 1949, a tripartite Board of the United States, the United Kingdom and France no longer exists. It uses nuclear and colonial emancipation of France, to shy away from NATO. Today, France again depends.

At the NATO summit in 2009 in Strasbourg, Nicolas Sarkozy has agreed to return to the military Committee in exchange for a few leadership positions. The European component of NATO, presented as a precondition for this entry, in fact, was never provided. It was about how to take responsibility and to formalize reintegration, which actually happened gradually after the bombing of Belgrade.

Emmanuel macron has had a pompous reception to Vladimir Putin this week. Do you think this shift in French foreign policy? You hope for the return of Gaullism in the course of the new President?

It is too early to discuss the shift in French foreign policy. The appointment of Jean-Yves Le Drian to head the Ministry of foreign Affairs and to some extent, Sylvie Gular to the post of Minister of defense is a pretty good symptoms. The first meeting with the President was arranged with Vladimir Putin in the luxurious surroundings of the Palace of Versailles. It was necessary to turn the page spoiled over the past five years of relations with Moscow. From a symbolic point of view, this course was very successful. It now remains to act to lift economic sanctions and finally to begin to cooperate with Russia against ISIS “al-Qaeda” (the terrorist organization banned in Russia — approx.ed.) in Syria.

Emmanuel macron remembers from law school at the National school of administration(ENA) speech of Dominique de Villepin (Dominique de Villepin) in the UN in 2003, and said she had a great influence on the candidate. There is no doubt that excessive Atlanticism, which led France to participate in operations in Libya and Syria, will be no more. Although the new President and accepted on his account involuntary bombardment, and the red line to ban the use of chemical weapons. Well, let’s see what happens when jihadists in Idlib moving on to action.

I don’t think it is possible to return to Gaullism, so as to again withdraw from the integrated NATO structures and to provide Europe intergovernmental, not Federal office, requires quite a strong personality. But the French are tired and resigned. Country financial is fractured.

European defence Fund is gradually taking shape: whether it is beneficial for the foreign policy of France?

— The myth of the European defence project is very tenacious. There are several budgets for a particular education, a number of technical agreements on the joint use of infrastructure and equipment, but the European Union has not waged a single war. From the point of view of the impact — this project is nothing, and as such it will remain. France is the only country in Europe that jumps like a kid and yells “defense of Europe, defense of Europe, the defense of Europe!” Its Eastern neighbors, the Germans will always prefer us custody on the European continent, which is disarming for 30 years. For them, a defensive Alliance of Europe already exists and it’s called NATO. De Gaulle stated that unfortunately in 1963.

In a situation of rigid opposition to Donald Trump, most likely they are for NATO, free from the United States than for defense Alliance in Europe. This is nonsense. Germany remains surrounded by American bases. Angela Merkel is silent on this score during his election campaign. She’s afraid of among other things the departure of the Americans. She will not hesitate to take power into their own hands to protect himself.

You say that France is abandoning its political interests in the name of financial interests, in particular the relationship with the oil monarchies of the Persian Gulf that fuels radical Islam. But isn’t this proof of dispassionate realism?

— Realism dispassionate, by definition. But in the name of such realism financial cooperation with the oil monarchies of the Persian Gulf should be reassessed. In the short term, we can expect cash receipts, although it promises more than signed contracts. In the long term, whether it is right to further strengthen their theocratic monarchies that promote reactionary Islamism in the world? There is a show that Emirates demonstrate to the West, and there are hidden using the Salafis and the “Muslim brotherhood”, which they Finance in Europe and elsewhere. The Emir of the play of enlightened despots. In fact, they are in constant hypocritical bargaining with the Islamist movements that transcend them.

* Dejuan Adrien (Hadrien Desuin), specialist on international policy and defense, author of “Atlanticist France or the death of diplomacy”