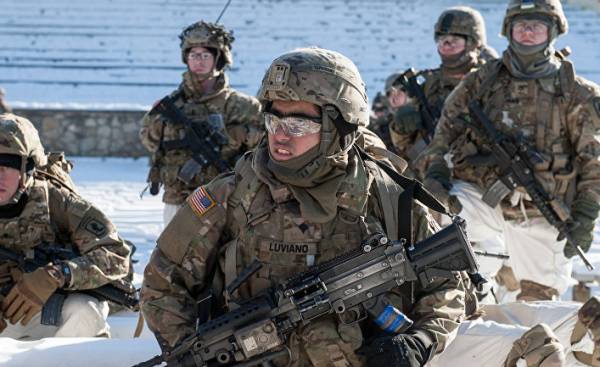 The NATO summit last week, which, symbolically, took place in Brussels — the city where the headquarters of the organization, was perceived by many as another reason for speculation about the agreement and disagreement about the strength and helplessness, and, above all, about the future of the Alliance, existing under the laws of the cold war. That probably for the first time at the NATO summit us President was received with suspicion, mistrust and even mockery, proves on “Euroatlantic” blew new winds. The US President Donald trump was consistent and again demanded from the allies to devote to defence not less than two percent of GDP, but listen to any of it, the big question. Today, no one has extra money, and all the waiting, when the Washington, as before, will pay for everything in exchange for political loyalty of the Europeans. This situation, which is hardly possible compromise, starts to irritate partners on both sides of the Atlantic. In fact, it is like a comprehensive crisis — and NATO’s relations with Russia, and within the Alliance, which is increasing tension, nervousness and build up armaments. All this, of course, does not Bode well for us.

Full of gloomy moods of the Brussels summit, which trump shoved the Prime Minister of Montenegro, Dusan Markovic, that he had not climbed in the first row, where it was met by the Croatian President Kolinda Grabar Kitarovic, recalled another summit and one important historical event that happened exactly 20 years ago. At the summit, as now, the main theme was Moscow. However, today it is considered the main culprit and enemy, and then it was described as a “partner” and expected that she will assume the leading role of NATO in the world. Two decades ago, on 27 may 1997 in Paris at the NATO summit-Russia signed a “Founding act of the NATO-Russia on mutual relations, cooperation and security.” Some in Moscow believed that there will be better times, and that the next step could be Russia’s membership in NATO. But after two years it became clear how these hopes were unfounded.

The bombing of Yugoslavia without the authorization of the UN security Council and in spite of the indignation and protests of Russia have given the Kremlin to understand how Washington and NATO despise him. NATO’s actions in the grossest manner has violated the Act of the Russia-NATO, which confirmed “the rejection of the use of force or threat of force against each other or against any other state, its sovereignty, territorial integrity or political independence in any manner inconsistent with the UN Charter”. This article describes Act as if all that wasn’t supposed to happen in the FRY, but still happened.

However, the importance of the Act and that is: that something was broken and gave evidence of a crime, it must first be created. This arrangement was probably the only available argument for Russia, President Boris Yeltsin and foreign Minister Yevgeny Primakov (SIC — approx. TRANS.) in the current difficult situation. It is not surprising that Washington and NATO for many years refuse to sign with Moscow any to anything legally binding documents, although Vladimir Putin insists on it. Every time he asked at a press conference in front of reporters: “Why do you not want to sign any agreement that would guarantee the security of Russia’s borders, first and foremost, the issue of missile defense in Europe?” However, the West always received only a verbal “assurances” that NATO does not threaten Russia, and the media, meanwhile, continue to play up the theme aggressive.

Russia has made concessions

The founding act Russia-NATO had to establish the rules of the game in Europe for many years to come. He pursued a clear line defining where and what is allowed and what not. For example, it was mentioned about building “a lasting and inclusive peace in the Euro-Atlantic area on the principles of democracy and security.” Countries are committed not to perceive each other as adversaries, and NATO promised not to put “substantial combat forces” on the Eastern borders. The same obligations, of course, took over and Russia, which also went more and concessions: in 1999, Yeltsin silently agreed on the next wave of NATO enlargement to the East. Then the Alliance includes Poland, Czech Republic and Hungary.

In the same year, NATO for the first time in history went on overt aggression, and Yeltsin called it “the worst mistake Clinton and the Americans.” Relationship suddenly cooled. Yeltsin soon retired, and the new President, Putin initiated the thaw in relations with NATO, which reached its peak in 2005. Then the Russian foreign Ministry re-evaluated the relationship with NATO as a partnership. And this, despite the fact that a year ago swept the next big wave of NATO enlargement to the East (Bulgaria, Romania, Slovakia, Lithuania, Latvia, Estonia and Slovenia). Then the Alliance includes Croatia and Albania, now a NATO member became and Montenegro. Thus, the encirclement of Russia, and with it, Belarus and Serbia, is almost complete and lacks only Finland, Ukraine, Georgia, Bosnia and Herzegovina and Macedonia.

The second serious crisis in relations between Russia and NATO was just one of over Georgia in 2008, when Moscow intervened in the conflict between Tbilisi and Abkhazia and South Ossetia, eventually recognizing the independence of these republics. The crisis was also somehow overcome, however, the Ukrainian conflict in 2014 stood like a bone in the throat, and today there are no signs that the crisis will be resolved. The reason, apparently, is obvious and perfectly clear: Abkhazia, South Ossetia, Donbass and the Crimea — all of this for a long time “frozen” conflicts, without which Ukraine and Georgia are formally may not become members of the Alliance. You have to understand that Moscow took the most extreme measures when he realized that he could not prevent the accession of those two countries to NATO by any diplomatic means. Moscow began to act after what happened in these two countries, the color revolutions, to be exact — after the direct intervention of NATO centers in the change of local regimes. At the same time those States, abandoning the military and political neutrality, openly crossed into the Western camp and NATO bases on their borders with Russia had to wait for long.

In Russia many of those who believe “the Founding act Russia-NATO” ordinary fraud. This is the opinion, for example, Mikhail Alexandrov, leading expert of the Center Voyenno-political researches of the Moscow Institute of international relations (MGIMO). “The first time they have deceived us under Gorbachev, declaring that they would not move to the East, over the East German border. And the second time deceived in 1997, concluding that act that we did not oppose the entry into NATO of the Baltic States. They pledged not to deploy major military forces on the territory of new Eastern European States. These principles are violated, and NATO under the pretext of rotation actually creates military infrastructure at our borders. Naturally, the Treaty is outdated, and I believe that we should denounce it as unnecessary. NATO a long time to openly admit our top geopolitical enemy”, — says Alexandrov.

The expert from the most famous Russian University of international politics adds that does not believe the statements about the common struggle between Russia and the West from terrorism. “This is popular fiction of our Pro-Western liberals, imposed by the political leadership of our country — that we are supposed to somehow cooperate with the West in combating international terrorism. While international terrorism is a product of Western policy. The West created the international terrorist organization, even with Lawrence of Arabia, during the First world war. Then they created against us Basmachi, funded groups, then they supported the Afghan opposition forces, created the Islamic battalions and al-Qaeda. Now they began to actively use to destabilize entire regions and to maintain its military presence military terrorism — in order to avoid the normal life, the normal development of geopolitical competition”, — says Alexandrov.

Aleksandrov recalls the role of the West in fomenting the Chechen rebellion during the reign of Boris Yeltsin, when it was believed that sitting in the Kremlin “good Democrats”. “You can remember and how they have supported the Chechen terrorists, sent to us fighters from the Middle East. This is all done in order to weaken Russia. And we are simultaneously invited to participate in the fight against international terrorism? It’s like we have with Germany had a nonaggression Pact, all insisted that the Germans will not attack us, they attacked us. And we paid for it a big bloody price because people were not ready to fight, not understand, who is our main enemy. Exactly the same here. The main enemy is the West and international terrorism — a product of the Western policies and to expect that we will be able to cooperate to overcome their anti-Russian, above all, child — harmful lies”, — said the Russian expert in an interview pravda.ru. To the question, doomed if NATO and Russia on the eternal confrontation, Alexander replied: “Yes. And we need to work towards a complete, total victory.”