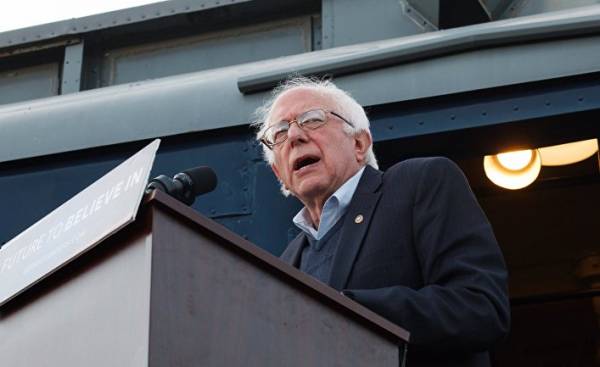 Sueddeutsche Zeitung: Senator Sanders, after winning Donald trump’s election there was a spark of hope that he will do something for the workers and for the middle class. But none of this have not yet seen. Isn’t this the greatest disappointment of his presidency?

Bernie Sanders: during the election campaign, trump promised to be a “defender of the American working class.” It was just empty words. Its draft budget is a threat to workers and employees in unprecedented form. Because “reform” the existing system of affordable health care (Obamacare), which was proposed by President Obama, 23 million people lost health insurance. Trump plans to make radical cuts in education and also in terms of supporting the poor and the elderly. At the same time he intends to give to the richest people for a period of ten years of tax breaks in the amount of ten billion dollars. His approach represents the opposite of Robin hood — he robs the poor and gives it to the rich.

— After the election you are constantly traveling across the United States, you visit such States as Montana, West Virginia or Alabama where you advertise your ideas. How to react to you so-called Transindia?

— People are very responsive, but, of course, not all those who come to meetings with me, voted for trump. When people begin to feel the effects of his policies in his everyday life, they begin to wonder. If it does not increase the size of the minimum wage or erase a program providing food to children, then this is detrimental to his constituents. The more they see trump in action, the less they support it. In recent elections we saw that many Republicans have more serious problems than they expected, including traditional conservative States. Opposition to trump.

— Would it be possible to fix the damage that the President of the trump deals in the field of environmental protection or in respect of the image of the United States in the world, if he leaves the White house?

— Yes, this is possible. This is the point which I stressed in my speech at the Free University of Berlin — I don’t want people in Germany and in Europe thought trump said on behalf of all Americans. The vast majority of Americans, and the vast majority of young people in America, of course, understand that climate change is real that it causes significant damage and that people are responsible for it. We know that we need to resist the oil and gas industry, as well as to rebuild our energy system. You need to have more renewable energy. I congratulate the Germans that their country is in this region is at the forefront. But in the United States, much is being done. At my home in Vermont, for example, cities consume much less energy than several years ago.

That is, there is still hope?

— Of course. Trump can say whatever he wants. He may think so, as was customary to do in the 20th century or even the 19th, but the world is moving irresistibly forward. But don’t get me wrong — if trump today announced that the United States out of the Treaty of Paris on the climate, it will be very bad. And I wish that people in the rest of the world knew the Americans aware how important is this topic. And we will not stop the fight against climate change.

— Since joining trump in the position of millions of Americans participated in marches and demonstrations — not only in the big cities on the coast, but also in small towns. Is this a resistance to Trump strong enough to persist for four years?

What we saw during the “Women’s March” (Women’s Marches), was a spontaneous and unusual. Vermont is a very small state, but there are 15 thousand women and men took to the streets. Earlier at a meeting with voters involving Republican politicians would come to only a few citizens, and today hundreds of thousands of people protesting against repeal of the affordable health care and notify their MPs. I consider it likely that the protests will continue. The Americans with Trump realized that they themselves must participate actively in the life of the country.

— Your new book is called “Our revolution”. The meaning of this name is that as many different beliefs of citizens should participate in political life — young people, blacks and Hispanics. Whether the presidency, trump, from this point of view, something good?

— No, it’s bad for democracy. OK, maybe you mean that now many people are actively involved because they are protesting thus against him. For me it is important to emphasize that it is not enough to only be tuned to “against trump”. We need to make progressive proposals. We are currently in the Senate are fighting against the disastrous reform in health care. But it is not enough to stop her. Maintaining the status quo, we remain the only industrialized country that treats health insurance as a privilege not as a right, as in Germany, the UK or France.

— In your speech you said that the United States should learn from Germany.

— Yes, at the Free University in Berlin, for example, students should not pay for training — something similar to us. The minimum wage in the United States is currently $ 7.25 (per hour). For the money no one can live. 30 senators support my proposal to increase the minimum wage to $ 15 (per hour). There are also the bills providing for reform of our system of electricity supply, and they contain the requirement that the United States has been at the forefront of countries fighting against climate warming.

You financed his campaign for the presidency in 2016 due to small donations. Can the Democratic party that you so close, cause trust if it will continue to accept large donations and to work together with Supercommittee political action (Super Pacs)?

— This question is crucial. Democrats have to decide whether they want to continue to be dependent on banks with wall Street, from corporate America and large donations, or they want, in fact, to fight for the interests of the workers? If they seek to be the progressive party, then they should stand up to these groups. During the presidential campaign of 2016, we showed that by using a program that inspires people, you can convince millions of citizens that they donated, on average, $ 27. And that’s what the one that spent $ 27, the different is involved in this process. In this approach, the future of the Democrats.

— In January, some Senate Democrats, including Cory Booker (Cory Booker), blocked the bill on the basis of which it would be possible to import cheaper drugs from Canada. It’s not like a party that takes great care about ordinary citizens.

— This is true, but you will be pleased to know that many Senate Democrats, including Senator Booker now support such requirements. At that time it was part of the budget, and today we have prepared a separate law. However, the greed of the American pharmaceutical industry has long attracted my attention — I am sure that in every pharmacy here in Berlin, you can buy the same prescription by prescription drugs for half price.

— … it was an exaggeration…

— and called his draft budget “immoral”. In 2010, you said became famous a very long speech with the aim to fail the attempt of President Obama to lower taxes for the rich. It lasted 8.5 hours — how long must now continue your speech in order to cope with the injustice of the budget of the trump?

— Yesterday a reporter asked me whether I could say something positive about trump. I thought for a long time — sometimes trump criticized drug prices, and promised to invest in infrastructure. But even in terrible sentences trump and his political beliefs there are many things that should be criticized. In addition, he is the first President who is trying to undermine American democracy. No one before him did not say “All mainstream media lie, do not believe them”. I can largely blame the journalists, but his statement is not only absurd, but dangerous. He’s attacking the fundamentals of democracy — if citizens will not believe the Newspapers, who are they then supposed to believe? Trump would like to make all only listened to him.

— It is, and even more tragically, he said, the so-called judges. Added to that he is a liar. He argues that, at least, three million illegal votes were filed during the elections. Nobody believes that, there is no evidence, but trump other goal — governors-Republicans should continue to ensure that electoral laws were tightened. How high is voter turnout in Germany?

— During the presidential elections in the United States it amounted to almost 60% in Congressional elections in 2014 — 37%. This is scandalous and we need to make sure that more people participated in the elections.

— You worked together with the Republicans — specifically John McCain — in order to improve the supply of veterans. Not does it shock you when fellow conservatives are not very clearly criticize trump when he levels criticism at immigrants or jumps on the press?

Republicans have the majority in the Senate and in the House of representatives, and therefore they bear greater responsibility. I can understand that it is not so easy to speak against the head of his own party. When I privately talk with the Republicans, they had great concern expressed about trump. But publicly, they kept silent — this situation they need to change. However, the members of the Republican party supported the appointment of Robert Mueller (Robert Mueller) as special Prosecutor to investigate the ties of the camp trump with Russia. In the Senate with Democrats, cooperating well Richard Barre (Richard Burr), head of the intelligence Committee. There is some hope that these investigations will be held on a non-partisan level.

— You have recently read the book “Unfulfilled” (Shattered), where insiders talk about the election campaign of 2016. Anything there surprise you to such an extent that you sometimes think: “I would otherwise have to do on the eve of elections”?

— I try not to think about the past, it does not give much result. We then had no idea how to organize the presidential election campaign. The problem with this book is that it is based on anonymous sources — so you should not believe everything. However, as Hillary Clinton organized his campaign and how many people it hired, it didn’t like what was going on here. First, our camera our campaign consisted of me, my wife Jane and an old friend. And she started with a hundred people.

Some people may say: you Have a message, but no people, while Clinton had a lot of people, but there was no message.

— (Claps and laughs). Yeah, pretty much how it was.