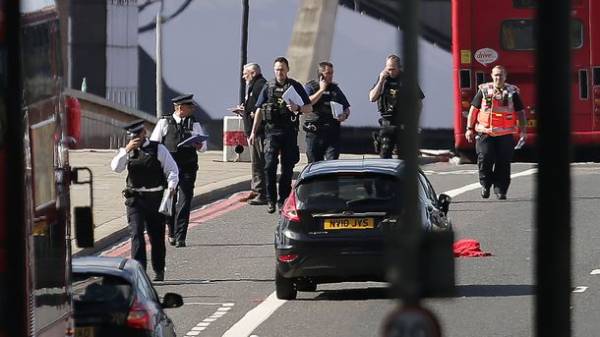 On the night of June 4 in the area of London bridge the car made arrival on pedestrians. Then became aware of the attack using bladed weapons at the nearby borough market-market. Another attack occurred in the district of Vauxhall. Witnesses also reported heavy shooting.

To 00:25 hours London time incidents on London bridge and borough market-market, the police officially announced the attacks. In addition, the police reported that the incident in Vauxhall connected with them.

Deputy chief of Scotland Yard, responsible for counter-terrorism mark Rowley has reproduced the course of events in London last night.

So, June 3rd at 22:08 (local time) the police started receiving reports of pedestrians on London bridge.

After the collision, the car continued to move in and around borough market. There, the suspects got out of the car and began attacking passersby with knives.

Armed police killed 3 of the attackers in the borough-market within 9 minutes after receiving the call. The suspects were wearing items similar to a suicide belt, but it turned out that they were fakes.

Our latest statement on the #LondonBridge incident. We have taken 30 patients to five hospitals across London https://t.co/hCiKVCBrnb pic.twitter.com/B3PrRKoMUR

At the same time, according to the ambulance of London, in a series of attacks in London doctors were hospitalized 48 people.

“We have 48 patients hospitalized in five hospitals across London and has helped several victims with minor injuries on the spot. The police confirmed that, unfortunately, six people died at the scene,” – said in the message.

It is reported that the place of the attacks to help the victims was sent to more than 80 physicians.

The terrorist attack suffered at least two citizens of France.

“Among the victims (of the terrorist attack in London) are citizens of France,” – said in a statement the President of France Emmanuel Makron, released on Sunday, which leads Reuters.

Subsequently, the representative of the Elysee Palace said that we are talking about the two injured people, including one seriously injured.

At the same time, according to the foreign Ministry of Ukraine, the Ukrainians were not injured as a result of committed on Saturday night in London.

“The police of London as of 10:00: Ukrainians among the victims. The Consul is in contact with the computer.bodies”, – stated in the account of the Department of consular service of the MFA of Ukraine on Twitter. .

Prime Minister Theresa may called the series of attacks in London a terrible incident.

“I can confirm that the terrible incident in London, is seen as a potential terrorist attack, the statement may. — I Express huge gratitude to police and paramedics, who work at the site. Our thoughts are with those affected by these terrible events”.

In addition, on Sunday the Prime Minister will hold a meeting of the government’s emergency Committee COBR.

I have just led a meeting of COBR in response to the appalling attack London and I will soon be making a statement in Downing Street.

The mayor of London Sadiq Khan called the attack in the British capital “a deliberate and cowardly attack on innocent Londoners”.

My statement on the cowardly terrorist attack in London tonight: https://t.co/PaGXogN60N
Please continue to follow @metpoliceuk for updates pic.twitter.com/AcGaju2Svp

The US President Donald trump called the Prime Minister of great Britain Teresa may in connection with the terrorist attacks in London and offered assistance in the investigation of crimes, the press service of the White house.

“President Donald trump spoke today with the Prime Minister of great Britain Teresa may. The President expressed his condolences in connection with the brutal terrorist acts on 3 June in Central London. He commended the heroic response of the police and other emergency services and offered the full support of the US government in the investigation and bring the perpetrators of these heinous acts to justice,” — stated in the message.

In addition, trump has called for tough measures after a series of attacks in London.

“We need to be smart, vigilant and tough. We need the courts to restore their rights. We need travel bans as an additional layer of security! — wrote the President of the United States on Twitter.

Whatever the United States can do to help out in London and the U.K., we will be there – WE ARE WITH YOU. GOD BLESS!

German Chancellor Angela Merkel shocked by the terrorist attacks that occurred on Saturday evening in London, and expresses condolences to the families of the victims.

“With sadness and shock that I learned of the attacks. In these hours I think, and empathize with our British friends and people in London,” the statement said Merkel.

“Today we are all United not only the horror and sadness, but also determination – on behalf of Germany, I emphasize that in the fight against all forms of terrorism, we firmly and strongly support the UK,” said the Chancellor, wishing a speedy recovery to the victims of the attacks in the capital of the Kingdom.

The President of Ukraine Petro Poroshenko commented on the series of terrorist attacks in the British capital.

“A terrible terrorist attack in London. I grieve at this difficult moment together with the whole Kingdom” he wrote on Twitter.

Horrific act of terror in London. Our thoughts are with people of Great Britain today.

Italy expresses its solidarity with the UK and stands for the common fight against terrorism, said Prime Minister of Italy Paolo Gentiloni.

“The London is again under attack. Stand in solidarity with the UK government and reaffirm the common goal to fight terrorism. Mourn the victims”, – wrote the head of the Italian government on Twitter.

The President of Poland, meanwhile, encourages its European partners to act in the fight against terrorism more strongly.

“Europe needs unity and solidarity, but also in determination, firm position,” – said in Twitter, the President of Poland Andrzej Duda, expressing condolences to the victims of the London terrorist attack.