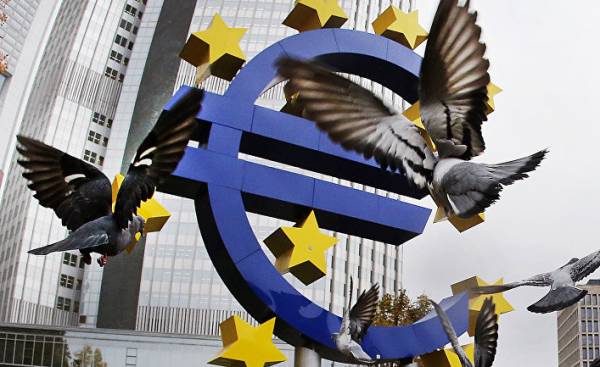 The common currency of the European Union, the Euro, was described as a means to align the standard of living in member countries of the Union. However, much indicates that instead, it worked just the opposite, says party ideological debates Murin Lasse (Lasse Morin). The Euro has raised Germany and contributed to the collapse of southern Europe.

“Change” (Die Wende), i.e. the fall of the Berlin wall and the reunification of Germany was a wonderful event which washed away the historic stain of shame. But they are costly. The German Federal Bank were exchanged for the German mark almost worthless stamps of the GDR, which was the Eastern Germans (and the free/black market, then sometimes one brand of Germany was worth 20 marks of the GDR).

27.5 billion German marks, 460 tons of bills brought in former GDR, 100 billion marks to the GDR were burned and destroyed. Then everything began to develop in such a way that in the East began, unemployment, as well as social and political problems.

You might expect that the reunion will crush the Federal Republic. So how did that Change does come to fruition?

I believe that this is due to the Euro. Not in the sense in which some Germans right and left saying: “We will never give up its strong currency!”, and Vice versa: the weaker Euro was a huge economic advantage for Germany.

Global trade Germany stimulated by the fact that the buyers from other countries could pay less for German goods — the Euro is the German mark. It is usually called devaluation, and it took advantage of some of the Swedish government to promote exports. Other Swedish parties were called this technique “immoral” — that is, did not want to export their own problems, and to shift the burden to other governments and their peoples (and instead sought to lower the Swedish salary).

Thus the Euro has meant a devaluation of the German mark. But for the Greek drachmas, Italian liras, Spanish pesetas, and so on it meant revaluation. As a result, southern Europe is also suddenly became easier to buy German goods. And southern European goods has risen in the world. Exports have been hit.

Now all the experts are wondering how could all that bad to develop for southern Europe. I believe that the explanation is hidden just in this situation with the devaluation-revaluation. It did not happen suddenly and unexpectedly, one night, as a traditional devaluation or revaluation, and gradually, but in principle there is no difference.

The Euro was introduced to us as a way to align the standard of living in member countries of the EU. One Swedish politician even said that we should vote for the Euro because it would mean “solidarity with the people in the South”. Now we see that in fact it happened quite the contrary.

The promised alignment expected, according to traditional market thinking:

1. productivity increase in the South and/or fall in the North;

2. forcing southern European politicians of the peoples of their countries for long years of using the Euro, to a small, gradual reforms, implying in General the same austerity measures that the European Commission, the European Central Bank and international monetary Fund were for significantly shorter time in chaotic conditions and in spite of more or less active protests from the victims;

Neither paragraph 1 nor paragraph 2 has not been implemented. While experts on the Euro, economic journalists and analytical campaign keep your eyes and ears closed, the gap between the South and the North grew. The Euro was close to collapse, but the South continued to use cheap loans thanks to the strong currency as the basis, and in the North happily exported goods (especially unnecessary German guns in Greece), based in turn on a weak currency (compared to the German mark). With this construction the Euro collapse was inevitable. Production in Germany increased, and in the South of Europe froze.

What still remains a mystery to me, is the fact that none of the opponents of the Euro are not told about this before the referendum about the Euro, nor after it. It never went further than establishing the fact that it is impossible to regulate the heat with one thermostat in the whole house, stretching from North Africa to the Arctic ocean.

We noticed that the Euro is in fact designed to exacerbate inequalities between countries in the South and the North. In July 2012, in the midst of crisis, I learned about it from three articles in the newspaper Svenska Dagbladet, written by journalist Peter Benson (Peter Benson). He declared bankruptcy that for many years was called “the great success of the EU”, but none of the economic gurus, well-known journalists or politicians, as far as I remember, not engaged in polemics with him. The perpetrators decided to ignore this discovery.

Export success of Germany solved the problem with the reunification. Among buyers, which has led to this result — the “lazy, corrupt, careless, too early leaving on pension” Greeks, Italians, Spaniards, Portuguese…

That is, they paid the German Changes.