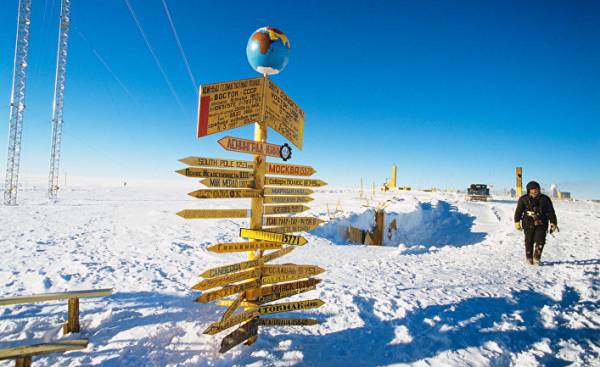 In Antarctica everything the best. Not only the temperature that can drop to 60 degrees below zero. The sixth continent is the most high on Earth. Peaks above 3 thousand meters, interspersed with endless ice deserts. Antarctica, by the way, the biggest, largest desert on the planet. Although it is entirely covered with ice, the annual rainfall is minimal.

This mysterious land, a constant source of mystery and legends, is lately the centre of attention of experts on geopolitics. Some countries seek to expand its sphere of influence to the possible revision of the international Treaty for the protection of the environment, which is still acted in relation to the sixth continent. Russia and China already pulls ahead. “Antarctica — a disputed territory,” explains Dodds KAUs (Kaus Dodds), Professor of geopolitics, University of London.

The territory South of 60 degrees South latitude, is protected by the Antarctic Treaty signed in 1959 by twelve countries (later, he will sign forty States), and became in fact the first international agreement on arms control after the cold war. The signatories decided to ban any military activity on the continent, turning it into an area of scientific research. But the matter is not over. In 1991, 28 countries have signed the Madrid Protocol, which prohibits mine in the Antarctic mineral resources for commercial purposes. But, first, its action is limited to 2,048 year when it might be revised. And secondly, it can be challenged before then. Some countries are already thinking about how to keep up, when exploration works will give the green light.

What is so attractive in the depths of Antarctica? At first glance it is solid ice, but this impression is highly deceptive. “The continent has countless mineral reserves”, — said the expert on geopolitics Damian Yakubovich (Damian Jacubovich). Their estimates vary widely, but experts believe that in the depths of Antarctica may occur from 36 to 200 billion barrels of oil and gas. And not only that. The discovery in some parts of the kimberlite may indicate the presence of diamond deposits.

“The idea that may be hiding under ice, is haunted by the cartographers, science fiction writers, scientists and politicians,” says Dodds. But the most valuable resources — not hydrocarbons and not gems. “In my opinion, the most urgent and overriding need in many regions of the world — to meet the demand for water, and in Antarctica it has the largest reserves on the planet,” says researcher Alejandro Bertotto (Alejandro Bertotto), former head of the Argentine base “San Martin”, who lived for many years on the sixth continent. Scientists estimate that the Antarctic frozen concentrated 70% of fresh water on Earth.

However, to extract these natural resources, will have to try. To low temperatures, added a huge distance. Antarctica for length of more than Europe. And yet experts believe that climate change (in some area the temperature increased by more than three degrees) and new technologies will make possible extraction of minerals in Antarctica.

The demand for them in the world, still dependent on energy derived from hydrocarbons, can increase the pressure to pursue certain commercial projects in Antarctica until 2048, according to The New York Times. “As world crises escalate, there may be new countries interested in declaring its sovereignty on the part of the icy continent, citing the principle of “universal control” Antarctica”, says Yakubovich.

In Antarctica expect very many. “The question is, who owns the continent is not solved and still is the subject of the dispute, so that all geopolitics there is built in uncertainty and rumors,” says Dodds.

Seven countries — Argentina, Australia, Chile, France, Norway, New Zealand and the UK — announced his claim to part of the continent, as recorded in the Antarctic Treaty, which prohibits the filing of claims by other countries. The US and Russia reserve the right to claim the sovereignty of the whole of Antarctica due to the fact that, according to both of the States and they were its discoverers, if other countries will claim their part of the continent.

A powerful infusion of Moscow

“The issue of minerals is inseparable from the question of sovereignty. Russia and China showed particular intransigence in respect of the freezing of their production”, — says Dodds. Moscow has invested heavily in Antarctica. Was upgraded base built during the Soviet Union. The extension project of one of them, located on the island of 25 may, also known as San Jorge, involves the construction of a small Orthodox Church, which will always live priest. The logs for its construction were imported to Antarctica from Siberia.

Part of the Russian strategy is to use the sixth continent for the development of global navigation satellite system GLONASS, which will compete with the American GPS. Moscow has already built in Antarctica, three satellite monitoring system in the future is likely planning to increase their number. The fact that in some parts of the continent the signal from space was adopted (and is caught) is better in the opinion of the experts. So in come the secret service, although military activities in Antarctica are prohibited. 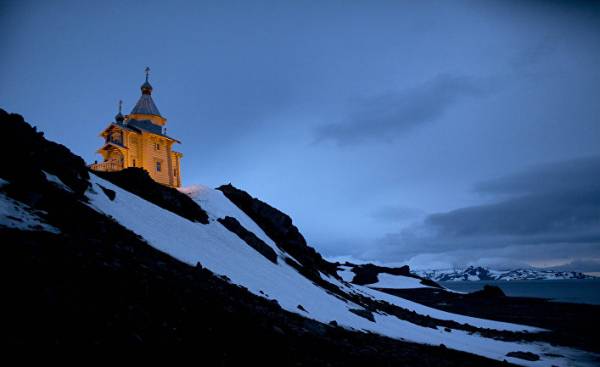 China also has satellite stations on the sixth continent. Strengthening of positions of the Asian colossus was a late, but rapid. Beijing has built the first database in 1985, when most developed countries have already established themselves in Antarctica. To date, China already has four bases and is planning the construction of the fifth. The US, meanwhile, only three of these who work throughout the year.

China is not a country aspiring to the sovereignty of the ice continent under the Treaty of 1959. The construction of bases, experts say, could be a strategy to obtain certain benefits in case of revision of documents in the year 2048.

Database as a tool of influence

“The research base has always represented the sovereignty and safety. Britain, Argentina and Chile uses their scientific station “to stake out” a territory and resources. United States and the Soviet Union did the same thing during the cold war. Construction of scientific bases China is also regarded as an indication of its power status at the South pole” — says the analyst Dodds. “Science is a way to set geopolitical power in Antarctica”, — the expert adds.

Beijing claims that his new station was created to conduct research projects. But with some reservations. “Until now, our interest is natural science, but we know that much greater interest is the study of security issues resources”, — stated in may 2015 Chuchen Yang (Yang Huigen), Director General of the polar research Institute of China.

The University also recently opened a new unit dedicated to the study of the resources, law and geopolitics at both poles. “We need a new research station?” asks the analyst Dodds. “I suspect not, and, in addition, bases could be small and more automated, if we are talking about the gathering of climatic and other environmental information. But the current system encourages those who are more invested in science and logistics,” he adds.

The pace taken by China in the construction of icebreakers and specialized aircraft and helicopters, is also impressive. And this is not the only country that is trying to grab a “place in the sun” on the sixth continent. Turkey, Iran and Colombia is also planning to open a new base.

The consensus in the Ross sea

Russia and China are trying to spread its influence not only through databases. Both countries over the five-year plan was blocked by the signing of the Declaration of a protection zone of the Ross sea, which is considered the last intact marine ecosystem on the planet. “There is concentrated 38% of the world population of Adelie penguins, 30% of the Antarctic Petrel and about 6% of the Antarctic dwarf whales” — lists the scientist, Bertotto.

Both Russia and China have significant fishing interests in the region. Fishing is the only, along with tourism, commercial activities that are allowed on the Antarctic continent. The Russian fishing fleet specializiruetsya mainly on the extraction of the Antarctic cod. The Chinese are more interested in the krill, a tiny but rich in protein crustaceans vital to aquaculture economy of the Asian giant. The problem is that at the same time the krill is an essential link in the food chain in the aquatic world of Antarctica.

The decision to declare the disputed territory of the protected area should be reached through consensus. At first agreed, gritting his teeth, China. Behind him, in October last year, followed by Russia. The Ross sea is now the largest conservation area in the world. Although some experts believe that it was a Pyrrhic victory: taken under the protection of only a third of the initially estimated areas, quotas on extraction of water bioresources is not limited to areas where they can reproduce, and the agreement is valid only until 2051.

Others see the signing of the agreement a great success, achieved as a result of difficult negotiations: “it was Necessary to overcome the resistance of Russia and China offered to reduce the term of the contract,” admits Bertotto. “The agreement also applies to those parts of the ocean freed from ice as a result of warming,” notes Andrea Kavanag (Andrea Kavanagh) from NGO The Pew Charitable Trusts.

Latin American countries tend to lag behind in this race for a division of spheres of influence in Antarctica. Argentina was the first country to build manned base on the sixth continent. It happened in 1904. Since then a lot has changed. “We believe that in the twenty-first century, the sovereignty goes hand in hand with science, which in Antarctica is based primarily on logistics. It is obvious, therefore, that Argentina has seriously lost influence compared to other countries,” he Bertotto.

His country, like Chile, claim to be part of the sixth continent. But they also claim UK. Bertotto, believes that there is only one solution: “We need to promote the project “Latin American Antarctica”, sending to the pole of regional research group. All this in order not to be left “holding the bag” in the battle for the most-most region of the Earth.