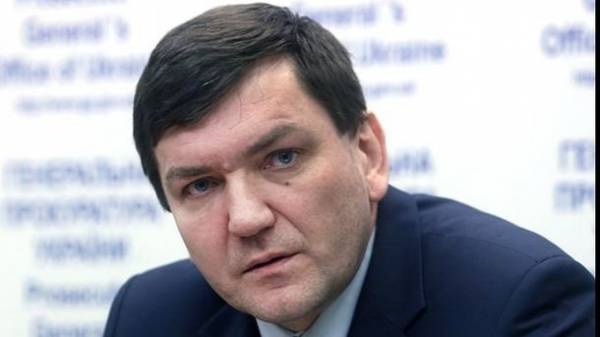 Chief military Prosecutor Anatoly Matios is not interested in the investigation of crimes against participants of revolution of dignity and prevents it. This was stated by the head of the Department of special investigations of the Prosecutor General Sergei Gorbatyuk, the TV channel “112 Ukraine” .

Mr. Yan said that he had repeatedly filed complaints to the Matios to the head of GPU, Yury Lutsenko.

“Matios probably wanted in the investigation of crimes against Euromaidan was a failure. But it’s not. The results have been quite significant, the work continues. And then they will results in bringing the perpetrators to justice. At the same time a consequence is constantly faced with obstacles in the investigation of these cases. Unfortunately, these preventing to come including from the leadership of the Prosecutor General, and in particular from Matios. In this regard, I have the attorney General filed a written complaint, including about the fact, what exactly are these disorders, but, unfortunately, no response”, he said.

Speaking about specific examples of violations, Sergey Gorbatyuk said: “the Transfer of economic Affairs. There was a meeting in which no discussion of economic Affairs did not happen, was drawn up. After that, the Protocol goes to the Matios, it made obviously inveracious data that the consequence of inefficient and things get. This is one case. Next. The investigation of the murders of 19 February in Kiev. Within 2.5 years the military Prosecutor investigated because of suspected SBU. At the same time the results of the investigation came to the conclusion that the “protesters” themselves have shot. In this regard, our Department is forced to pick up production and start from scratch the investigation in 2.5 years, and spend the time the same States, to provide additional investigators that we’re hurting”.

He added that reports about the actions of Matios already written about two dozen, response no. According to the head of the Department of the GPU, Anatoly Matios his criticism of trying to cover up the lack of results in the investigation of resonant crimes in the military sphere.

Also commenting on criticism Matios on the results at the “Euromaidan” Mr. Yan said: “in fact, Matios accused the Prosecutor of lying. Because on Wednesday, the Prosecutor General in the Verkhovna Rada reported that in the investigation of the Maidan is quite weighty and has a Saturday Motes States that turns out to be a failure. I think Matios telling the truth”.

Speaking about the results of the Department, the head of Department emphasized that to date, cases of crimes against Euromaidan reported about suspicion more than 350 persons in respect of 230 sent indictments to the court and there are already more than 35 sentences.