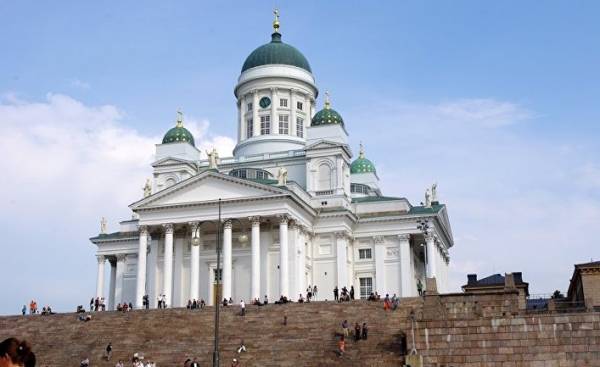 In public debates concerning dual citizenship, recently sounds like a lot of different opinions and arguments. One of the arguments has caused me a strange feeling, similar to an unpleasant Association, otsloivshiesya tightly in the layers of the scored impressions of the subconscious.

I’ve been trying to understand and compare. Almost in desperation I suddenly remembered, suddenly found himself almost forsaken me the situation from a rather distant past.

Once I often called to speak on various topics related to Russian language and culture in Finland.

I will always remember the performance in a single small town in Eastern Finland, which, in the image many similar places, for most of the year lived his life half-asleep. By the summer he was coming out of winter hibernation and during the three summer months was bubbling streams summer festivals.

The performance was organized by several local associations and the name it was a proud and laconic: “About the Russian culture”. I confess, it brought me delight, but to change something was already late.

Having dealt with the historical-cultural aspects, we gradually moved on to more pressing issues. Fearing to position himself as an expert, I offered just to talk about themselves, and then go to questions and answers.

The first question was something like: “it Must have been difficult in Finland because of the aggressive manifestations of Russophobia?”

I had to disappoint who asked, saying that overall I have been very lucky in terms of communication, because the fact of my Russian origin, as a rule, caused people only sincere interest. Then the view turned 180 degrees and asked me about what I think about the Finns and Finland in Russia.

The Finns clearly surprised that Russian is not especially filling your head with thoughts of Finland.

And suddenly the next question brought me a stupor comparable to freeze the hard drive of the computer.

An elderly man, still listening to me with rapt attention, suddenly said, “Tell me, and you are proud that you are Russian, or rather, ashamed of it?” The hard drive in my head tried to regroup and then bainul with a characteristic Bang. Had to manual shut down the computer: I was asked to make a five-minute break.

After the break, I vaguely mumbled that try less to be proud of. And if we are proud, any personal achievements. Ashamed I committed my mistakes. But the fact that I was born where you were born, and speak the language spoken in my head does not fit with any concept of pride or with the concept of shame.

Reminded me about Russian classics, athletes, and other figures supposedly worthy of my pride. I again got out, saying he did not see them a direct link to my personal achievements and mistakes.

I quickly tried to finish, as my condition was similar to the autopilot. I harshly knocked out of the comfort zone, whacking the back of the head with my own weapon!

About another monastery, and its Charter

Despite the remaining “sediment”, this experience I more than once came in handy, and in the most unexpected situations. But most importantly — he taught me to distinguish between the principles of mental orientation, without understanding that existence is possible only in conditions of “his clan”.

So loved and hated by many Finnish phrase “Maassa maan tavalla (tai maasta pois)” freely translated similar to the familiar proverb about that in another monastery do not go with their Charter. However, on closer examination it becomes clear that the Finnish word “tavat” is not a Statute, but rather, customs and behavioural habits. Thus, the literal translation of this phrase would be: “Live in the country according to its customs.” And here we are approaching the very principles of the mental orientation, as they define it habits and customs.

Pride in their culture — it is also a location on the mental map. To someone it may be alien, but, nevertheless, for the majority of this position is one of the most important in determining national identity. “Our won”, “Our culture — a great culture”, “I’m proud that I’m from Finland (Russian, American, etc.)”. The list is almost endless. The Germans, perhaps one of the few Nations in the mental map which tightly programmed sense of shame in its history…

I would citizens went…

And here in Finland are talking about the potential dangers of dual citizenship. Among the risk factors listed a lot of things: and influence attempts on the part of one of the States, and not recognizing one of them the dual citizenship. However, more than the rest of my attention was drawn to the idea of allegedly forked loyalty of citizens with two passports that can pose a serious risk, for example if there is a clear political conflict between the two countries. Something in the wording caused a movement in the hard drive of my brain, vaguely reminding me of the sensations from the distant past.

And I’m seriously thinking about loyalty.

On the one hand, the idea is clear: in case of conflict, occupying a strategically important public office dual citizen cannot sit on two chairs at once, like chairs, these will be separated into different angles. Without going into the likelihood of such a situation, I am willing to understand the logic of offering to be determined in advance, ahead of a possible occurrence of an unpleasant situation. The logical contradiction here is not, as in this case, the government is actually the employer, and the employer has every reason to count on the loyalty of its employees.

However, I was not left with the annoying feeling of a certain contradictions of the concepts of citizenship and loyalty. It’s like having a different citizenship, a person sells himself to the state.

And then, lo and behold, the pieces of the puzzle came together! I remembered about national pride. “One for all…” “Motherland will not forget you!”.

Yes, no doubt: people are proud of their nationality (in this way — citizenship, that in itself is not the same thing) gets into a very unpleasant situation, being forced to choose. On the other hand, this man is hardly in this situation will ever be. With high probability to choose it will be simply not what, as dual citizenship for such a citizen is in itself unacceptable, because of his extreme anti-patriotism.

What motivates us to get a second citizenship? Let’s be honest at least with ourselves: in most cases, the true causes — not in national pride. I don’t think many people naively believe that, by becoming citizens of Finland they are like magic, suddenly turned into Finns. I will allow myself the audacity to suggest that the true reasons are very prosaic and far from the pathos of national patriotism: it is simply convenient. Convenient both from the point of view frequently traveling to Russia man, and from the point of view of a traveler at all.

However, in fairness it should be noted that for a second citizenship always feel more responsibility, because it was sought consciously, whereas the first was given at birth.

Recently reading a novel by a modern Finnish writer Heidi Kangas “Dora, Dora” I came across the idea that any wording conveys my attitude to the concept of loyalty, especially the loyalty of the government.

The novel tells the story of a Christmas trip to Northern Lapland, which takes in the end of the Second World war, the German armaments Minister albert Shper. Being the favourite of Hitler and received valuing the privileges of the Shper is in a state of deep depression after the loss of Stalingrad, Hitler turned away from his favorite and deprived of his attention. Fallen out of favor former favorite trying to understand what happened with him. And here, in my opinion, one of the main ideas of the novel, a kind of enlightenment:

Loyalty is always a little blind, it has a pinch of fanaticism, and it can be dangerous, most dangerous. It completely shifts the responsibility to one whom we are loyal.

So I will conclude by calling: citizens (single and double), beware!