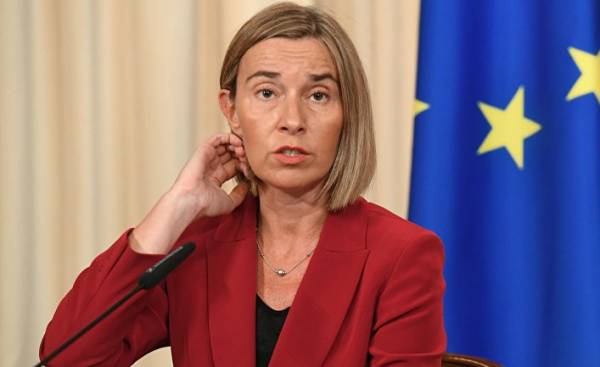 Transatlantic relations had cooled after the visit of the American President Donald trump in Europe, which took place last week and was marked by a number of blunders. But behind closed doors, friction began long ago, and one of the reasons for this was the disrespect that trump has shown in relation to a senior representative of the European Union.

The Secretary’s office Rex Tillerson after the April visit to Russia, refused a telephone conversation with the foreign Minister of the EU Federica Mogherini. It is reported by several people familiar with the incident sources. The publication Foreign Policy, said that the office Tillerson rejected the request Mogherini on the telephone conversation and turned the case officials of lower rank. This move was made in conditions of already tense relations between the US and the EU under the administration of a trump, and led Mogherini in a rage. Mired in scandals the White house is still trying to recover from the investigation of possible associations of pre-election headquarters of the trump with the Kremlin.

Camera Mogherini appealed to the Department Tillerson, asking about a telephone conversation after his visit to Moscow, which took place on 11-12 April and received wide publicity in the media. During this visit, the Secretary met with Russian President Vladimir Putin and foreign Minister Sergei Lavrov. On April 24 a meeting was scheduled Mogherini and Lavrov in Moscow. The allies are expected to receive a brief report on the meeting directly from Tillerson, but he, like FP said several sources, was not available and could not satisfy the request of Mogherini

“It’s really brought her out of herself,” said one of the sources.

“This is a serious mistake, told FP another source close to the foreign Minister of the EU. — Mogherini not used to be treated like that.”

According to sources, the Agency Tillerson suggested meeting with Brian Hook (Brian Hook), the Director for political planning. Hook enjoyed considerable influence in the state Department, but his position in the diplomatic hierarchy a few steps below the Secretary of state.

According to the official, the conversation between Mogherini and the Hook did not take place. “So the incident itself is not,” added the official.

Advisor Tillerson Hammond did not deny the incident, but told FP that Mogherini “was proposed the most appropriate in the circumstances.”

The spokesman pointed to regular contact Tillerson and Mogherini in the recent past, including their participation in the meeting of the leaders of the US and the EU during a visit by trump in Brussels on 25 may and several meetings Mogherini and Vice-President Mike Pence in recent months. “Our constant involvement in high-level dialogue emphasizes the United States commitment to transatlantic relations,” the official said.

Officials and former officials who have information about this incident, saying that it could be a simple hole in the schedule: probably team Mogherini is not adequately briefed the state Department about their plans. But this kind of misunderstanding have become too common in the state experiencing a shortage of personnel (Tillerson similarly humiliated the head of the African Union, admitting last month a serious mistake in planning).

Although the new administration began work a few months ago, the White house trump has not appointed officials in a number of positions of middle managers, whose duties include maintaining relations with Europe. So, still not appointed assistant Secretary of state for European Affairs, the U.S. permanent representative to NATO and the EU.

This vacuum can lead to the disruption of routine diplomatic contacts, such as phone calls and a final meeting with senior officials of the allied States. “The inability to deal with the meetings was the system, — said a source close to Mogherini. — They have in the administration there is no one who could deal with these issues”.

Awkwardness happened at a time when the administration is confronted trump with Europe on issues such as trade and defense spending. “This administration is very skeptical of multilateral institutions like the European Union,” said Anthony Gardner, who until January was the permanent representative of the USA to the EU. He refers to skeptics of the closest circle of advisors and friends of trump, including strategist Stephen Bannon and “architect” of “Breccia” Nigel Farage.

But, given the prevailing in the administration chaos, chaotic messaging and vacant administrative positions, European officials are not even sure, how can we explain such acts of indiscretion.

“Europeans wonder: on a direct hit doesn’t seem like, right? What it says about the lack of staff, about his incompetence? Or is it done deliberately?” — asks the FP one former senior us official familiar with the situation.

Former officials say such mistakes happen often in the first months of the new administration — as well as tensions between the new administration and its allies in the EU (even under former President Barack Obama). But trump took a pretty aggressive tone in dealing with the EU: in his Twitter he publicly incite controversy surrounding trade with Germany, the most influential member of the EU. Candidate for the position of Chancellor from the left centrists Martin Schulz repelled the attacks of trump on Tuesday, calling him a “destroyer of all Western values.”

Last week, trump made a trip to Europe that proved to be particularly rich in an awkward situation, including the ridiculous and much criticized visit to the headquarters of NATO and a meeting with senior officials of the EU, after which the head of the European Council, Donald Tusk, has taken the unusual step of publicly acknowledged that he could not find with trump common language in matters concerning Russia.

Current and former officials contacted FP and they say that regardless of one’s views of the EU, Mogherini the new administration could become a valuable ally of the US in Brussels, if she was treated as an equal. “I believe that it is one of the most effective team members [the European Commission],” said Gardner.

Many officials praised Mogherini for her accomplishments on issues such as the deal with Iran and the development of the global strategy for the EU.

“I’ve seen her up close. She was always well prepared. Of course, she enjoyed the confidence and respect of the Secretary [John] Kerry,” said Gardner FP, mentioning former US Secretary of state. Kerry worked with Mogherini hand in hand on issues such as the Iran deal, climate change and terrorism.

Given the multitude of threats facing the EU and the United States, we are talking about very important relationships. “Closer cooperation between the US and the EU can be useful in almost any type of threats,” said Jeremy Shapiro (Jeremy Shapiro), Director of research at the European Council on foreign relations. According to him, to develop a coherent foreign policy for the EU is difficult, given the various national priorities of each of the 28 countries in the bloc. This means that other European leaders may have more influence than Mogherini.

But experts believe that constant contact with the EU is the United States an inexpensive and extremely effective way to support the foreign policy of the EU. This work, which probably won’t scream the Newspapers, but it is critical for transatlantic security, to combat terrorism in Africa and stabilize the politically unstable Balkans.

“The United States and Europe share many common political issues on which they interact, consult and work together,” said Constanza, Stelzenmuller (Constanze Stelzenmüller) from the Brookings Institute.

“This is not a trifle, not a diplomatic show of force, she said. — We are talking about business and solving specific problems.”