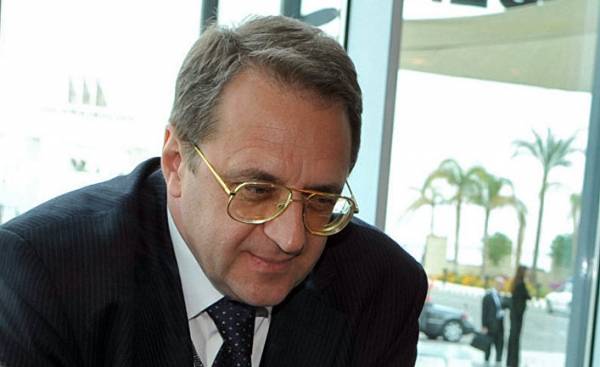 From the two Livy hear a signal, perhaps indicating political agreement without military intervention, a very important role in this process is played by Russia and Italy.

In Tripoli yesterday, 26 April, arrived the Deputy Minister of foreign Affairs of Russia Mikhail Bogdanov. Bogdanov is one of the best diplomats in the world in matters relating to Arab countries. He was Ambassador in Damascus, when Syria’s Assad rules a senior, he’s making all the meetings, where the propaganda of the General staff departs on the second plan there is a need to negotiate on specific topics. Bogdanov arrived in Tripoli to discuss the reactivation of earlier agreements with Muammar Gaddafi before the revolution of 2011, the opening of the Embassy in Tripoli and assistance in military training of new soldiers that will “serve the national unity government” — still, however, not existing. When Italy reopened its Embassy in Tripoli, it seemed premature because the authorities could not control even half of the country, but now that Russia put forward the proposal suggests that the Italian government is not the only one that seeks to resolve the relationship with both parties, divided between Libya. The arrival Bogdanov serves as a kind of refutation of the fears that Russia is committed to a military solution to the Libyan conflict, at least at the moment. Moscow occupies a position similar to the position of Italy: mediation until recently. Italian Prime Minister, Paolo Gentiloni (Paolo Gentiloni), who was then the Minister of foreign Affairs, closely followed the unfolding situation in Libya, with the establishment of the government Fayeza Zarraga in Tripoli (claim about another trip abroad, this time to Washington to meet with U.S. President Donald trump, who not said a word about Libya).

Until last month it seemed that the situation in Libya is on track: the East against the West, Benghazi against Tripoli, warlord Khalifa Haftar, supported by Moscow, participated in a symbolic ceremony on Board the Russian aircraft carrier, stood in January at sea off the Libyan shores, against Fiesa Zarraga, interim head of the interim government in Tripoli, theoretically supported by the UN, America and Italy, but in practice almost does not allow much power and influence. All wondered what will happen next (and this issue remains on the agenda): Zarraga chase his Libyan enemies from Tripoli, acting in concert with the Haftarot, and he will have to return to the ship from which he so proudly and boldly went in March 2016 and which is still waiting in the port of Tripoli? Or General Haftar against the capital and take her under his control like he did last year with the oil terminal in the Gulf of Sidra? At the moment the most probable is the third option. On Friday, April 21, Rome was a very peaceful meeting of the Chairman of the Supreme state Council of Tripoli, Abdulrahman Sverke and President of the chamber of representatives of the Tobruk Agila Saleh, that is, the leaders of two competing parliaments. Theoretically, this was supposed to be a confidential meeting that precedes other, more difficult, those that addressed the role of Haftarot in a unified Libya (if one appears). According to the Minister of foreign Affairs of Italy Angelino Alfano (Angelino Alfano) and Ambassador in Tripoli, Giuseppe Perrone (Perrone Giuseppe), it was a delicate diplomatic operation that led to the result, appeared better than expected, but the news these days was entirely dedicated to the detainee’s case in Turkey, the Italian journalist Gabriele Del Grande (Gabriele Del Grande). Italy and Russia watch each other’s actions in Libya with growing confidence that the administration of the trump voluntarily decided not to have the Libyan issue. Merkel responded to the request of the head of the Pentagon