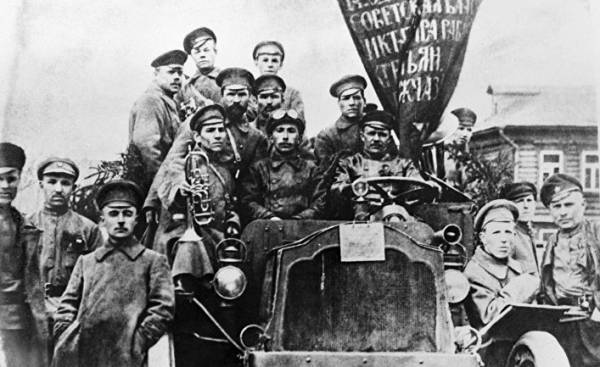 Recently, we mostly read about the anniversaries and scandal. This year bookstores captured a cohort of new books dedicated to the centenary of the Russian revolution. As for scandals, no day goes by without a disturbing, provocative insults, discrediting the administration of the trump.

Can new books about the Bolshevik revolution help us to understand the surrounding of the President trump the scandals associated with Russia? Amazing but true.

Many modern creations represent the revolution of 1917 as a large-scale German conspiracy. This view is especially popular now in Russia, where the word “revolution” is considered a dirty word. People are rarely satisfied with the explanation of the revolutions of ordinary political logic. Historical events are interpreted either as inevitable as the creation of God, or as the intervention of some external force. And when communism came to an end, a popular version of the history of the Russian revolution was not focused on the revolt of the masses, and stories of espionage, showing that the Germans, as Churchill put it, “brought Lenin in an armored car, like a plague Bacillus from Switzerland into Russia”.

Many see the victory trump almost exclusively the result of a Russian conspiracy, that if we understand why the Germans helped the Bolsheviks in 1917 and what happened next, we can better understand why Moscow would want to help Trump in the presidential campaign of 2016 and what we can expect next.

The analogy with 1917 suggests that Russia intervened in American politics because Hillary Clinton, whom she hated, and not because of Donald trump, which she liked. Of course, the Kaiser’s Germany harbored no sympathy for the revolutionary ideas of Vladimir Lenin. If the rebel Bolshevik was German, the authorities would put him in jail. But Lenin was Russian, and the German leadership believed that revolution in Russia will go to Germany in the war.

We can assume that the main goal of Moscow in 2016 was the creation of chaos. Unreasonable emphasis on ideological or any other ties between the Kremlin and American President would impose on us.

The history of Russia also tells us that this is aimed at a revolution of politics, as Lenin, the real enemy was inside Russia. Just as Germany saw in the Bolsheviks the tool to achieve their own military objectives, Lenin believed Germany tool to implement their revolution. Probably something similar can be said about Donald trump. It is unlikely that the President personally engaged in the conspiracy with the Russians, but he probably wouldn’t mind if other people used the support of Russia for his victory. The only priority of Mr. trump in addition to the slogan “America first” — a “election victory”.

Therefore, I believe that contrary to the fears of many critics of trump, even if the President and his campaign team, knowingly or unknowingly cooperated with Moscow during the elections, this does not mean that the new administration would be friendly to treat Russia, or be under its control. Among other things, to Russia was controlled by trump, the President should have some degree of self-control, and is not given to him. It may sound paradoxical, but in advance of Russia’s intervention in the American elections in favor of trump only reduces the likelihood of cooperation between Washington and Moscow. Concerns of the White house related to the fact that he was allegedly too soft responds to Moscow’s actions, reduce the likelihood of cooperation with Russia. It may be the hallmark of the foreign policy of the administration trump.

Democrats can also extract their morals from the lesson of 1917 and forget their dreams of impeachment: the identification of alleged links of Mr trump with Russia automatically entail the loss of the President’s legitimacy. The story of the arrival of Lenin to power after traveling in an armored freight train was well known to the Russian public — even the Provisional government ordered to issue a warrant for his arrest — but it was not enough to diminish its role and the importance of the revolution in the view of his supporters. In the atmosphere of radical political split of the society trusts the leaders not on the basis of their personality, but on the basis of who are their enemies. In the view of many Republicans, President trump may not have the appropriate character, but he has the right enemies.

The story of 1917 can be instructive for the Kremlin of President Vladimir Putin. Strategy of Germany, which consisted in helping the revolutionary forces in Russia for the sake of the German geopolitical goals, had a sad end because of a revolution Russia ceased to be an active participant of the First world war, but the revolutionary fever spread throughout Europe that provoked a civil war in Germany. Russia of Mr. Putin faces the same danger. Recently published Pro-Kremlin research centre on the technological growth of populism suggests that the populist wave that swept over the Western democracies could soon reach Russia, becoming a serious threat to the political structure of the country in the next election cycle.

The irony of the situation is that one hundred years after the Bolshevik revolution, Moscow risks repeating the same mistake made by Germany in 1917, arguing that the popular uprising may be a reliable tool for achieving geopolitical goals. The fact that Americans may lose sight of, is that the current revolution in Washington cannot be explained solely by the intervention of Russia. First and foremost this revolution was made in America.