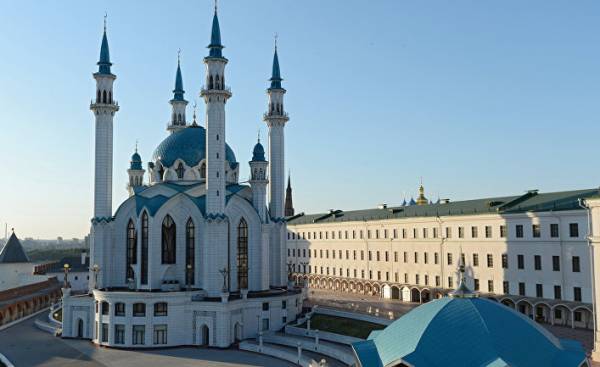 “I did tartare talking about?” We sometimes use this expression when someone doesn’t understand. Until last year I didn’t like the Tatar language actually sounds. Rhim itegez of Kazanga! Welcome to Kazan!

I woke up to the rain slapping at the Windows of the car. The little boy on the opposite shelf was up. I tried to break the silence and asked in broken Russian: “How tibia name?” The boy replied without hesitation: “I am Michael”. Encouraged by this success I continued the conversation: “Hello, Michael. I — Volodya. How many tebe, boy?” Michael proudly showed on his chest and said, “I was six. I’m not a boy, and the child”. I stopped short. Mother of Michael, smiling, watching the conversation from the top shelf. Seeing my doubt, she clearly explained to me that between a boy and a child there is no difference. Just Michael — a child, not a boy.

But by this time the train has gradually entered Kazan, the capital of the Republic of Tatarstan. Soon I saw a conspicuous slender minarets of the mosque Kul-Sharif. They rose high above the Kremlin of Kazan, and the whole mosque even in the rain looked impressive from the train. I realized that slowly but surely moving into the Islamic world. A world that will be part of my future path somewhere far into China. Strict and conservative Catholic Poland, I survived with a smile so we now are experiencing and Central Asian Islam and, perhaps, learn something new.

From the train I went straight to the Kremlin. I passed by the residence of the head of Tatarstan has left a Orthodox Cathedral of the Annunciation and went straight to the mosque Kul-Sharif. She is really beautiful. This is a genuine architectural masterpiece built from marble and granite. The roof forms a dome of turquoise color. The height of each minaret is 58 meters. Perhaps it will allow you to dry off soaked traveler. Backpack through, and here I am already inside. Smiling Tatar women in traditional robes and hats were sold in a small kiosk with Souvenirs and the Quran in different languages. In the glass kioske saddles Imam and quietly nacitava into the microphone of prayer. The main hall was closed. But you can use the adjacent ladder and inspect it with several galleries. All around still smelled like new. The mosque is decorated in white and blue tones. Above all dominated by the monumental crystal chandelier made in the Czech Republic. I was filled with pride for the Czech artwork that adorns the most beautiful Kazan Shrine.

In the middle of the XVI century this place was a thriving public education called the khanate of Kazan. But this did not suit the Russian Tsar Ivan the terrible. Several times he unsuccessfully tried to conquer the khanate and attach it to the Russian Kingdom. Only in 1552 Ivan the terrible defeated. In honor of it he ordered to build in Moscow so well-known today St. Basil’s Cathedral. But the Tatars of the consequences of the conquest were brutal. All the mosques were destroyed, and Islam — are prohibited. Many people were killed or expelled. Those who remained were forcibly converted to Christianity. Only under Catherine the great, about 200 years, Islam is again allowed. Only then, the Kazan Tatars were able to officially return to their faith. Vaguely it reminded me of our era after the battle of White mountain and the subsequent violent recatholization. It also meant the loss of religious freedom for a long time. Yes, the victorious rulers behave very similar.

Modern Kazan mosque Kul-Sharif was opened in 2005 to replace the former head of the mosque destroyed by Ivan the Terrible. Here citizens of Kazan and waited. It’s only about 453 years.

Today in Kazan’s mosque can be seen on almost every corner. Just next to my hotel had three. In addition to mosques there are in the city and Orthodox Church. Symbiosis there is clearly no bother.

I went down to the basement of the mosque Kul-Sharif, where the Museum of Islamic culture, and paid 200 rubles per ticket. Muslim woman-usher immediately realized that I was a foreigner. She took me by the arm and quickly had the exhibition devoted to the history of Kazan and development of Islam throughout the region. Everything is furnished very modern. In the middle of the hall, a huge interactive Quran. On the display you can print a Chapter, click on “play”, and for sound music and speech. Simultaneously displayed text in Arabic and, for example, in English.

On a nearby display in abbreviated form tells the biblical story from Adam and eve down to Muhammad. Scenes shot like in a movie, interspersed with text from selected sur. I was interested in Sura Maryam tells the story of the biblical Mary and her son Jesus. I briefly looked at a text written in Cyrillic. From the contents I understand that Muslims revere the immaculate conception of the virgin Mary. Even before I learned that in Islam Jesus is one of the most important figures of the prophet, which, however, did not become God, as in Christianity. But little did I know that in Islam Jesus is revered as the son born from the Union of God and Mary. I was a little surprised, but after all I travel.

Well, I am Czech and atheist can look at these things from a distance. I felt sorry for Joseph. None of the faiths does not recognize his father glorified the son.

Kazan — a city located at the confluence of the Volga and Kazanka related to beautiful Russian cities. Tatarstan is the richest entity in the Russian Federation. It is headed by the President and the government. The legislative power belongs to the Tatar Parliament. A curious fact: Tatarstan never signed the Federal Treaty of accession to the Russian Federation. That is, theoretically it is an independent state… there is oil and industry. In the nearby town of Naberezhnye Chelny produced well-known on the Dakar the KAMAZ trucks. Maybe next time Tatra them “I will.”

The Kazan Kremlin is a historic complex, surrounded by high walls. It is listed as a UNESCO world heritage site. The Kul Sharif mosque is catchy dominant of the Kremlin.

The Tatar language belongs to the Turkic group and the related Turkish. In addition to the Tatar language is official and Russian. Good thing because otherwise I wouldn’t read anything here. Tatar and even the Cyrillic alphabet…

Most Tatars follow Sunni Islam and the Russian minority is Orthodox Christianity. But I would say that a significant part of both ethnic groups about his faith too zealously.

And here is how Affairs with “Tartar sauce” and steak Tartar, I forgot to ask.