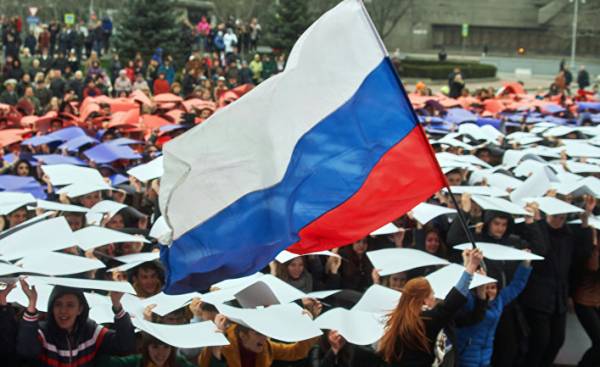 The Prosecutor’s office of Autonomous Republic of Crimea has opened a criminal case against Kremlin-controlled Crimean officials on the fact of waging a hybrid war against Ukraine. Special attention to Ukrainian law enforcement agencies give the facts forming the population of the Peninsula, including through the media, the hatred of the peoples of Ukraine. In SBU the case has been called unprecedented because information component of the war of Russia against Ukraine for the first time will receive a legal assessment.

Who and how to engage in information attacks — this morning on Radio “Crimea.Reality” we speak to the head of Department of Prosecutor’s office of Crimea Alexander Darakchi, President of the Academy of Ukrainian press Valeriy Ivanov and Director of the Centre for social relations Yevgeny Magda.

“The Crimea.Reality”: Alexander, is it possible to have to name some names? Is there a suspect list?

Alexander Darakchi: unfortunately, at this stage, it will be disclosure of investigative activities, so to name specific names yet.

— Then tell us in more detail what they suspected?

Alexander Darakchi: At the moment of suspects in criminal proceedings no. The case is being investigated in fact a hybrid war, the investigation focuses on the informational component.

— Can there be suspects not only individuals, but also legal, for example, companies?

Alexander Darakchi: We will attract a natural person who is a suspect. But that individual may be an official law firm. It can be the Director, the founder or owner.

— Without naming names — who could be a suspect? For example, media organisations, television and radio stations, Internet sites, news agencies?

Alexander Darakchi: You have described an exhaustive list of possible suspects, namely, they can be their officials. Now the investigating authorities and prosecutors do focus on these subjects.

— Another important point: when and who will make the decision in this case?

Alexander Darakchi: Given the specificity of the work of prosecutors of the Autonomous Republic of Crimea, we appeal to appellate court of Kiev to determine jurisdiction. In turn, the Kyiv court of appeals determines jurisdiction on areas of the city, as the deployment of the Crimean Prosecutor’s office is here. That is, it will happen in one of the courts of Kiev.

— The punishment is supposed?

— That is about the conditional terms of the question?

Alexander Darakchi: too early to tell, but I think if there were convincing evidence for the court — it will be a real punishment.

— Can social networks individuals to be proof of guilt?

Alexander Darakchi: On this issue, the investigators carry out the examination. In this case, the material will be sent to the expert institution which will be able to clearly answer whether the statements in the social networks aimed at violating the territorial integrity of Ukraine. If those opinions are an expert, it will be undeniable proof.

— What is the period covering the investigation?

Alexander Darakchi: We consider now the events before the time of the annexation, until 20 February 2014 and after. In General, it is the period from late 2013 to today.

The investigation applies only to Russian companies? Or covered and Ukrainian?

Alexander Darakchi: We have to be objective, therefore, will be considered and subjects in Ukrainian.

— Valery, in your opinion, how significant was the role of Russian media in what happened in 2014?

Valery Ivanov: of Course, the role was. Moreover, the effect continues — not only for the people of Crimea, but also to the residents (continental — CU) of Ukraine and residents of any country in the world. Similarly, as is the influence of European and American media.

— Do you think if the situation did not escalate, there would be those events in the Crimea or not?

Valery Ivanov: a simple answer to this question, I can’t because Pro-Russian sentiment in the Crimea was the 91st of the year and even before that. Unfortunately, this is a huge fault of the Ukrainian authorities she did not fully Ukrainian Crimea. Look at even the electoral choice of the Crimea and Donbass — it is always dramatically different from the choice the rest of Ukraine. The Ukrainian language is, of course, you shouldn’t intrude too in these Russian-speaking regions, but he should have been promoted. But it was only in words not in deeds.

— In your opinion, the Ukrainian court will go to making real sentences and executions?

Valery Ivanov: it’s too vague wording. “The formation of the Crimean hatred of the peoples of Ukraine” and the Crimean people have not the people of Ukraine? How to prove that the material forms a position? But overall, it is clear that the role and influence was, therefore, the Ukrainian court, in principle, can do it.

— Evgeny, what do You think will be the result of the investigation, which is conducted by the Prosecutor’s office of Crimea?

Eugene Magda: I think there will be legal consequences. Although we are quite skeptical about the activity of law enforcement bodies in Ukraine, but despite this, I believe that investigation is necessary in order for a judgment or at least the trial set a precedent that will be able to use our European partners. Of course, to talk about exactly what we can not, as well as to predict the court’s decision. But what is the role of media in the hybrid aggression is quite high, almost an axiom.

— How to prove that a particular publication led to the annexation?

Eugene Magda: I think there are enough of media lawyers who can do it. Besides, we are talking about the balance of opinions that have been covered in the Crimea and in the Donbas within a certain time. I think, to find among them those that called for national hatred and disconnection of Crimea, is also possible.