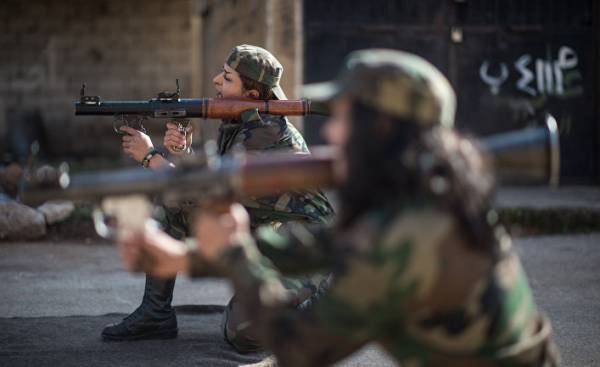 When we hear about women in the military have something in our mind a lot of questions: why they chose this profession which is considered male; what experiences have they had in possession of weapons and conduct of hostilities?

Earlier women were not allowed to participate in political and military activities, but, despite the constitutional prohibitions and social traditions they joined the women’s army. Historians recall that during the civil war in the United States of America (1861-1865), participating women were from 400 to 750. They were posing as men. The only way they could fight in the war, but some of them were discovered and imprisoned.

Recently in Western countries, the usual thing is to set the army not only men but also women. Women undergo full and comprehensive training in order to become a professional military and be competent in the conduct of hostilities.

Such an approach is alien to the Arab world, preserving the traditional image of women. However, despite this, some Arab States allowed their women to become soldiers and to perform their duties to protect the homeland.

Women were involved in the bloody wars for love of country and faith in their cause; some of them remain close to their companions or husbands and others because of the financial reward which you receive from service in the army.

Sarah Edmonds Silla escaped from Canada to the United States at the age of fifteen years, refusing to enter into a marriage of convenience. For some time she traveled, and then he earned on life that sold the Bible. After she decided to disguise as a man to join the us army.

After joining the ranks of the American soldiers, she participated in many battles and military operations: spying on the enemy and transferred wounded soldiers to hospitals. Sarah fled from the army after he contracted malaria, not wanting to reveal his true identity. Because of his desertion she was sentenced to court. She had to abandon her male masquerade, and since it was impossible to find in the female form, she began to work as a nurse. After the war, Sarah wrote the book “Nurse and spy in the Union army”.

Sarah talked about her life under the guise of Franklin flint Thompson: “I can only thank God for something that was free, could go forward, to do my job and didn’t have to sit at home and cry.”

The charge of desertion was dismissed, and Sarah was able to get an official honorable discharge. She was also was the only female member of the organization of veterans of the civil war, which had in its ranks only men.

Loretta Velazquez, disguised as a man for her lover

Loretta received the rank of Lieutenant after he decided to join the army to stay with her lover, a military officer of the United States. She glued on a fake mustache and beard, reincarnated as Lieutenant Harry Buford. Loretta began to spy on the enemy, and during one of the assignments was exposed and separated from the army as punishment.

Velasquez moved to another state in the US, where once again successfully disguised as a man joined the army. However, after getting injured, a military doctor forbade her to take part in the fighting. Thus ended the adventure Velasquez in the army.

In the Eastern part of the world women are most likely to care for the wounded, was responsible for administration or correspondence, but in recent years some Arab countries have allowed their women to undergo military training to serve in the army, to fight on the battlefield and fight the enemies of the Motherland equally with men.

In 1962, after the founding of the College of nursing Princess Muna’s first graduate to serve in the Management of the Royal medical services. Eight recruits of the women completed the necessary training to obtain the rank of second Lieutenant in the Department. And since then, many women began to join the military service as officers, soldiers, intelligence members and the Royal guard. 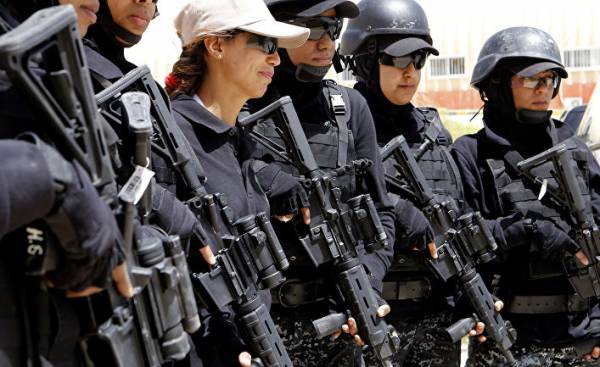 In order for Jordanian women participated in the military life of the country, established the Office of women’s Affairs in the armed forces. Thus, supported the rights of women serving in the armed forces. The emphasis is on equality between men and women, as well as equality in their rights and duties. All this helps to create a certain atmosphere for receiving professional military skills.

It is interesting that the Jordanian female soldiers had fought with the Taliban in Afghanistan in 2005. And it was their first mission abroad. Jordanian Colonel Aref AZ-Zein said, “We’re trying to tell them about moderate Islam to keep them away from extremist ideas. And as some Afghan women are not talking with the soldiers-men, we chose women to contact them. This is the first appointment of Jordanian women outside the Hashemite Kingdom”.

The Minister of defense of Tunisia Farhat Horchani said that the time has come for the integration of Tunisian women in the military, especially at this time when Tunisia is going through difficult times and there are serious problems due to terrorists and their attacks. And since the Tunisian Constitution says that military service is the duty of every citizen, this law will apply to everyone, whether male or female. 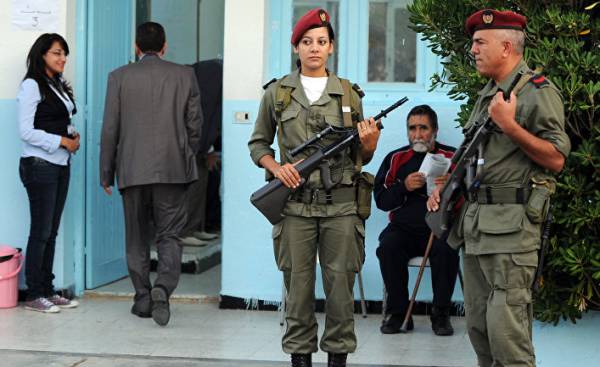 The most famous Tunisian women are military pilots Ad-Dar and the Alif, which is among the 40 women pilots of the Tunisian air force.

Lieutenant Alif is a pilot in the Tunisian army. Its task is to provide air support and to be in a constant state of readiness to take off on the orders of the command center. On the plane, you must have weapons, ammunition and equipment, and first aid to the wounded in any emergency.

The Alif and Al-Dar say, “we Have no advantages over other people who serve in the armed forces, because we serve for the benefit of one homeland”.

Kuwaiti women allowed to work in the police and to be the officers, despite the different views in society concerning this kind of activities for women.

In March last year in Kuwait was announced compulsory military service for all citizens, regardless of gender. After the suspension of the law on compulsory conscription, which is not implemented for 16 years, this decision caused a great resonance in Kuwait, known for its traditional worldview and customs. However, Kuwaiti women approve of and support this decision of the government, which treats them as citizens who are able to assume obligations and responsibility before the Motherland.

Professor of pedagogy and psychology at the University of Kuwait Dr. al-Kharafi said that the Kuwaiti women are no different from any other woman in the world. However, tradition and strict environment determines their behavior, thinking and way of life.

It should be noted that Kuwait is beginning to recognize the danger to whole world due to indiscriminate terrorist attacks. And that is why Kuwait wants to be ready to repel any threats to their safety and the safety of its citizens.

Nada al-Ajmi, who served in the Kuwaiti police, said that the opportunity for Kuwaiti women to serve in the army shows the progress taking place in Kuwaiti society in which women have the opportunity to demonstrate their skills in this area.

After the establishment of the military school of Hawly bint al-Azwari in the UAE for the girls they were open all the way. Mariam al Mansouri took the opportunity to take part of “operation Resolute storm” in Yemen. The purpose of this operation was the destruction of the positions of the terrorist organization ISIS (banned in Russia — approx. ed.). Al Mansouri was the first Arab woman to receive the rank of major of the air force, in UAE. 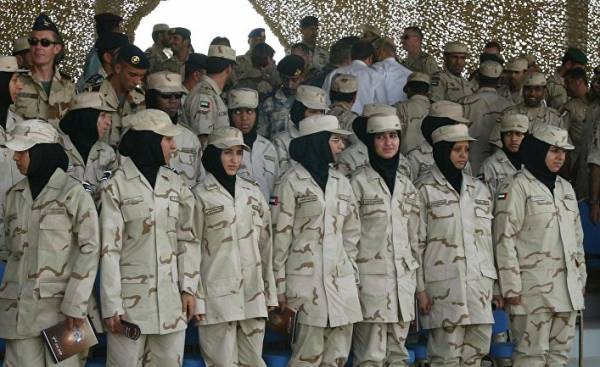 Sheikh Zayed bin Sultan al Nahyan issued a law that allows girls UAE in age from 18 to 30 years to serve in the army for nine months with the consent of their parents.

After al Mansouri decided to join the armed forces of the UAE as a pilot, she is constantly faced with difficulties and challenges, despite the support of his family. However, al Mansouri did not doubt its ability to compete in this field with men and be a professional in order to manage the F-16 Block 60.

Al Mansouri said that the difference between men and women there. All training is carried out at a high professional level. Any differences disappear when you start work no exceptions for women no.

Furthermore, al Mansouri added: “I feel great pride and responsibility for their work in this area. Especially because of his choice, which is associated with a deep passion to fly fighter”.

Al Mansouri received the award for his achievements from the ruler of Dubai Sheikh Mohammed bin Rashid al Maktoum, which is a matter of great pride for the UAE.

Women have already proved themselves in the military sphere, which for decades monopolized by men. It is expected that the number of women in the military will increase not only achieved success, but also because of the alarming political situation in the world that needs more defenders.