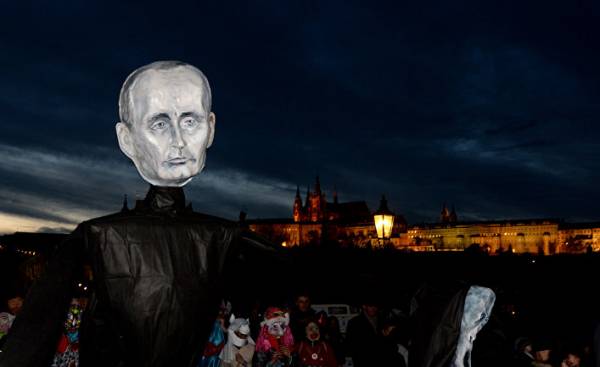 For Russian spies Prague — an excellent place to live and create a base for further expansion. According to John R. Schindler, American expert in the security field, the center of the Kremlin’s espionage is the Russian Embassy in Prague. However, much more dangerous than the so-called illegals.

“They have the original documents, verifiable biography, because intelligence agencies devote a lot of time to create a credible legend. Such people are almost impossible to expose,” says a former analyst of the national security Agency USA and an expert on espionage and terrorism. Server HlídacíPes. org has interviewed John R. Schindler when he came to Prague for a summit on security Stratcom 2017.

John R. Schindler: In the information war that the Kremlin is now waging against the West, against the European Union, the Russian diplomacy plays a significant role. For example, the Russian Embassy in Prague: there is an incredibly large state. The number of employees (approximately 140) to the Embassy in the country with ten million inhabitants is too much. Of course, between Moscow and Prague is a historical connection, but still.

— What does this mean? Among diplomats there is a certain percentage of people in the Czech Republic under diplomatic cover, but they perform completely different tasks?

— It is generally estimated that in the Western embassies at least a third of diplomats — not diplomats, and intelligence officers. I’d say about 40%. They do intelligence. I have no doubt that the Czech counter-intelligence BIS, together with cooperating services is well aware of this and knows how to distinguish between diplomat and non-diplomat. By the way, intelligence also has its limitations, and need to know who is who. In the case of the Russian Embassy still difficult.

Because in fact all Russian diplomats, including the present one way or another engaged in espionage. Here is an example. I — Yuri, cultural attache, a cultural attache. But I know that if the work of meeting someone who may be interesting, for example, any analyst of one of the Czech political parties, it is part of my job is to go to residency and transfer contact information. In this spirit, special services at the Russian Embassy are working. Some “full time”, some — by half.

— Is it possible with this to do something? After all, there are diplomatic norms, agreements, treaties…

— Espionage is considered illegal activity in General around the world. Therefore, in all countries there are mechanisms to declare some persons persona non grata, violated diplomatic norms. Every diplomat needs to obtain host-country accreditation. If he’s not acting like a diplomat, as a spy, this country has a right to deport him. By the way, it has been several times in the Czech Republic. The problem is that, in return, sent diplomats from Moscow. And employees of the Czech Embassy in Moscow, less than spies at the Russian Embassy in Prague. But there are other methods to monitor these people to find out what interests them, with whom they meet, can complicate their lives… However, for the state is very expensive, if we are talking about surveillance 24 hours a day.

— Also, apparently, Russian intelligence is centered not only around the Embassy…

— Of course not. The biggest problem in this spy game are the so-called illegals. It employees of the Russian SVR and the GRU, which operate on the territory of the Czech Republic and other countries without diplomatic cover. They live here like ordinary people, often from third countries (not necessarily from Russia), for example: poles, Germans, you name it… they Have the original documents, verifiable biography, because intelligence agencies devote a lot of time to create a credible legend. Such people are almost impossible to expose. They do not rotate in the Embassy circles, not meet with Russian intelligence officers. In 2015 in new York illegal Evgeny Buryakov was discovered only due to the fact that you made a mistake and met with a CBP officer from the Russian Embassy in the United States. Last year he was sent to Russia. In the Czech Republic, which is close to Russia is quite a big Russian community, and so an illegal alien can get lost like a needle in a haystack.

The goal is to overthrow Putin is not worth it

— What do You think the Czech Republic is interesting?

— You are a member of the EU and NATO, and, in addition, there is a considerable part of the population sympathizes with Russia. In the Czech Republic are also strong Russian business and the tourism industry. We all know how that’s been for 90 years Russian love Karlovy vary. Therefore, in the Czech Republic, the Russian spies are easy to work with. Plays its role and attractiveness of Prague. On the other hand, a lot of talk about the Russian propaganda and information war, and, I think, the situation in the Czech Republic to the Russian security services becomes more complicated.

Nevertheless Prague plays the role of a kind of safe haven, a base for further expansion to the West?

— In Prague it is nice to live, although it is not Vienna. But Russian most attracted by the fact that the Czech Republic is a NATO member, but Austria is not. The goal is to penetrate the political and business structures, and, frankly, Russia has long been “mastered” Vienna, during the cold war, espionage and some structures have experienced it. Similarly, in the Czech Republic, Russia took advantage of the fact that after 1989 began forming a brand new intelligence structures. Came people who in 90-e years only gained experience, and Russian espionage had time to take root.

Part of the job of the embassies, these diplomats is to inform, send home information about events in the country. Do you think they convey, given the current information war, a reliable picture of what is happening in the country, in this case, the Czech Republic, or is deliberately misrepresenting events? For example, selective quoting of certain spokespersons or sources…

— I think that, rather, these people participate in the dissemination of false information. To do this, they have such official channels as Sputnik, the former “Voice of Russia”, as well as informal. Russia special presents of the EU and NATO. The European Union, it exposes the organization which is engulfed in chaos and decline, describes the ubiquitous refugees who commit crimes in Europe, especially given the situation in the Czech Republic, is a blatant lie. Russia sought to undermine the credibility of the EU. This is a political war. But it is important that Russia is not trying to create a new political situation, and uses the existing. The attacks on the EU are successful because soar antirussische mood. Plus a classic false news (fake news), although they may have a valid basis. For example, NATO exercises in Poland and the Baltic States. Teachings were small: only a few hundred soldiers and 87 tanks, and they were within a few hundred kilometers from the Russian border. But Russian media reported about 500 thousand soldiers and 870 tanks. Completely fictional information. But you are here in the Czech Republic, see these false news related to NATO, are used by the extremists of the left and right wing.

— You probably often hear in response that the promotion is not unidirectional, the information war is not only the Kremlin, but the West, the USA… How do you respond to that?

— Any government committed to present themselves in the best light. The European Union wants a positive image of the EU, NATO wants a positive image of NATO. The Czech Republic also wants to read only good news. If they are based on facts, why not — everything is fine. However, Russian propaganda is quite the opposite: it is based not on facts but on emotions and false news. The same applies to intelligence operations. And the Czech Republic, and the West generally too holds its special operation against Russia, and that’s fine. But it is not normal that the interference in the politics of other States in the presidential campaign, as it was in the US or in France. The Kremlin clearly supports the establishment in the Western States Pro-Moscow governments. We strive — for example, through nongovernmental organizations to support democracy and the rule of law in Russia. But to overthrow Putin we are not trying. In Germany, the coming parliamentary elections, and I’m sure they will be another test for the Russian influence and our ability to resist and adequate reaction.