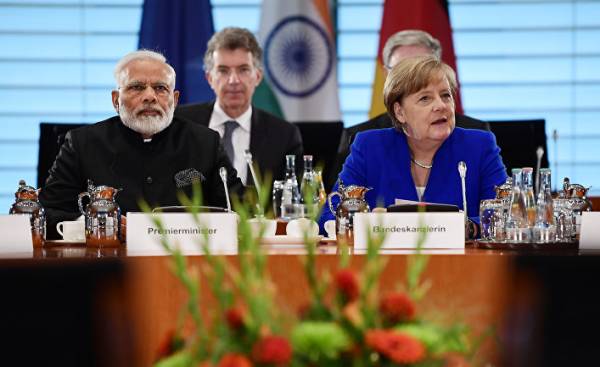 If Donald trump doesn’t do that anymore, you may want to invite Narendra modi? Can the Prime Minister of India to replace the evading of the course of the President of the United States in the round of G7? The press Secretary of the government Steffen Seibert (Steffen Seibert) repeatedly answered this question before modi’s visit to Berlin on Monday.

No, he didn’t hear anything about change of structure of the G7, Seibert responded to questions. And Yes, he really was present this weekend at the summit of seven leading Western countries (G7) in Taormina, Sicily. Therefore, further questions as to whether the world’s largest democracy to be included in the Council, perhaps even as a replacement for US, is meaningless.

Even if we have not planned any changes in the turbulent G7 summit on Monday, Prime Minister Narendra modi expected in Berlin with joy and hope. After a disappointing G7 summit, German Chancellor Angela Merkel (CDU) needs new allies to promote free trade, climate protection and a common policy towards refugees throughout the world.

She wants to use the upcoming summit of the twenty most important industrialized and emerging countries (G20) in early July in Hamburg, to ensure the global community’s commitment to these goals. Long-planned visit of Prime Minister of India fits well into the concept, as planned on Wednesday talks with the Prime Minister of China Li Keqiang.

Modi is considered to be a decisive reformer

India is one of the few countries with which Germany maintains close ties so that the Chancellor and her Cabinet regularly meet with partners to government consultations. Such talks took place two years ago, on Tuesday morning will be a meeting of the members of the Cabinet of two governments.

Despite the close relationship, the government considers modi a difficult partner in the negotiations. In the issue of climate protection for a long time India were not ready to sign an international obligation. In addition, for a long time, the country was skeptical about free markets and free trade.

Modi started to change this attitude. 66-year-old Prime Minister, who in 2014 the brand was unexpectedly elected Prime Minister, considered a strong reformer. Just before his arrival in Berlin, modi announced that India will do everything for the successful outcome of the G20 meeting. At the same time, he warned against xenophobia and increasing fragmentation. India is one of the “most open economies in the world”, the country would further integration in the global network. He expects the G20 to promote global growth and to improve coordination of national policies.

The German economy hopes for new impetus in trade

German Chancellor Angela Merkel met with the Prime Minister of India on Monday evening, first tete-a-tete over dinner in the castle of Meseberg. By words a press-the Secretary of Seibert, and G20, were also discussed “bilateral components.” “Specific examples” will be presented on Tuesday, after the actual governmental consultations, which will discuss future cooperation in Economics, science, technology and education.

The German economy also hopes for new impetus in trade, on the agenda of numerous meetings, organized a summit of India and Germany in the hotel “Adlon”, the speeches of Merkel and other high-level visitor from India.

Even before the arrival of the Prime Minister, the German business representatives demanded that the Indian government carried out further reforms and eliminated trade barriers. The lack of legal certainty, the difficult controls and the lack of infrastructure creates difficulties for companies wishing to invest in the country, said Hubert linhard, President of the Asia-Pacific Committee of German economy (APA). In particular, this applies to small and medium-sized companies. “With regard to tariffs and other barriers to trade, India should be more open to our companies to expand their participation in this country.”

The head of the APA linhard asked to renew negotiations on the free trade agreement between the European Union and India, an agreement “would be an important signal for investors”. India is an important market for the German economy. The country is considered one of the fastest growing emerging markets in 2017 is expected to 7.4 %. Last year the trade volume amounted to nearly EUR 17 billion. Of these, almost ten billion euros of German exports, and almost 13 billion euros in investment by German companies.

Expectations are high in India. Modi praised the Federal Republic, calling it a “major trading partner”, and important “partner in the field of investment and technology.” One particularly pleased with Merkel. At least until, India did not hear loud criticism because of the surplus of the trade balance.