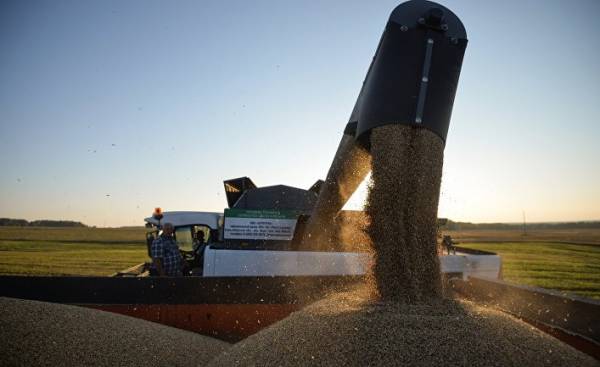 Russians have always been very inventive in respect to failures and defeats. In particular, during the cold war, the second place after the United States, as, for example, in sport achievements quite easily interpreted as a victory. Again the Russians were second, Americans — only the penultimate, rather evasively called it then.

But in one area the Russian had to cheat: after a decade of attempts to catch the opponent a huge Empire again overtook the United States in the export of wheat. Stronger while only the EU.

As for production, Russia continues to lag behind the EU, China and India, and remains only on the fourth place. Nevertheless, the peasants on the Volga river has reached a historic record, which received the appropriate media coverage. If you take all varieties of grain, Russia has collected an unprecedented rich crop. Lion’s share — more than two-thirds fell on the wheat. This Russia largely contributed to the fact that the price of wheat on the world market remains low. It dropped after five years ago has burst the bubble in commodity markets. Compared to those times, the price of corn fell by more than two times. In the near future changes are foreseen.

According to forecasts by the U.S. Department of agriculture, this year around the world is expected to decrease wheat production by 15 million tonnes to 738 million tons. It still remains the second largest value. The fact that Russia probably will reduce the amount of grain, will not change anything in that country in 2017/2018 could hope for following a high yielding season and may even surpass the EU as the largest exporter of wheat. The FAO forecast comes from the fact that the EU will remain ahead. No matter how it looks in the end result: for Russia, climbing to the top League not only brings moral satisfaction, bringing with it the growth of self-confidence, due to the fact that the structure of exports, dominated by oil, gas and weapons are now expanding, at least at the expense of agricultural production.

In the jubilee year — 100 years after the 1917 revolution and the Communist takeover — this climb is also symbolic: Russia as in tsarist times, has again become the world’s breadbasket.

The hundred years between years of the status of world granaries were marked by numerous disasters, the largest of which was a “famine.” Victims of this “murder by hunger”, this concept is translated into German, fell in 1932 and 1933 millions of people in the Ukrainian part of the Soviet Union. Was there a poor harvest caused by the then dictator Stalin deliberately, or it was the result of weather conditions and forced collectivization, to this day remains a contentious political issue. The fact that forced collectivization, namely the consolidation of individual farms into the state structure of large enterprises in the Soviet Union led to a reduction in acreage and yield.

Only under the rule of Vladimir Putin, the purchase of farmland by individuals were again legally permitted. The result was buying magnates vast areas of arable lands along the Volga and in the southern Russian black earth region. One of the largest among them is the current Minister of agriculture Alexander Tkachev. “Wheat is not less profitable than oil,” he recently said in an interview. In fact, investment in the agricultural sector have become good business in Russia. This resulted in an embargo on the import of agricultural products, which Putin has imposed in response to Western economic sanctions imposed in 2014.

While the overall state of the economy in 2015 and 2016 declined, agricultural production grew by 2.6 to 4.8%. An important contribution was made by a sharp drop in the ruble due to lower oil prices since mid-2014. The government’s aim is that within a maximum of seven years to become fully independent from food imports. This is the main reason that Russia is enormous subsidizes this sector.

Russia is trying to bring your business to new markets, such as Nigeria, Bangladesh and Indonesia. In April, for the first time by land wheat was exported to China. It is significant that the Chinese have entered into an agreement with the Russians on the regulation of the import of cereal just in 2015. Shortly before that, after more than ten years of negotiations, they agreed with Russia to import natural gas. The Chinese took advantage of the moment when Russia because of disagreements with the West turned to China and therefore was ready for more concessions. For Russian this alleged loss seem unimportant. Along with the income from export of wheat is important to them in the long term to win in competition with the United States. That victory could be possible due to the reduction of wheat production in the United States, they prefer to remain silent.