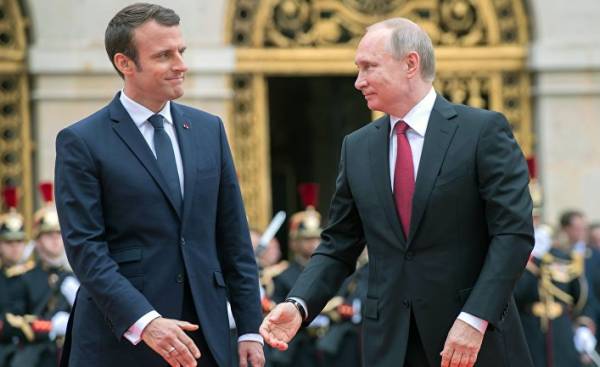 The main Russian TV channel “First” decided to give a subjective version of the first meeting, Monday 29 may, between Emmanuel Macron and Vladimir Putin. The main attention was drawn to the gilded interiors of Versailles, the handshake is warmer than with Donald trump a few days earlier, the chef presented the Kremlin leader and not on bilateral relations, Syria and Ukraine.

In “the intricacies of the Protocol” was not allowed to exceed these limits, reported Tuesday by the economic newspaper “Vedomosti”, which is not said a word about the “contradictions” between the two heads of state.

The biggest is an excerpt from the joint press conference of the two presidents, shown the same evening on the “First” was the reception in the Kremlin marine Le Pen during the French presidential campaign. Mr. Putin had to make excuses: “the most important thing for us is the fact that marine Le Pen has always advocated the development of relations with our country (…) But this does not mean that we were trying to influence the election”.

Putin was not ready for such an onslaught

“The Russian newspaper” chose to give the header with the address of the head of the Kremlin to the freedom-loving French people, urging them to fight the sanctions. Pro-government newspaper also stressed the “common ground” between the two presidents in their main goal: the fight against terrorism. However, the newspaper adds, Mr. macron made it clear that France is closely linked with the European Union.

The uncompromising position of the French President, which he boasted from the very beginning, sometimes surprising. “The President of Russia did not expect such pressure”, — writes the newspaper “Moskovsky Komsomolets”, which notes with humor that “old Europe has got a new “infant Terribl”.

Putin didn’t even know what to say when a macron called the state of the Russian media “agencies of influence and false propaganda,” the newspaper writes and adds that “the French in vain were afraid that Emmanuel macron will not stand the test of Vladimir Putin. He learned the principle of the three Musketeers: to not have to defend himself, immediately went on the attack.”

However, the claims of the French President to two major media agencies of the Kremlin, RT and Sputnik, which was denied access to the headquarters of the Macron due to their spiteful comments against the elected President, not gone unnoticed in Russia.

This is especially angered Margarita Simonyan, RT editor-in-chief. “If you follow the logic of Macron, all mainstream media should be expelled from Russia, as they all oppose Putin and the opposition”, — she declared on the channel “Russia 1” and in his Twitter.

After a three-hour meeting, “the two presidents have not shown any signs of warm relations, and not by accident,” writes the correspondent of “Kommersant”. “The press conference began quietly and ended nervously,” notes the independent “Novaya Gazeta” that summarize the performance of the two leaders in the midst of paintings of historical victories of France: a friendly exchange of views in the gallery of battles.

In addition to “Novaya Gazeta”, which first wrote about the Chechen persecution of homosexuals, none of the media did not mention the remark of Emmanuel Macron over the fact that his guest had promised to shed some light on this matter.