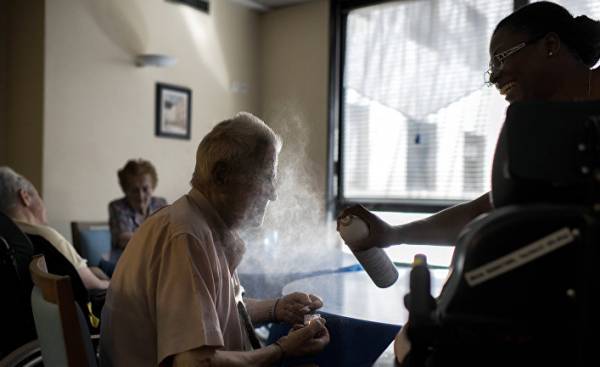 In Bavaria continue to operate unscrupulous care services who fraudulently receive from insurance companies large sums of money. “It definitely is about millions,” says Herman Imhof (Imhof Hermann), Commissioner of the Federal government for the interests of patients and of persons in need of care. The investigation showed the newspaper Süddeutsche Zeitung, currently in the crosshairs, the Bavarian investigators are “Russian care”. That is, the service, the management and employees of which are of Eurasian origin. Only the Munich Prosecutor’s office No. 1расследуется more than ten such cases. And in the North of Bavaria, investigators on the trail of crooks in the industry.

The number of cases being investigated, according to the company health insurance AOK Bayern has increased considerably. “To us each week with the growing trend there are reports of suspicious accounts from outpatient services,” notes the insurance company. Some of these relate care services, which belong to the Ukrainians, Russians, Kazakhs. Among them, along with serious, “the mafia,” says Imhof. His estimate coincides with the position of the land Department on criminal cases of North Rhine-Westphalia, which in early may released a report on the current across the country criminal networks. The report deals with money laundering, fraud, tax crimes in the industry to care for the sick.

Specifically this means the following: you will be billed for expensive services that never came to be. Counterfeited documents, documents evidencing the provision of services, importation of goods and the conclusion is also supported by “doctors of Russian origin”. Unscrupulous care services uses when providing services of unskilled staff, including fake certificates of education to get as much money as possible. Or charged for services for persons who needed such care.

“Nurses, as the main organizers, and consumers very often come from the former Soviet republics, primarily Ukraine and Russia”, — the report says. Sometimes the person requiring care and their relatives become complicit. Probably for that care pay them a few hundred euros a month, say the Berlin investigators.

But relatives of persons in need of care, certainly, there are those who are involved in this scheme from his “bed,” says Imhof. Without these partners the cheating scams are more likely would have been revealed — through checks of suspicious calculations by the insurance medical organizations. The data presented in the report indicate that support persons in need of care, or their relatives are sometimes forced. In the search for evidence under the guidance of the Prosecutor’s office of Dusseldorf were found “two the distruction of the Kalashnikov assault rifle and two units of semi-automatic weapons with ammunition”.

The Minister of health of Bavaria Melanie Huml (CSU) said on Monday: “We have all means to fight this fraud.” Huml draws attention to the fact that the report contained no data on the Bavaria, and referred to precedents from the land of North Rhine-Westphalia. However, as noted by Huml, it is known that, unfortunately, in Bavaria is a fraud, perpetrated by Russian-Eurasian-care services. That in this there is no doubt, according to data of the Ministry of justice in Munich, but also surveillance of employees of the Bavarian criminal office.

So, they noted changes in the criminal environment of Bavaria. Many women from Eastern Europe are involved now in the country as prostitutes, and in the field of nursing. “In the field of nursing, you can get much more money more easily,” says Dominique Schirmer, meet Bayern in OAK for consumer protection, that is, the against unfair care services. During the first three months of this year, there were 88 new cases of probable fraud. “In addition to the so-called Russian service, there are others, but in some cases they appear”.

As noted by the Ministry of the interior, Bavaria in February of this year established a new working group that will be used to combat unfair care services. In the middle of the year should be published first review and presented suggestions for improvement of police work in the field of fraud in this area.