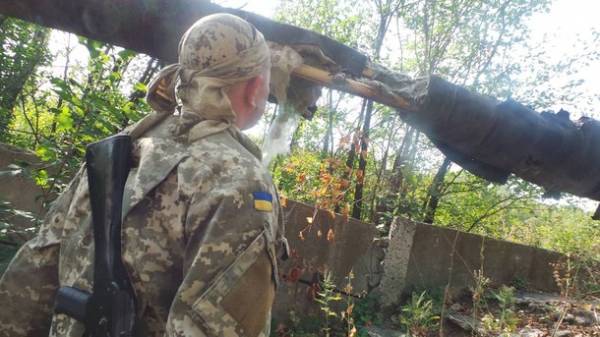 The Geneva centre for humanitarian demining (GICHD) and the Stockholm peace Institute (SIPRI) published a report which shows that last year Ukraine entered the top five countries by number of victims. the Reason for this are the fighting in the Donbass. According to the information of the General staff, since the beginning of the war in the East of the mines affected more than 1,800 people, including both military and civilians. And mine clearance may take from 15 to 20 years.

THE SAD LEADERSHIP. The Geneva center for humanitarian demining is one of the international organizations, which helps Ukraine to get rid of the deadly hazards of war. Recently, the GICHD in cooperation with SIPRI released a report which shows that Afghanistan, Cambodia, Mali, Pakistan and Ukraine last year became the leaders by the number of people killed.

In Mali, 2015 year saw the largest “mine” incident, when as a result of the detonation of a minibus killed four and injured 28 people. And in 2016, according to the GICHD, a similar situation occurred in the Donetsk region when a mine blew up a minibus, which injured 15 civilians (apparently, we are talking about the incident Marinka February 10, 2016; according to official data, killing three people. — Ed.)

Experts of the Geneva and Stockholm centres is estimated that in 2016 in Ukraine were 37 cases of exploding mines (48% more than in 2015), in which 43 people were killed and 58 were injured (4% more than the year before). Just as in the world in the past year, there were 181 case of exploding mines. Suffered as a result of 423 people, of which 195 were killed. That is, the share of our country accounts for 20% of all recorded landmine incidents and 24% of all people affected by mine explosions in the past year on the planet.

As said the speaker of the General staff of the ATO Colonel Vlad Voloshin, 2014 in a combat zone occurred 500 different explosions. 350 cases exploded a homemade device. Injured more than 1,000 civilians and over 800 soldiers. 170 soldiers were killed and about 650 wounded. Damaged more than 100 pieces of military equipment.

THE PROBLEM FOR DECADES. The problem of mine clearing of territories in the Donbas occurred at the outset of a military conflict in 2014. Most recently, on may 11, the press center of the ATO headquarters, during a mine blew up the bomb squad one of the mechanized brigades, acting on the direction of Donetsk. One soldier was killed and a second was hospitalized. Even earlier, on April 23, on the territory controlled by the militants of the so-called “LPR” in Luhansk region, a mine blew up a patrol car of the OSCE observers. As a result, one representative of the mission were killed and two were injured.

The April incident with representatives of the OSCE provoked an international scandal. First Deputy head of the Special monitoring mission (SMM) of the OSCE in Ukraine Alexander hug called for the immediate start of de-mining of territories, in order to prevent the death of people who live along the demarcation line. “Mines and unexploded ordnance must be removed. In addition, the parties must provide the map where they are (mines and shells. — Ed.) must be clearly marked,” said Alexander hug.

However, according to experts, humanitarian demining (in fact almost indistinguishable from the military, but specialists services for emergency situations) can take tens of years. Deputy coordinator of OSCE projects to Ukraine Geoffrey Ehrlich cited the experience of Croatia, where, 20 years after the war, the mine continues. And Deputy Minister on issues of the temporarily occupied territories and internally displaced persons Georgy Tuka called a term of approximately 15 years. “How long it will need funds — it is difficult to predict. The Croatian it took $550 million,” said Tuck.

Various international organizations provide Ukraine with financial assistance in mine action. For example, a month ago it became known that NATO spends more than a million euros for the development of the mine action service of the state service for emergency situations (SSES). As already reported, “Today”, NATO is helping the state emergency service in the framework of the programme “Science for peace and security.” Because of its high needs, Ukraine is the priority partner of the Alliance in this regard.

MINE WARFARE. Needs are actually quite high. As reported by Colonel Vlad Voloshin, since the beginning of hostilities demining group APU, SSES and Haspackage transport defused in the Donbass more than 250 thousand items of unexploded ordnance, cleared more than 1,000 km of roads and 650 km of Railways and nearly fifteen hundred different objects.

“In 2016, began the phase of so-called non-technical survey that is an essential component of humanitarian mine action. The survey is conducted with the participation of non-profit organizations and covers more than 12.5 thousand square kilometers liberated from militants of Donetsk and Lugansk regions. We came to the conclusion that 7 thousand hectares is indeed contaminated with explosive subjects”, — said Vlad Voloshin.

The representative of one of such NGOs, the British HALO Trust Yuri, Shahramanyan notes that the greatest number of mines laid near Mariupol, Kramatorsk, Slavyansk and Luhansk. “Besides, there’s a lot of unexploded ordnance,” he added, Shahramanyan.

The situation in the so-called gray zone, i.e. between the positions of the warring parties, Vlad Voloshin called “mine war”. “There is a war about stretch marks and various mine-explosive devices. Basically Russia is using various anti-personnel plastic mines,” said Colonel Voloshin. According to him, the Russian side’s use of anti-personnel mines due to the fact that Russia has not acceded to the Ottawa Convention on the prohibition of the use of such weapons.

Among other things, the Ukrainian military is dealing with anti-personnel fragmentation defensive mines OZM-72, which when triggered, jump to 70-80 cm above the ground, torn into hundreds of submunitions. But a normal stretch, according to Vlad Voloshin, also “evolved”. If usually they should look under his feet, the Donbas militants have learned to set them straight over your head. Especially need to be careful in urban areas. The officer recalled the case of Mallorcan, where in the premises of the railway station, the bomb squad found a grenade RGD suspended about two metres above the floor. From it dangled fishing hooks. “These hooks clung to clothing under her person, after which the grenade was supposed to fall to somebody by the collar and explode,” — said Voloshin.

According to him, a lot of booby-traps. For example, you should be very careful when you see lying on the ground a book, an empty plastic bottle or any other object. When you try to take it or just throw a leg may burst. “Infernal machine” may work unexpectedly, for example, if the person examining the room, accidentally stepping on some Board.

However, Ukrainian military are setting up their stretch marks. According to Vlad Voloshin, one of them mounted of f-1 grenades, worked in the same Mallorcan.

What weekends and vacations are the Ukrainians