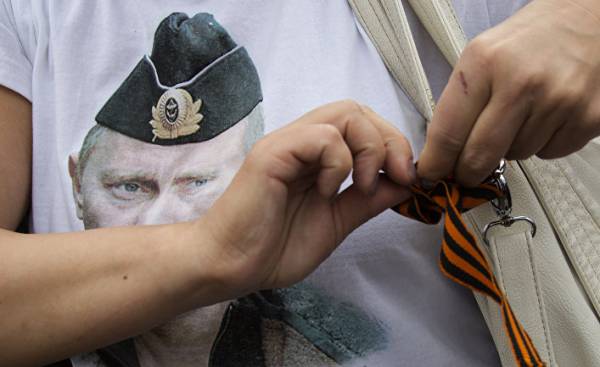 The US President Donald trump said that he supports the idea to bring Russia to justice over the annexation of Crimea and the situation in the Donbass. In turn, us Secretary of state Rex Tillerson called the implementation of the Minsk agreements and return Ukraine’s sovereignty over occupied territories is the main precondition for the return of the Russian Federation in the Big eight. Why such statements will not affect the position of Russia, when Vladimir Putin can leave the Donbass, “Apostrophe” said Russian journalist and publicist Leonid Radzikhovsky.

I did not attach importance to these statements. You see that happening in America. Trump must be constantly lazy with accusations that he is Russian agent. He tries to do it in this form. By themselves, these statements are absolutely meaningless. To what responsibility they can engage Russia? The sanctions that the Americans have imposed over the Crimea, quite insignificant. They will not increase sanctions. Unlikely.

America is the guarantor of security of Ukraine according to the Budapest Memorandum. But its function it was not fulfilled. Moreover, it will not run now.

The property trump cornered senseless and absurd accusations, and they get what they can. The first deeds and words trying to fight back. Now begins the most unpleasant phase of the investigation, Mr. Mueller (special adviser to the Robert Mueller is investigating trump’s ties with Russia, — “the Apostrophe”), during which you find out, let Lee trump justice. If you find that let, his deeds are bad. In this case, it is not up to the Ukraine and Russia. Will say that you need to declare war, but it will not help. In words you can declare war even with Russia, even with China, though with Mars.

He went to the East. It served as a huge success: sold the weapon for $ 100 billion, created almost a new NATO. It would seem that this should raise the rating and to change the situation. But does not raise and does not change. He came to the position that will say anything.

Trump statements, which today are a total “lame duck”, will not affect Putin. So it will not leave the Crimea and Donbass. The Crimea part of the Russian Federation (as a result of the illegal annexation in 2014 — “the Apostrophe”). To exclude him from this composition is possible only by changing the Constitution. It is impossible to imagine a situation in Russia changed the Constitution in order to “let go” of Crimea. If Russia will fall to pieces, it is not going to happen, but under normal circumstances it will not. Care and the advent of Putin, do not change anything.

With regard to the Donbass, Putin out quite easily. Him the Donbass not need any political or perovskom relations. Donbass impossible to change — no one would give a dime to Putin for this “treasure”. To leave the Donbass, Putin needs to exchange which you can sell to their voters. In Russia starts election campaign. Putin, apparently, is to participate in it. To begin the campaign with the delivery of Donbas is, at least, original. Putin to boast of nothing to this election: the economy, social life sluggish, the fight against corruption does not inspire anyone. The only argument that remains, is a huge foreign policy “successes”. In such a situation, he can not leave.

The only condition of leaving the Donbass — the total and unconditional lifting of sanctions. Putin needs an absolute guarantee the lifting of sanctions. Then he may begin to implement the agreement. I think this is the option that Putin could go. But the West will say: you are not first run, but we’ll see. It’s a stalemate. And it is connected not with the Donbas and Crimea, and that Putin and Russia are demonized in the West. Go for a new discharge and to turn 180 degrees against Russia the West is not ready. I’m not sure that Putin is ready — in the situation of a besieged fortress is not so good, but familiar.