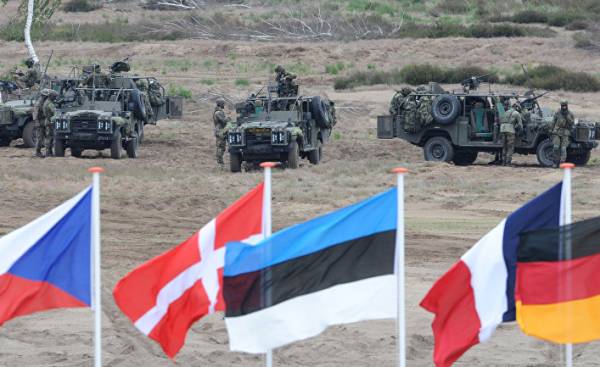 Tomorrow in connection with the NATO summit in Brussels meet some of the most powerful world leaders. With the American President, who has previously openly doubted that the United States should continue to remain a member of the Alliance, and Turkey, which is increasingly turning away from the West, NATO is undergoing its toughest period in a long time. Against this background, it is understandable why the newly started discussion about the common defence of the EU. Analyst on security issues Aronsson Albin (Albin Aronsson) examined the opportunities and risks in-depth defence cooperation within the EU.

The EU over the past year has taken several steps towards increasing cooperation in the field of defense and security. Development in this direction is especially important for Sweden, the state, which is part of the EU, but remains outside of military alliances. In this regard, there are many opportunities and risks it is important to isolate and analyze.

Maybe it’s partly surprising, but it is Winston Churchill known as the man who for the first time in modern history, who proposed to create a common European defense. When Churchill in 1950 he put forward this proposal, the world was restless. Our time is much like the period — the war in Ukraine, the devastation in the middle East and other geopolitical changes. This explains why the European Commission and some EU countries are so enthusiastic considering the potential increase of the EU role in defense and security.

They make suggestions, aimed at deepening defense cooperation, which were made in recent years, has gradually become more specific. Spring was created by the General headquarters of the EU, albeit in General terms, and was allocated to defence investment Fund and technology development. Now the preparatory steps largely depending on whether the will of the EU further in the permanent structured cooperation (PESCO so-called), and whether you need to eliminate obstacles to finally get the opportunity to use the battle groups of the EU and to develop a more coordinated defense planning. Even if at first glance these proposals seem innocuous, they would be a significant step towards the creation of competing with NATO.

So what opportunities does an in-depth defence cooperation? Because of the decrease in the last decade, defence budgets throughout Europe there is a high need for investment in new research in the field of armaments. Although the armed forces in some way and have access to advanced technologies, we need fresh ideas and the ability to fully benefit from increasingly accelerating development of artificial intelligence, big data, and the like.

A high degree of capabilities of the armed forces of different EU countries there opens a wide field of activities. As a theoretical example, we can say that each EU country will not have to develop all the military branches: Germany and Sweden will focus on the construction of warships, and Poland and the Baltic States — on the production of tanks. At the same time, the defense of the country is closely connected with its history, which could become an obstacle to the realization of the idea according to which countries would have to loosen control over its own military industries. Should not be underestimated and legal obstacles.

The development towards a common European defence carries certain risks. As soon as taken more steps to deepen defense cooperation, more important is the question of responsibility. Where must the member state and the EU, in NATO, in the event of a crisis: on the political decisions of NATO, the North Atlantic Council, or the Committee on security policy of the EU? This initial uncertainty leads to more instability when it comes to the decision-making process. Neither the Committee on security policy, nor the article on solidarity, 42.7 EU do not provide today durable institutional mechanisms that would be effective enough in case of martial law.

Apart from the question of responsibility and decision-making process, there is still the aspect of combat power (“combat power”), which can be translated as the performance of military forces in the process of waging war. To be effective, we need many exercises of the multinational forces. This is especially true when we are talking about exercises with the participation of a large number of groups. The NATO membership was 70 years joint exercises and the conduct of hostilities, including in Afghanistan and Kosovo.

The EU today there is no similar institutional structures to organize such large-scale exercises with the participation of many States. Without the US and the UK, it would require the commitment of considerable resources, and it is doubtful that EU members are now willing to incur such costs.

Within the EU there is also the risk that an in-depth defence cooperation increase the differences between member countries and will further alienate those voters who are already skeptical towards European cooperation.

As we can see risks and opportunities in a project of this scale a lot. If all this is to generalize, however, it appears that one of the emerging risks may be more serious than others. Namely, the project may unnecessarily reassure the part of member States of the Union, while not scaring enemies. Historian Michael Howard (Michael Howard) differencial both of these concepts, saying that a safety net is designed to assure his country and close allies that benefit from advance preparation for a possible conflict less than the cost in the case that the conflict is really going to happen. Deterrence also requires the ability to convince an adversary that the costs of trying to solve a problem by force will be more potential winnings.

The problem for the EU in this case is that the project for the deepening of cooperation risks have only a sedative effect, but not a deterrent. To European defence had a real deterrent effect, it takes a long time to invest significant resources. In the current situation it is doubtful that there is political will to create a European defense cooperation.

Thus continue to build a European defense, not putting in sufficient resources, is to increase the risk that the EU will feel about security. In the worst case, European cooperation will crumble if the crisis will occur. So the prospects for successful development of common European defence in the near future seem to be very limited.