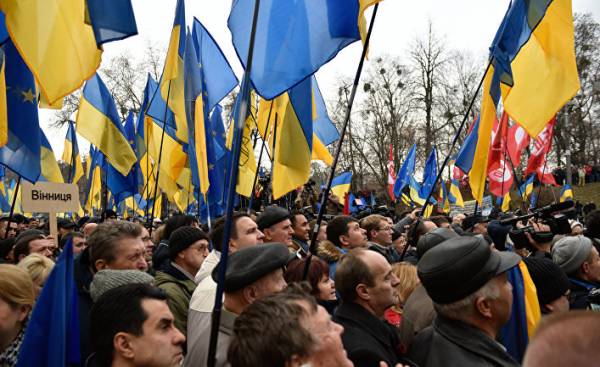 The specter of separatism loomed over another area of Ukraine: in may, Ukrainian security officials prevented the holding in Exactly a rally for “people’s Republic”. Military expert Oleg Zhdanov considers that such sentiments can ignite in any region of the country — it is only a matter of propaganda and brainwashing, and the Russian intelligence agencies just focus on working with local authorities, who are fighting for greater independence from Kiev. About the threat of federalization, the expert told the “Apostrophe”.

Events in Ukraine are wound. I understand that elections can not be avoided. Moreover, the President’s team loses key positions, such as the national Bank of Ukraine. Not just because Gontareva resigned, she ran away, especially after a visit to Washington. She came and declared a working day to your last day of work and articulated it to the whole country via the media. She basically told everyone she did not wait for the decision of the President, the Verkhovna Rada. She just stupidly said, “I quit” and slammed the door. And now she is supposedly listed on a permanent vacation. The President has no one on the bench and the national Bank — key player in the economy of the country. Such a move suggests that the President’s team slowly falls apart.

And now there is intensification of political forces, especially opposition bloc. I understand that it may be a new policy of the Kremlin towards Kiev: failed by military means to conquer us, and failed us curb moral-social problems — loss, war attacks, and they will try to take revenge from the political point of view. This can be seen on the billboards that post the opposition bloc, according to their statements.

About which region of Ukraine is willing to play the separatism, I’ll tell you this: any. It is a matter of propaganda. The question of availability of money and the degree of brainwashing.

I’ll give you an example. When Yeltsin was re-elected for a second term, his main rival was Zyuganov. Zyuganov had a real chance to become President Yeltsin’s rating was much lower. What did they do? Six months they threw the whole country the slogan: “vote or will lose”. And the amount of advertising exceeds the limit. However, in the end Russia voted for Yeltsin. If you have a goal and means, it is possible to rock any region under any social protests, explosions and the like. And what flag will be on the crowd — the crowd won’t care anymore. If you pick up people and put them on the street, the slogans and flags, believe me, you can put any.

The mood of the people in Ukraine are very sad in economic terms. People live in their environment, looks at the social situation around him, looking at his salary. And when the rally comes to a head, the mayor or head of the village Council and begins to tell who is guilty and what to do. And then the crowd, if people believe the leader, into an organized mass. This is what Lenin did in 1917: he sent agitators to the people in the army. The result was the revolution of 1917.

Clan our state system is in the process of decentralization, the local clans have actually create your controls. Ukraine is full of private military companies — they are just not legalized. You know, as they are now legalized? Using the municipal police. Almost all cities created municipal police. And local governments writing their own laws for that of the municipal police and through the Verkhovna Rada are trying for them to achieve the status of law enforcement body, which will give them authority on the basis of the law of Ukraine on law enforcement.

Today, they create municipal police and tomorrow they will create a battalion of territorial defense, armed it, and the next day will say: why do we have 80% tax to give to the center? We, at best, give 10 or 20%, the rest will keep. And will inside yourself to cook and make their own laws. That’s what the lack of the party line (no matter how it sounded, the definition of the terminology of the Communists) leads practically to the collapse of statehood in the country. By the way why not have now to create the formation of the territorial defence, did not create the reserve army — all died again on the paper in the General staff? That’s the reason. It’s all the criterion of strengthening local authorities.

The lack of hard purposeful control of Kiev gives the opportunity for local clans to create their own pockets of the state. Tomorrow the issue of federalization can stand squarely in the country.

I don’t think anyone will dare today to go out with tricolor, as it was in 2014, they had a pretty bitter experience and great loss. Today it is in the public antagonistic mood. But to support some of the clans that will declare the Pro-Russian slogans and lead a Pro-Russian policy — here a wide field for activities of intelligence services of Russia, where they will now to act. A Herculean effort will be made to maximise to the greatest number of votes, especially in local councils.

So already an existing power in the country leveled system of the Central government, destroyed the car on the governance of the country that does not even make sense to aspire to the Verkhovna Rada. Now we need to take local advice, we need local councils to have the vast majority.

The decentralization programme of the country in 2017 was supposed to be elections to local councils under the new law after the administrative-territorial reform. I understand that if we manage to destabilize the situation before the early elections, the next elections can happen in local councils. Making a rehearsal for election to Parliament, knowing where what who support what the electoral field, immediately have to take local advice. How to cut down the Yanukovych regime? Regional councils came from the subordination of Kiev. Every day we have heard the statement one, the second, the third regional Council that we go out of the Kiev Central government. Here, the same may now happen in the country.

Hopeless situation does not happen. But the authorities need to radically change its policy, it is necessary to turn toward the people, not the money in the checkout lie. Now they saw the budget. How can so many take — such is the policy of the government. In order to save the situation, it is necessary to turn to the people. First we need to mold the clay colossus for strengthening of state power, and to start to restore order in this power. Using the same electronic Declaration should be given the opportunity to run a National anti-corruption Bureau, we need a high-profile trial, open the desired landing, starting with the highest echelons of power.