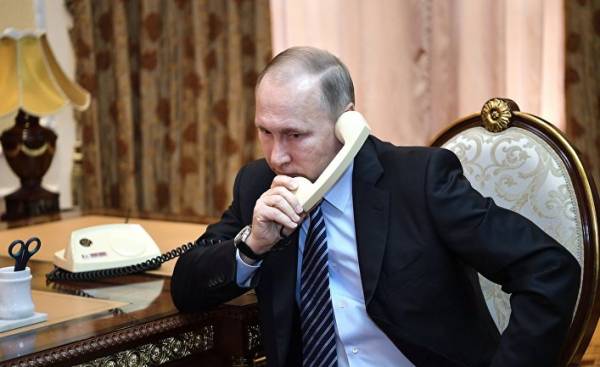 After the attack in Manchester Vladimir Putin strongly condemned this cynical and inhuman crime. This is the usual diplomatic procedure, which does not diminish the sincerity of the condolences. After the attacks of 11 September 2001 against the world trade center in new York, the Russian President was the first who expressed his condolences to the American people.

But politics is always. In the same appeal to Theresa may, he expressed readiness “to develop anti-terrorist cooperation with British partners on a bilateral basis and within the framework of a broad international effort.” This proposal is riddled with regret, which is more widely expressed by the Chairman of the Federation Council Committee on defense and security Viktor Ozerov. He said that the terrorist attack in Manchester should be a lesson for British intelligence, who refuse to cooperate with their Russian colleagues. He reminded that Vladimir Putin called for a “United anti-terrorist front, which would act on the General rules and not on the basis of double standards.”

These words demonstrate dissatisfaction with the Russian leaders dual game Western partners. On the one hand they condemn terrorism, when they themselves become its victims, and on the other directly or indirectly support organizations that are considered terrorist by Moscow and oppose the policy of Russia, in particular in Syria.

Vladimir Putin calls for more intensive international cooperation on the basis of practical and political considerations.

From a practical point of view. Russia itself has repeatedly suffered terrorist attacks in recent years. First, the terrorist threat came from the Caucasus, during the war with Chechnya in the 1990-ies. Vladimir Putin came to power during the second Chechen war and promised to “RUB out terrorists in the outhouse.” He kept his word, he drove the separatists and handed over power to the Kadyrov family. Ramzan Kadyrov has established Sharia in Chechnya that may seem step, contrary to the fight against Islamism, but being a student of the Kremlin — saying that it has to do with the murder of Boris Nemtsov in 2015 — he’s untouchable. Terrorism “weak tension” still exists in some Caucasian republics of Russia.

First, however, authorities are concerned that about 4 million Russian citizens and 5 thousand citizens of the former republics of the Soviet Union who joined the Islamic state (a terrorist organization banned in Russia — approx.ed.) in Iraq and Syria, may return to Russia to commit terrorist acts. The explosion in the subway in St. Petersburg in April, which killed 15 people, was made a citizen of Kazakhstan. In 2015 terrorists of the Islamic state blew up the Russian plane that was flying from Egypt. Killed 224 people.

Thus, the interest of Moscow in cooperation with the security services and intelligence agencies to prevent terrorist attacks is understandable. There is political interest, but this is a weak spot. With the beginning of the fight against ISIS in Iraq and Syria, Vladimir Putin expressed his willingness to become a member of the international coalition. The response of the US and Europe was, to put it mildly, cool. They were accused Russia that she supports Bashar al-Assad, whom they consider a threat to his own people and one of the culprits in the spread of radical Islam.

In the fall of 2015, Russia began a massive intervention in Syria and tried to impose its presence to the international coalition involving Western countries and several Sunni powers in the region. The cooperation was reduced to minimum. Russia and the coalition signed an agreement on the prevention of incidents between the armies of the parties. Anyway, beyond that interaction went. No one was able to agree on the definition of terrorist groups that the Kremlin has put all the enemies of Bashar al-Assad, while the West was unhappy that the Russian aircraft often beat his allies, not by the IG.

Sounding in Moscow, the rhetoric is not too different from what you can hear, for example, in Paris. “Performing combat tasks far from their native borders, we directly contributed to the security of the Russian Federation”, — said Vladimir Putin. The fight against terrorism will be one of the issues on the agenda of his meeting with Emmanuel Macron at Versailles on may 29. Today cooperation with Russia stumbles not even on the list of groups deemed to be terrorist (all of them suffered heavy losses as a result of Russian and Iranian operations in support of the Damascus, while ISIS is retreating on all fronts), and the alliances of both parties.

Vladimir Putin has repeatedly criticized terrorists receive “the hidden and open support by some countries”. First and foremost, he meant Saudi Arabia and Qatar. The West in turn looks with distrust on the actions of Iran and its associated militant movements like Hezbollah. Statements of Donald trump during his visit to the middle East situation does not improve. He restored weakened under Obama’s ties with the Sunni monarchy, and accused Iran, the terrorists in destabilizing the region. Such conflicting alliances do not contribute to the fight against terrorism, and only increase the intensity of the confrontation between Shiites and Sunnis on the one side Iran and the Gulf countries on a couple of Israel on the other. As a result, the tension is not reduced, but growing.