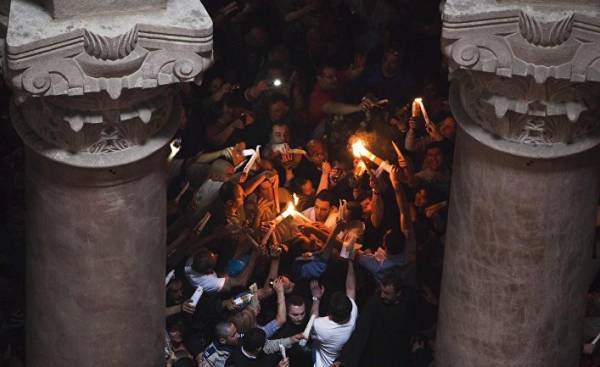 For 15 years the delegation of the Russian businessmen, artists and officials brings to Moscow the “Holy fire”, which, according to Orthodox tradition, carried out of the sepulchre in Easter Saturday.

The streets of the Armenian quarter of Jerusalem is Packed with people. The cool morning wind blows a dense crowd of believers, in which there are pale faces of the Russians. Slavs and Caucasians in serried ranks moving forward toward a common goal: the Church of the Holy Sepulchre, which was built around the tomb of Christ.

From Jerusalem to Arbat

While the procession stopped, Alena Novgorodova takes a breath and adjusts her headscarf in the colors of the Russian tricolor. She and her husband come every year for Holy fire, which is then transported to the ward on the Arbat. “If a flame comes, the Lord gives humanity another year, she explains. — If not…”

On the neck of a businesswoman hanging gold cross. She had faith later, during the first trip to the Holy land in 1999. Since then, faith has been Central in her life.

“The symbol of our country — the two-headed eagle. One head — worldly power, and the second is spiritual” — she said, linking Russia’s return to the forefront on the international stage with the revival of Orthodoxy, the symbol of which was the construction of thousands of churches after the collapse of communism. Her husband, a police Colonel, prefers to stay back and remain silent. She speaks for him and tells of many awards, including medals “For courage”, which he recently handed over Vladimir Putin. “Our President does not hide his faith,” she said.

Officials and artists among the pilgrims

Given an invisible signal. The crowd resumes its leisurely progress to the temple. Among the believers are about a hundred representatives of the delegation of St. Andrew Foundation.

These people are in jeans, shirts and sneakers are not simple pilgrims, despite their modest appearance. High-ranking officials, heads of corporations, Deputy Chairman of the Duma deputies, successful businessmen, prominent artists — they are all rotating on an orbit of the Kremlin part of the Russian elite.

Constantly look at the phone Maria Zakharova, representative of the Russian foreign Ministry, the first time traveling with a group. Although she arrived on an unofficial visit, she agreed to a meeting with local journalists “at the request of Israeli diplomats.”

An act of faith for Russia

After having received the fire, she takes him to Church suburban Vertline, where she is giving. My husband and children await her there for the Easter vigil.

Maria Zakharova was baptized in 1990-ies after a trip to the Holy land. It says a lot about the revival vertinskogo of the parish by the local priest in 2000-ies. She would like to see all of this became an example for striving for spiritual and material development of the Russian youth.

“For a long time I prayed only for the family, but recently started to pray for the country, which had to go through so many injustices in recent years, she continues, once again feeling himself in the shoes of the representative of the foreign Ministry. — Yes, I’m very worried about the future of the world”.

A sea of people at the tomb

By that time, as believers, finally, come to the Church of the Holy Sepulchre, the sun is already high in the sky. Getting closer, sweat stands out, blushing face. Join believers inside human stream. Someone is afraid that his crush. Sometimes there are skirmishes.

Priests in black cassocks trying to direct the flow of the faithful on entering the Church, which used Greek-Orthodox, Catholic, Armenian, Coptic, Syrian and Ethiopian churches. One part of the Russian delegation is sent to the Armenian area, the other in Greek.

Space to accommodate has been a long time agreed, but in the General chaos of the arrangements seem to have forgotten. After a lively dialogue with the Armenian priests, who are willing, if necessary, to play the role of bouncers, Russian pilgrims manage to squeeze through and take a seat a few metres from the tomb of Christ. The Ministers and heads of States of the Christian world make their way through the human sea close to the rotunda, which houses a stone on which lay the body of Jesus.

Officials at the forefront

The head of St. Andrew Foundation Vladimir Yakunin is in the first row. This ally of Vladimir Putin and the former head of RJ heads the Russian delegation, which had visited in Bethlehem. He talks with the Orthodox Patriarch of Jerusalem, talks with Israeli officers, acting politely and carefully.

68-year-old Yakunin is engaged in the promotion of Orthodoxy and traditional values (family, homeland), with which the Kremlin seeks to unite the Russian people around ideology. “We’re not at the behest of the state — says a former member of the KGB. We are doing this because we believe and we believe that it is important for our country. When we started this work, few in Russia who share our values. Good that the government and the population today support our values and ideas. Anyway, the influence of Orthodox Christianity cannot be compared to the influence of communism in the Soviet Union”.

The noisy and hectic atmosphere

As a pure product of the Communist system, Vladimir Yakunin admits that later joined the faith rarely goes to Church, prays regularly, though. Every year at Easter, he receives the “Holy fire”. “The Patriarch has blessed us on this trip, he said. And that’s enough for us”. In 2011, he created the “tour” belt of the virgin Mary, who brought the Greek mount Athos in Moscow and several provincial Russian towns. Hundreds of thousands of believers stood for hours in queue to touch the Shrine.

“The Fund plays an important role, — said the Orthodox Bishop Irinarch. In particular, it popularized in Russia the ceremony of the Holy fire”. This approximate Patriarch Kirill silently standing a few meters from the Sepulchre under the impression from the hectic and noisy atmosphere. Standing for four hours faithful have a hard time. Thirsty. They want to sit or at least lean against the wall.

Suddenly, in the rotunda of the light. Around screaming and splashing emotions. The fire passed from hand to hand. Few mine the faithful rush to the exit with candles, drops of wax from which fall on their clothes. The Russian delegation, lost no time in heading to the airport in tel Aviv, where she rented “Gazprom” the plane.

In Moscow it will meet dozens of believers who will carry the Holy fire to Vladivostok. Vladimir Yakunin will give the fire Patriarch Kirill at the Cathedral of Christ the Savior in the presence of Vladimir Putin.

According to the Constitution, Russia is a secular state, which guarantees equality of all religions before the law. However, in fact, the Orthodox Church plays a pivotal role and maintains close ties with the regime of Vladimir Putin. Two-thirds of Russians call themselves Orthodox. After the collapse of the Soviet Union was built thousands of churches. At the same time, the number of active believers in Russia and the former Soviet Union does not exceed 8%.

The Russians support the values of the Orthodox Church provided that she did not climb in their private life. On the main public issues, they hold about the same views as their European neighbors: the couple divorced more than half of the cases, religious education in school is hampered by hostility (for it is only 13%, according to Levada-center), and the attempts of the Church to influence public decisions meet the rejection (66% of citizens against it). 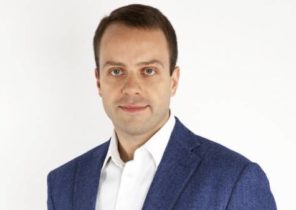