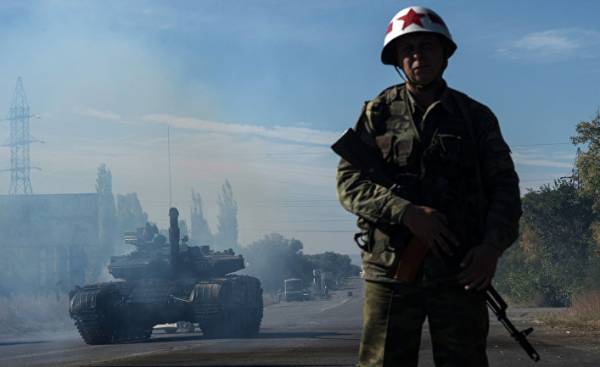 Before the Ukrainian authorities face the problematic question: whether to establish a cordon Sanitaire along the territory of the separatists, who receive military and financial support of Russia, or to develop economic and administrative links with their population in the long term reintegration of Donbass? From Kiev’s answer to this question will largely determine the future signed in February 2015 Minsk agreements, which provide for the granting of autonomy to the Donetsk and Lugansk regions in exchange for the restoration of the Kiev authorities in the territory and to transfer control on the border with Russia.

After months of hesitation, President Petro Poroshenko has sharply inclined towards the first option under pressure the most irreconcilable representatives of Parliament and civil society. On January 25, ultranationalists of the volunteer battalions and demobilized with the “anti-terrorist operation” in the Donbass military camped on the railroad tracks to block trade with the “occupier.” In particular they have blocked coal supplies from these regions, which, despite the war, still used for the Ukrainian thermal power plants (give 15% of all domestically produced electricity). March 25, two days after the failed attempt of the police to drive away from the ways of the activists, the national security Council and defense announced (this time official) prohibition of trade with the “occupied” territories. Thus, the government responded to the final loss of major industrial and mining assets that were nationalized by the self-proclaimed republics in response to the blockade, and tried to seize the initiative.

In July 2016, a group of 27 deputies headed by the opposition party “Samopomich” (calls himself a continuer of the traditions of European social Democrats) introduced a bill to “temporarily occupied territories”, the vote on which had not yet been held. Some members, themselves former members of volunteer battalions, have actively supported the blockade that draws far less reasonable picture of the political orientation of the party compared to what it would seek abroad. The text notes that “the obligation on payment of pensions and social benefits shall be fully borne by Russia as a state-occupier”. In addition, the bill provides for a sharp reduction in the movement of goods and services (excluding humanitarian assistance). “Sometimes the soldiers get an order to stop the advance to skip the trains with coal. It is unclear for soldiers and incompatible with the requirements of national security”, — says Vice-speaker of Parliament and member of the “Self-help” Oksana Rawfoodist, taking us in his office in the Parliament building, which is now unusually quiet at the end of the session. Expected on the bill, the supply of water, fuel and energy resources must be stopped so as to form to prevent infiltration and arms smuggling “cordon Sanitaire”. After the return of territories (in the future) the people will have to go through a transitional period of martial law and the restriction of freedom of information. The Deputy did not rule out reconciliation, but “only in respect of forced collaborators” as she calls the people who remained in the unrecognized republics because of lack of other prospects. For those who participated in the fighting, and worked in the administration, no Amnesty, of course, will not.

Anyway, the Parliament is preparing a completely different bill. “We don’t need to give up the occupied territories, to isolate them and to build a wall” — does not hide indignation of its author Mustafa Nayem from Bloc Poroshenko. He outlines the scheme before us, teoretiziruya about drag Ukraine vital forces of Donbass in the face of his youth. In his view Ukraine is in the Western camp with the exception of its Eastern part, which is still in the “former Soviet Union”. “We need to act against the Donbas as well as the West acted in Ukraine after the collapse of the Soviet Union, that is active in funding civil society, to rescue him from the Soviet past, to create conditions for the emergence of leaders who will speak about democracy and freedom of speech.” According to him, scholarships and special programs revenues will attract some 50 thousand young people each year graduate from the school in the Donbass.

Despite important differences, these two approaches have one common feature: the recognition of uncontrolled Kiev territory of the occupied area. Adoption of the word “occupation” in the law ultimately undermine and so indecisive policy was created in April 2014 of the Ministry of the temporarily occupied territories and displaced persons. In January its head Vadim Chernysh proposed a plan for the reintegration of Donbass, consisting of 14 items: benefits for enterprises support program of the Ukrainian language, sports, local access to essential goods and social assistance. Once military victory is not everything, you need to “battle for the hearts and minds”. Anyway, the Ministry has no funds to implement this program. “Our budget is 25 million UAH [875 thousand euros], and we would need another 2 million just for salaries and rent,” — said Deputy Minister George Tooke in the office above the Desk hangs a photo of the charred skeleton of a car in an industrial area. “War photographer who became the fighter of a battalion “Azov” (the organization was banned in Russia — approx.ed.) took this picture in Avdeevka”. With the beginning of the year in this city, located on the Ukrainian side of the frontline in Donetsk oblast, there is an intensification of the fighting.

Working in the frontline people, in turn, Express concern about the humanitarian consequences of the blockade, especially considering the fact that already suffered from the fighting, the infrastructure is located on both sides of the demarcation line. For example, the regional enterprise “Water of Donbass” is engaged in water treatment and water on both sides of the front. “We are waiting for the decision of problems of the Minsk agreements”, — said financial Director Victor Zavodovsky. To deprive the self-proclaimed Republic of fresh water is hardly feasible task is the channel Seversky Donets — Donbass began in Slavyansk on the territory of Kiev, then across the line of contact in the direction of Donetsk, and finally, moving to a government controlled army of Mariupol. On the territory of the DNI still has 7 of the 11 thousand employees of the company. One pay cash in rubles, others in UAH (especially those who regularly have to travel across the border). “After the blockade we can’t bring in the DNI needed for maintenance of equipment without a special pass. Even the chlorine we get from Russia as humanitarian aid.”

The desire to circumvent the projects, which involve the recognition of the status of the occupied territory, Poroshenko announced the upcoming law on “restoration of the territorial integrity of Ukraine”. “Our Western partners don’t understand why Ukraine needs support (…), since some political forces inside the country has set a goal to get rid of part of the Donbass and to push into Russia several million Ukrainians”, — he said in March at a meeting of the Council of national security and defense. In any case, this process is already well advanced, and the President has not yet been able to stop him. 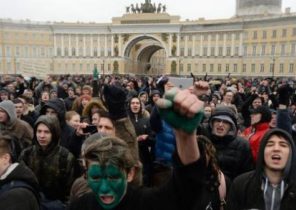