Why crusade of Putin in Syria is as supporters and defenders in France and Europe? A clear and logical answer is hard to find. For the Pro-Putin front in Europe hides a lot of currents, in very different ways of perceiving the situation.

The first period considers only the opponents of Bashar Assad are jihadists. At the same time it does not want to recognize the role of the Syrian leader in strengthening the Islamists since the beginning of the revolution in 2011. Three leaders of the most influential Islamist brigades was pardoned by the President may 31, 2011, three months from the beginning of the revolution. At the same time the prisons were Packed with young revolutionaries and the political opposition, and the streets flowed the blood of those shot by the regime of peaceful demonstrations. Released from prison Saidnaya leaders of the Islamists had been killed in the past year, the head of the “army of Islam”, Zahran Alloush and eliminated in 2014, the commander of “Ahrar al-sham” Hassan Abboud. The leader of the “Sukur al-sham” Ahmad Issa al-Sheikh contained in another prison. As for the “Islamic state” (a terrorist organization banned in Russia — approx. ed.), there is no doubt that it has entered into a tacit Alliance with the Syrian regime.

Target strikes Damascus and its allies are already the proof that he always thought of IG is not the real enemy, but rather a convenient bogeyman for the retention of power. This rebels expelled the militants from Aleppo and Northwest Syria in late 2013. In this case they are the target of the most massive blows and attacks of the regime with the allies. In addition, claiming that the Bashar al-Assad is a bulwark against terrorism and Islamism, forget or deliberately silent about the existence of unarmed and non-Islamist opposition. According to them, all Syrians who are not Islamists and are part of a religious minority, automatically support the regime. However, many Christians, Druze, Ismailis and alawites were killed under torture in the dungeons of Assad because of the rejection of the regime, and many others continue to rot in these prisons, which human rights activists called concentration camps.

Another examines the conflict through the prism of conspiracy: the war in Syria linked to the “oil and gas pipelines”. In addition, this approach allows to justify the rigorous support of the butcher of Damascus and turn a blind eye to his crimes and barbarism under the pretext that he is fighting a conspiracy by Saudi Arabia, Qatar and the CIA. Despite the lack of evidence and real facts, this story is actively spreading Pro-Kremlin circles and beyond. Seeds are falling in fertile soil after the American invasion in Iraq and the falsification of its causes. As a result, any wars and conflicts are transformed into the fruits of the conspiracy for control of oil and its channels. Popular revolt seems to be something unimaginable representatives of this trend, although it combines left-wing figures who allegedly put first people.

Finally, there are ardent fans of Putin and his exaggerated nationalism, which is actively used arguments to justify the Kremlin’s actions. Nothing can stop a movement which likes strong people with a simple (albeit often unrealistic and vile) ideas.

The front is typical of a considerable ideological distance between “members”. However, in Syria and Putin these ideological differences seemed to evaporate. At the end of August 2013, françois Fillon, marine Le Pen and Jean-Luc Mélenchon was against US, UK and France for the destruction of military facilities of the Syrian regime in response to the chemical attack in ghouta. Mélenchon claimed that “war would be a complete mistake.” They all talked about one at the same time. In parallel, the representatives of the Kremlin has launched a major campaign “against the war in Syria,” which picked up close to the ultra-right associations and policy. Advocacy bore fruit when the British MPs rejected the proposal for intervention, which forced Obama to backpedal. All these lovely people were against the attack on military targets in response to large-scale chemical attack, the purpose of which were ordinary Syrians. Of course, in the name of peace.

This diverse front will always be arguments when it comes to defending Putin and his crusade, the war, which is called legal and preventive campaign for the protection of the Alawite and Christian minorities.

The assertion that unlike the Bush campaign in Iraq, Putin’s intervention is perfectly legal, since it was initiated at the request of the legitimate President, is completely absurd. Is it possible now to talk about the legitimacy of Bashar al-Assad, the heir, who in a coup in 1970, came to power in a country where since then has not held free elections? What is the legitimacy of someone accused of crimes against humanity and war crimes? If we accept such arguments, then Kim Jong-UN, Pol Pot and Pinochet, too, are legitimate leaders.

The concept of “preventive war” (rightly) been condemned in Europe during the American invasion of Iraq, but today is supported by many leaders, parliamentarians and political analysts. “Putin’s intervention in Syria in September 2015 would prevent the massacre Alawite minority and the expulsion of the Christians to Beirut”. This running along the channels of the Kremlin propaganda argument is a reflection of many politicians, for example, Thierry Mariani (Thierry Mariani). It would be preferable for the Deputy of the secular French Republic was worried about the fate of all Syrians, not only Christians and alawites. Should I remind Mariani and all supporters of Putin’s intervention in Syria is that the vast majority of casualties in Syria — peaceful Sunnis? The vast majority of victims among the civilian population — the conscience of the Syrian regime and its allies? January 4 Syrian center for human rights released its annual report on the number of victims and the responsibilities of the parties for the deaths. Here are some figures from it:

Figures peremptory, and although the trend in recent years indicates an increase in the number of crimes by opposition groups, Bashar al-Assad and his allies bear the greatest responsibility for the humanitarian disaster with the start of the conflict. These data are merely a reflection of the strategy adopted approved Assad and Putin: the deliberate and systematic attacks on hospitals, schools, assistance centres, humanitarian convoys… the Capture of Aleppo was carried out only under the threat of total destruction of the civilian population. Thierry Mariani and all the apologists of the axis Moscow-Damascus-Tehran patronage guilty of war crimes and crimes against humanity. Their place is in the dock, not in the state departments of France.

How can you believe for one second that Putin, in whose hands the blood of opposition members, journalists and 200 thousand Chechens started the war in order to save human lives?

And even if we imagine that Russian intervention helped avoid a massacre of the alawites and the expulsion of Christians from Syria if you can accept the fact that it was the murder and expulsion of the Sunni majority?

Thierry Mariani went on a trip to Damascus in solidarity with the “oppressed Christian communities”. The message is clear: Sunnis can die. Hatred and contempt for Mariani and his ilk hate the Syrian children. The hatred and contempt can lead to tragic consequences for our country. As such the message of the Deputy of the Republic will be perceived already branded all French Muslims?

Mariani ought to follow the example of Pope Francis, who called on Assad to stop the bloodshed, and the European leadership to accept more refugees. 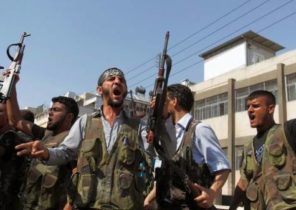